Cabin In the Sky: A Review

CABIN IN THE SKY

In My Father's House, There Are Many Cabins...

For whatever faults the Golden Age of Film has in regards to positive portrayals of African-Americans (and they are a heaping helping), every so often a film did come out that made an effort to show African-Americans in a more positive light.  Granted, they came from a thoroughly Anglo viewpoint, since apart from pioneers such as Oscar Micheaux, blacks were not allowed to work behind the camera to tell their own stories.  Even worse, scenes that featured African-Americans were summarily cut from films once they played south of the Mason-Dixon line.  Something as innocuous as Bill "Bojangles" Robinson dancing with Shirley Temple caused Southerners fits because here was this black man holding hands with a white female (never mind that she was a child who was thoroughly oblivious to the idea that her holding hands with her friend could be scandalous).

Cabin in the Sky cannot do that because it is an all-black cast.  Like many productions of the time, Cabin in the Sky had lavish production values (black or white, it WAS MGM, and they weren't about to skimp on production value).   While it wasn't a large risk to adapt a successful Broadway musical to the screen (something that happens with more frequency today), it was a risk to adapt an all-black musical which might not be seen by a part of the country.  What then, are the end results of Cabin in the Sky?  Some wonderful music and legendary performers showing us they were more than equal to their Anglo counterparts.

God-loving Petunia (Ethel Waters) loves but worries over her husband, Little Joe (Eddie "Rochester" Anderson), a gambler and womanizer.  She thinks he's come over to the Light, and he sincerely wants to, but we find Little Joe still falls prey to temptation, or rather, is pushed into gambling by those he owes money to.  At the gambling house, Little Joe is shot.  Fighting for his life, Petunia prays to the Lord to spare him.

Her prayer is answered in the most curious way.  Lucifer, Jr. (Rex Ingram) has come to collect his newest servant, but Petunia continues her prayers, which are answered by The General (Kenneth Spencer), who brings his Soldiers of the Lord.  There is a question of who exactly owns Little Joe's soul: Lucifer or The Lord.  In short, they've come to an understanding: Little Joe has six months to change his ways, otherwise the Devil takes him.  The catch: Little Joe won't remember any of that, but will sense both the Angel and the Devil at his side.

Little Joe has got the intense love and faith of Petunia, but Lucifer Jr. is determined to win one for Pappie.  He now plays a card of his own: have gambler Little Joe come up a winner, and get him with a beautiful temptress named Georgia Brown (Lena Horne).   Little Joe is making an earnest change for the better, but a misunderstanding over Georgia has Petunia send Little Joe packing.

Now at the Paradise Club, Domino Johnson (John W. Sublett, better known as Bubbles), he who shot Little Joe, is out of prison, looking to get back with sweet old Georgia Brown.  Little Joe is now a wealthy man, squiring his newest flame around town.  It therefore comes as a surprise to see Petunia at the club, all glammed-out herself and apparently having gone over to the Dark Side herself.  However, we all know it's a ruse to win her man back, but tragedy strikes: while Little Joe is defending her, Domino shoots Petunia by mistake.  While rushing to her, Domino strikes again, this time at Little Joe.

It's time for the Reckoning.  It's at first evident that Little Joe is still a bit short in the ledger of the Lord, but Petunia won't leave Little Joe.  Her love truly redeems her man, and we end with our two lovers Taking A Chance on Love.

While watching Cabin in the Sky, I confess that I soon gave no thought to the fact that the cast was all black.  What I saw was a sly, charming and delightful musical that was respectful of African-Americans but that is also universal in its tale of redemption through love.  It shows the truth that when you've got a great story and a host of talented performers, color is unimportant (as it should have been back then, but I digress).

It is incredible to think that Cabin in the Sky is Vincente Minnelli's first feature film.  He handles the musical numbers beautifully, be they lavish such as the dance number with Duke Ellington and His Orchestra, or a tender number like in the title number.  In terms of acting when there isn't singing, Minnelli likewise balanced the story's comic and dramatic number.  More important, there wasn't a time or scene in Cabin in the Sky where the characters were demeaning or something to be ashamed of.

The only part that might be questionable now is when Lucifer, Jr. is in his Department of Ideas, and one of his minions is a sleepy, slow-witted man.  However, on the whole, that is a minor point; we have a great movie where the songs and performances all work so well.

Of course, one would ask why Petunia would want to be with Little Joe, but then such is the nature of love.  You can't argue with her love if it inspires the beautiful standard Happiness Is A Thing Called Joe.  One really can't go wrong when the music (adapted from the stage musical) comes from Harold Arlen.  Like all good musicals, we get a chance for performers to showcase some great songs, such as Taking A Chance on Love, both of which features Ethel Waters' crystal-clear voice and great charm.

We even get great moments such as the brilliant Louis Armstrong in a cameo as one of Lucifer, Jr.'s minions in the Ideas Department.  We also can't argue with a great musical number from the immortal genius Duke Ellington at the Paradise Club.  One can argue Ellington and His Orchestra has nothing to do with the story, but it's Duke Ellington, and I ain't about to argue against him.

There is great wit in the film.  One of my favorite lines in Cabin in the Sky is when Lucius, Jr. complains he has a poor Ideas Department.  "All the A Boys is over there in Europe", a sly nod to true Servants of Satan Hitler and Mussolini.

Although Horne has a surprisingly small part in Cabin in the Film, she is a delightfully vamping it up as the Sweet Georgia Brown.  She is having a wonderful time, expressing a wicked sense of humor as the temptress.  She has some showstopping numbers that showcase her extraordinary talent and glamour, such as Honey in the Honeycomb.

Waters is the heart and soul (no pun intended) as the God and Little Joe-loving Petunia, and her performance is one of such tenderness and sincerity that you ache with her as she struggles to set her man on the narrow path.  However, while she is not really able to give Horne a run for her money in the glamour department, when she does her own rendition of Honey in the Honeycomb, she comes out just as talented a singer as Horne.

We also give credit to Anderson as the befuddled Little Joe and also Ingram as Lucifer, Jr., bringing a comic turn in the film.

Cabin in the Sky shows that a film need not focus on race to be a sweet, charming, and well-crafted musical.  It's a story that all races will enjoy, and Cabin in the Sky will bring happiness to Joe and everyone else. 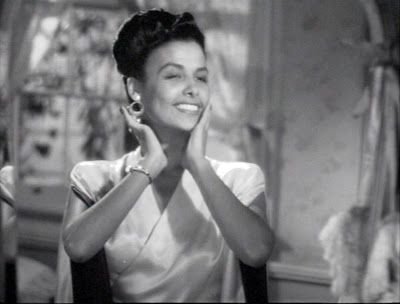 Truth be told, if the Devil wanted to tempt any man, he couldn't make a finer choice than Lena Horne.