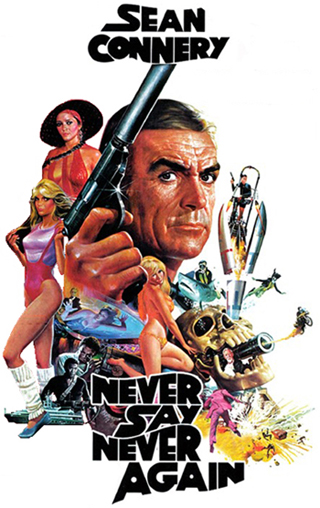 Sounds of A Distant Thunderball...

Whether it was meant to come out after the official Bond film Octopussy I have no way of knowing.  However, NSNA has one advantage: after sixteen years and swearing he would "never again" play James Bond after completing Diamonds Are Forever, Sean Connery was shown that one should Never Say Never Again.  This can be the only time I would agree with the maxim, "You've seen one Bond film, you've seen them all", because it is bascially (though not strictly) a remake of Thunderball, so if you've seen that one you've basically getting the same story.  I didn't think Thunderball was the best Bond film, but not the worst.  However, seeing its remake, I might have to revist that idea.

Unlike all other Bond stories, we start out straight into the title song, where 007 botches a training exercise.  M (Edward Fox) is irritated by Bond and all the 00s, thinking Bond's past it.  With that, it's literally off to a spa for a strict regiment of exercise and diet, even meditation.

Unbeknown to MI6, SPECTRE is planning a nefarious scheme.  SPECTER head Blofeld (Max Von Sydow) is planning a major operation codenamed The Tears of Allah, where his Number One, Maximillian Largo (Klaus Maria Brandauer) will use Jack Petachi (Gavan O'Herlihy) an American Air Force officer whom they've turned into a heroin addict, to steal nuclear warheads.  They will do this by reshaping his eye to match that of the President.   This will allow Petachi to gain access to the nuclear warheads.

Owing to the overenthusiam of Captain Petachi's handler Number 12, Fatima Blush (Barbara Carrera) in teaching her subject to obey, it draws Bond's attention.  That in turns leads to an attack on Bond.  In typical bureaucratic thinking, the fact that Bond was nearly killed isn't as important as that the spa suffered heavy damage as a result, damages the government will have to pay for.

SPECTRE's plan works beautifully, but it does cost the Captain his life.  With the weapons now in their possession, SPECTER now blackmails the world: pay up to 25% of the various countries oil purchases or the weapons are used.  Extremely reluctantly, M is forced to reactivate the 00s.  007 now hits up Algernon, aka Q (Alce McGowan), who is genuinely happy to see him, hoping 007 will be bringing that "gratuitous sex and violence" back to MI6.

Largo, while involved in the planning of this scheme, has at least one distraction: a dancer named Domino (Kim Basinger).  Largo's girlfriend (she seems too naive to be called his mistress) also happens to be Captain Petachi's sister.  Bond's investigation sends him to Largo's home in the Bahamas.  His British contact is Nigel Small-Fawcett (Rowan Atkinson) , and Fatima is also in Nassau.  A short tryst later, Bond finds out how dangerous she can be.

Moving on to Monaco, Bond meets with his old friend Felix Leiter (Bernie Casey, becoming the first black Leiter in any Bond film and beating Jeffrey Wright to that honor by a good twenty-three years).  Now they investigate Largo's ship, the Flying Saucer, and make the connection between Domino and her brother Captain Jack.  It doesn't take Bond long to get to know Domino, with Fatima in hot pursuit of both (literally and figuratively).

By this time, Fatima's pleasure at killing might have unhinged her, given how she becomes fixated on being put down as James Bond's greatest lover in his memoirs.  Bond, however, puts her down...literally.  Bond sneaks aboard the Flying Saucer, but in typical Bond film style, Largo is quite welcoming, allowing him use of his ship and free access while on board.  Bond manages to send a message both literally and metaphorically: literally to MI6 about their location, metaphorically to Largo that he can get to Domino too.

For her act of treachery against the wildly jealous Largo, Domino is auctioned by and to the Arabs (good to see no stereotypes were used), with Bond rescuing her.  The first bomb has been disarmed, but now they have only five hours to find the second bomb.  Will he?

I think that Never Say Never Again holds up remarkably well until the final act, when it all becomes too comic to be taken seriously.  Once Fatima literally blows up, the film becomes unsalvageable.  Almost all that follows this particularly bad/silly moment brings NSNA crashing down to where the filim is more spoof than serious, as if they were going for the original Casino Royale rather than the official version from 2006.

Some of the characters and motivations aren't so much unclear as underdeveloped.  How exactly did Domino get to Bond at the end?  How was it that MI6 or the CIA did not make the connection between Largo's mistress and the USAF Captain? Was SPECTER and Blofeld even necessary to the story?

I think director Irvin Kueshner did a good job with what he had, but it wasn't all that good to being with, with some terrible mistakes.

One salutes him for making Carrera's Fatima into a fun character, one who delights in killing and screwing (even though after failing and failing once over one wonders why they kept going to her to try to kill 007).  Basinger is a little hesitant as Domino, but we can forgive that given that Domino as a character is a little hesitant and fearful.  It's unfortunate that the script didn't give her much motivation to love Largo or how she never appears to question why her brother never communicated with her.

Brandauer has a good performance in the role of the main villain but by the end he appears to lose interest (which curiously, so did we).  Whenever Atkinson appears (which is only twice) we see he is putting in good humor where we're suppose to have it, but again, someone who isn't really necessary.  I never bought the comic stylings of Atkinson in NSNA, and when he can't make you laugh...  Fox actually did a good job as M, giving that stiff British upper lip to all the goings-on.

Now, as for Connery, it's clear he knows his character well.  It is good to see him back for one last turn as James Bond 007, and while we have plot points that explain why Bond is older, there really is no need for it.  He still looks fit and charming as the ultimate ladies man and professional agent.  He still can do it in NSNA, but the film couldn't keep up with him.

I think the opening sequence in Never Say Never Again shows the wisdom of all the other Bond films in having the song play against a montage rather than be part of the actual plot.  There's something a little odd in hearing a nice ballad about loving a player against scenes of killing in a remote jungle.  While the song is nice (Alan and Marilyn Bergman are good songwriters), the song itself is a little too soft, especially when put against the harshness of the scene the song is played against.

While Michael Legrand's score is not as bad as its reputation suggests, there were moments in it that should be taken to task for.  In particular is the beginning of the chase scene where Bond pursues Fatima.  It was a strange jazz melody that doesn't work against seeing a woman floating in a waterbed.  Even worse is that the jazz score is continued during what should be an exciting motorbike chase.  It just doesn't work.

Lorenzo Semple, Jr.'s screenplay certainly has its double entendres.  Just before going scuba diving with Fatima, James tells her, "When going down, one should always be relaxed".   However, there are things that today look strange, even comic.  For example, there's this exchange:

We have more bad moments; in the charity event Largo throws there is an arcade.  Today, with the PlayStations and Wiis, seeing a group of old video games looks oddly antique.  The playing of a game called Domination by Largo and Bond seems so bizarre and distracting, but in an odd way amusing.

Nothing more interesting than seeing two middle-aged men playing video games against each other.

As a side note to that, the special effects effects today look quaint, but one imagines they would have looked all right in 1983.

There are moments that should lend themselves to drama and tension but come across as comic.  I think it has to do with the good amount of dancing in NSNA.  Fatima enjoys shaking her stuff at any chance, but when James and Domino trip the light fantastic it almost look as if it were coming from a parody of a Bond movie rather than a sincere effort at one.

However, for me, what brought down Never Say Never Again in terms of being a serious effort at an actual James Bond film is when Bond and Domino escapes from the Middle Eastern palace.  That in an of itself is silly, but when they jump out of a tower and fall to the ocean whilst riding a horse, I just rolled my eyes and stopped caring, almost waiting for it to wrap up so I could go do other things, such as eat or read.

Next James Bond Film: A View to A Kill