This Means War: A Review 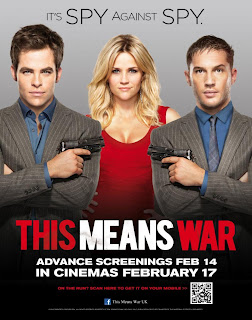 The Spies Who Screwed Me...

That wraps up This Means War in the plot department.  Whether that makes for a good film (let alone for a good time)

We have two CIA agents: FDR (Chris Pine) and Tuck (Tom Hardy), master spies/assassins/best friends.  FDR is the swinging bachelor type, while Tuck is more family-oriented, complete with son, Joe (John Paul Rottan).  They are working on a major case to take down some Germans, which despite their skills they manage to botch.

Into their lives enters Lauren (Reese Witherspoon), a product tester with a bad love life, so awful that even the Japanese sushi place she frequents knows it's "sushi for one".  Her only friend is Trish (Chelsea Handler), a brash-talking broad/lush who encourages Lauren to go for online dating.

Trish sets up an account for Lauren without her knowledge/approval, but she comes across a picture of Tuck, and who can resist Tom Hardy?  Despite hitting it off with Tuck, she meets FDR at the video store, where he becomes fascinated by her ability to resist his flirtations and beautiful blue eyes.  With that, he uses his spy skills/connections to get to know her.  Tuck and FDR quickly find out they are after the same woman, so they decide to continue pursuing Lauren to see who wins her heart.

Will she fall for Tuck's gentle charm or for FDR's swag?

Despite the rules they set up, they decide to use the vast resources of the government spy agency to investigate everything about one Lauren Scott so that Spy A can get the advantage over Spy B.

Kind of makes you wonder just how far the PATRIOT Act stretches, doesn't it?

Therefore, it becomes a game of one-upsmanship, with Tuck and FDR faking interests and knowledge of things that interest her in order to win her over.  Truth be told, that isn't much different from many relationships, but I digress.  Lauren, unsure about whom to dump, continues seeing both men (and I figure not telling one about the other), unaware of course that they know each other.

Finally, she appears to make a decision (based, in part, on how good FDR/Tuck are in bed), but as is the case in life, work gets in the way.  While the two fight it out in a restaurant, revealing all to Lauren, Henrich (Til Schwieger), the German they've been after, finds Lauren.  With that, a final chase to rescue her.  In the end, she chooses...

Well, here's the tricky thing.  She has one of three choices.  There's the official choice (FDR), there's Unofficial Choice #1 (Tuck), and Unofficial Choice #2 (neither).  Normally, I don't bother with alternate endings.  In fact, I see alternate endings as remarkably lazy and a bad sign, a signal saying that the screenwriters (in this case, Timothy Dowling and Simon Kinberg from the story by Dowling and Marcus Gautesen) had no idea where their own story should go.  However, I opted to see them because This Means War has only one of three resolutions possible.

To my mind, they chose the wrong ending, because I didn't know if FDR was really in love with Lauren or just interested in beating his best friend at something.  At least with Tuck, for most of the film, there appears to be a genuine interest in having a relationship in general and with Lauren in particular.  With FDR, about the only thing he offers are his small hands and beautiful blue eyes.

Truth be told, there is something sleazy in the scenario of This Means War.  It isn't just the idea of two men basically stalking a woman.  It isn't just the idea that these same two men are spending untold millions of our tax dollars to commit felonies and shred the Constitution with illegal wiretaps and surveillance of a private citizen for their own needs.  It isn't the fact that all of these people are lying to each other.  It isn't even the fact that Lauren is a bit of a slut, or at least tawdry in how she isn't much troubled about seeing two men simultaneously.

It is the fact that the two men resort to such low levels to get at this woman, sometimes forgetting whether it is to get her to like one or the other or just to beat the other guy into her pants.  For me, when FDR takes Lauren to meet his family was not too bad, but when Tuck actually uses his son to get Lauren, something about that struck me as disgusting.  The idea of using your child as a seduction tool is, at least in my own worldview, reprehensible.

I noticed that director McG did a rip-off (or perhaps 'homage') to GoodFellas, not only copying the same single-shot of FDR and Lauren going to a club but even the same conclusion of a table arriving just for them.  He was rather fond of single-shot takes, not just in that last scene but also when both Tuck and FDR (unbeknown to the other) break into Lauren's home while she's there to case the joint and plant bugs and hidden cameras (all the while she continues singing).

McG certainly has a certain panache in how he films the action sequences (the opening and closing ones are particularly interesting).  It's everything in the middle that we don't really care about because neither he or the writers care.  We have this subplot about this German that never fits into the story.  We don't know why they are following him, or what he is up to.  He just serves as an excuse to have a last-minute menace for our protagonists (and even in the late stage of This Means War he is irrelevant).

For most of the movie it's really about how these two best friends do anything, break all kinds of laws, to get one woman to choose one over the other.  If they'd been travel agents rather than spies for example, would that have made the scenario more amusing?  I actually think so, for it would have forced them to rely on something other than high-tech gadgetry to get at her.  It might have required them to use their thinking.

I can't say much in the terms of acting.  Pine handles the somewhat sleazy player aspect of FDR rather well, though not so well when called upon to rely on more emotional moments (a throwaway line about dead parents really isn't an excuse for bed-hopping).  Hardy looks like he just wants to have some kind of comedy on his resume, in between darker fare like Inception and The Dark Knight Rises.  He has charm and some looks to him, but he doesn't seem at ease trying to get laughs.  Hardy got the action part right, and even those moments with his son.  It's when he has to try to play at getting a step ahead of FDR where he falters.

I imagine he won't go for many comedies in the future.

Witherspoon is the one I feel sorriest for.  Lauren isn't so much dumb as she is almost bored and even slightly annoyed at having to choose these two hot guys.

Witherspoon really should stop making these kinds of romantic comedies that force her to do nothing more but pout.  Damnit, you're an Oscar winner, for a DRAMA no less.  Start going for better roles instead of films that just ask you to play cute.

Handler is unnecessary as the wisecracking drunk (how this is different from her Chelsea Lately persona I leave up to you), but I do wonder why Lauren would be friends with such a lush.

This Means War is dumb and forgettable.  The characters aren't people you really care for, the scenario surprisingly reprehensible, and moreover, really--you give Angela Bassett yet another role where she has nothing to do and make her disappear before half the film is over?

All I am saying, is give peace a chance...but not This Means War.