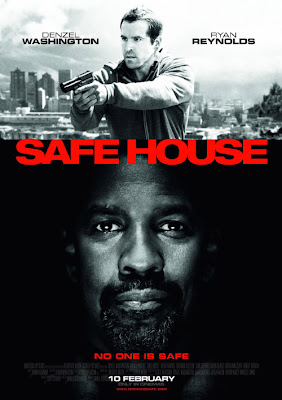 It is good to see that South Africa is now taking its place among the nations.  Now that the transition to full democracy has taken place we can see that this long-troubled nation can finally be the setting for lousy action films just like any other.  Safe House may not be the first major film to use South Africa as a location, and while it does show off the beauty of the land, as a film, it doesn't appear to have any interest in doing either anything new or even interesting with the story it tells.

Matt Weston (Ryan Reynolds) is a frustrated CIA agent.  He wants to advance by being put in the field, particularly the Paris branch so as to have closer ties to his girlfriend Ana (Nora Arnezeder).  For now, he is close to her since she also works in Cape Town, S.A., but she doesn't know he's CIA.  As it stands, Weston is just waiting things out as the lone guardian of a CIA safe house, whiling away the hours waiting for anyone captured by the agency to be housed there.

As it turns out, something unexpected happens.  Tobin Frost (Denzel Washington), one of the most notorious agents to ever go rogue, conveniently walks into the American consulate after escaping some assassins.  While in Washington, CIA officers Harlan Whitford (Sam Sheperd), Catherine Linklater (Vera Farmiga), and David Barlow (Brendan Gleeson), the last who happens to be Weston's mentor, are happy Frost has turned up, only Linklater seems to question why after being on the run for so many years Frost just walked into the consulate knowing he would be immediately turned over.

Weston tries to handle the capture of Frost with aplomb, knowing a successful handling of the situation could be a feather in his cap.  However, in short order a group of assassins storm the safe house.  Only Weston and Frost escape.  Frost, however, has a few tricks up his own sleeve.  See, he was the best trainer in psychological warfare, making him a master manipulator.

What are the odds Frost will try his act on rookie Weston?

Weston now wants to keep Frost in his custody, but shockingly Frost outsmarts him.  While Whitford and Company tell him to let them take it from here, Weston decides it's better than he bring Frost in.  Eventually, he does, but by now we know there is a mole within the CIA, one who will be brought down if the information Frost has is ever exposed.

One guess as to who the mole is...

As I finished watching Safe House, I thought that it's not so much that one can't follow the plot than it is that one doesn't care to.   Everything about Daniel Guggenheim's script is so by-the-numbers one has worked everything out long before everyone else, which I don't think is a good sign.

That is the biggest flaw within Safe House.  Everything is predictable.  You already know who the traitor is.  You already can guess that Tobin Frost is not really whom he first appears to be.  You know the rookie is going to get thrown into a situation he is hardly prepared for. You know when they get to the second safe house things are going to turn out badly.

You know everything.  Since you know everything, you don't have to even be paying attention to the film because you know everything that will happen.  A little bit of originality would have saved Safe House.  How about this: make Tobin Frost into an actually evil guy, a traitor who did sell secrets and who managed to get captured by the rookie given his first assignment in Cape Town.

See, by just tweaking the premise, we have an entirely new movie, a cat-and-mouse chase where a more and more desperate Frost comes across the surprising intelligence of the untested Weston, a man who is burning with desire to test out his new theories.

Director Daniel Espinosa made two crucial mistakes with Safe House.  The first is the incessant trend of aping so many Bourne knockoffs by having the shaky-cam going at full blast.  The shaky-cam effect has long ago worn thin and is one of the banes of my viewing experience.  Second, it is by giving genuine talents like Shepard and Farmiga nothing to do except talk in semi-serious tones.

As I kept watching, I kept wondering why Reynolds looked like was always on the verge of tears.  I'm one of the people who thinks he has genuine acting talent when given a chance, but here his Matt Weston was both such a wimp and a moron that you sometimes have to laugh at him.

One particularly funny scene is when Weston and Frost are escaping from the besieged safe house.  Weston has Frost in handcuffs, and as they emerge into the sunlight Weston hurriedly hails a taxi, telling a slightly amused Frost, "Wait, wait, don't move".  The idea that Frost, even in handcuffs, was going to patiently stand on the sidewalk while this kid goes looking for a cab is borderline idiotic.

Washington to his credit does the best he can with the material, trying to make Frost into a mysterious character one is never quite sure which side he really is on.  How he escaped from the idiot Weston at the Green Point/Cape Town Stadium is a highlight (as is the following chase for Frost) both for Washington and Safe House itself.  If nothing else, it shows the intelligence in the script of having Weston speak Afrikaans (giving him a leg up to Frost's American English).

However, those few nods to reality don't make up for the fact that Safe House is worse than a bad film.  It's a boring film, which an action film cannot afford to be.  That being said, it's best to leave Safe House abandoned.