Maud Adams is unique in the chronicles of Bond Girls: she is the ONLY woman to be a Bond Girl twice, first in The Man With the Golden Gun, and second as the title character in Octopussy (perhaps the most provocative name since Pussy Galore).   Octopussy is not held in high regard by fans or critics, and they have several points that I should concede.  However, Octopussy is one of my favorite Bond films.  Note I said 'favorite', not 'best'.

We begin in an unnamed Latin American country (though it's strongly suggested it is Cuba), where there's a horse show.  British MI6 Agent James Bond 007 (Roger Moore) attempts sabotage, but is able to make a daring escape with the help of a local beauty and a small plane perhaps too cleverly disguised.  This flows us into All Time High, the opening song (the only instance as of today where the title of the movie did not appear in either the title or the lyrics of the song).

Now, on to the main plot.  Another MI6 agent, 009, escapes East Berlin but is killed before he can say anything.  He does die, however, with a Fabergé egg in his hands, and in the British ambassador's home.  Oh, and did I mention he was dressed as a clown?  Who killed him, and why?  Further, why did he have that Czarist Easter Egg in his possession?  That's what 007 is meant to find out.

The egg is a forgery, but the real one is going to be auctioned.  Meanwhile, in Moscow the military is in favor of nuclear disarmament with one loud exception: General Orlov (Steven Berkoff), who is calling for an invasion of West Germany.  The bad general is, we find, behind the forgeries and smuggling of the Russian treasures.  Also involved is Kamal Khan (Louis Jourdan), a shady figure of questionable wealth.

The investigation leads to India, where Khan resides in exile. We get to know a beautiful woman, Magda (Kristina Wayborn), who is also involved in this business.  Once Bond starts getting involved, it draws the ire of both Kamal Khan and his henchman Gobinda (Kabir Bedi).  There to help him is Indian contact Vijay (Vijay Amritraj).  Soon Bond learns that Magda is the right-hand woman of the mysterious Octopussy (Adams), the proprietress of an island filled with a bevy of beauties, an island restricted to women only.

Bond soon discovers Khan's connection to General Orlov.  He also finds that this Octopussy is somehow involved.  Knowing that there's sexual discrimination going on in this private island, we soon meet Octopussy herself (Adams).  She is the cult-like leader of these Amazons, the owner of Octopussy's Circus, and a woman whose past is tied to his.  She freely admits to being involved in jewelry smuggling but that's all she's involved in.

Bond discovers that apart from smuggling, Octopussy has divested into legitimate businesses, including circuses.  There is to be a performance of Octopussy's Circus in  East Berlin, and it is here that Bond makes a shocking discovery.  Using Octopussy's smuggling expertise, Orlov and Khan smuggle a nuclear bomb straight into the American Air Force base in West Germany, which they plan to explode while Octopussy's Circus is performing there.  This is Orlov's plan to kill thousands of people without getting his hands dirty and to cause greater calls for nuclear disarmament in the West (and thus making the West more vulnerable to his invading forces).  Kamal Khan shall be paid with the jewels of the Soviet treasury once the war on the West is won. Octopussy, who knows nothing of this plan, continues to believe she is merely smuggling Romanov treasures, unaware the jewels have been switched out.

Bond does, after jumping many hoops (no pun intended), does save the day, and then it is off to India for one last confrontation, but with Octopussy and her troupe now on his side after she discovers Kamal's treachery.

I think Octopussy is poorly regarded because so much of the film is based on rather outrageous/outlandish moments and incidents that make things look too comic. Ther are sadly, too many moments where laughs are sacrificed for plot.  Most of them involve chase/action scenes.  For example, what could have been a thrilling chase across the streets of Delhi gets too many goofy touches (such as Vijay beating the thugs off with his tennis racket).  Similarly, Bond's escape from Khan's palace involves a literal man-hunt (complete with elephants), Bond ordering a tiger to 'sit', doing a Tarzan yell as he swings through the vines, and quipping once he manages to get aboard a tourist rivership that he's with "the economy tour".

In fact, it isn't until later on when the Octopussy Girls raid Kamal's palace or a chase aboard Octopussy's train that we see that action sequences could be taken seriously if director John Glen chose to.  Those moments were actually quite good, even exciting and well-paced.  It's some of the earlier, more goofy ones that push Octopussy towards the ridiculous. 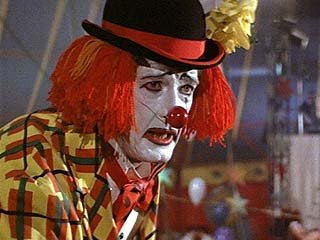 This propensity towards the ridiculous reaches its nadir when James Bond 007, super-spy/ladies man, is forced to dress like a clown to enter the circus on the American base (after already having been disguised at one point as a gorilla).  Granted, the film takes great pains to set up why James Bond has to take on such a silly disguise, but it is still rather bizarre to have such a serious situation as having a nuclear device be dismantled by someone dressed as Bozo.

It brings to mind of all things, Holiday Inn.  This is a mostly delightful musical where the songs are connected to American holidays.  The most controversial number is the Abraham sequence, which involves Bing Crosby and Marjorie Reynolds in blackface (and as strange as that sounds, that description is actually tame given what is actually on the screen).  The movie went through great pains to make Croby's blackface logical, but it still is disturbing to watch in the very least.  Similarly, Octopussy makes it extremely clear as to why Bond had to don such an outlandish disguise.

However, as logical as it all is, it still runs the high risk of making Bond a figure of ridicule more than anything else.

On a slightly different track, perhaps part of the dislike towards Octopussy might be that she comes across as almost a Batman-like villainness, one from the television series, not the film series.  Here's Octopussy with her horde of femme fatales, involved in criminal activities.  However, very few Bond films have featured a female antagonist to match wits with 007.  Bond Girls tend to be either the male villain's mistress or henchwoman, and every so often Bond's ally, but rarely is a Bond Girl ever at the center of the plot.  Octopussy is, and while she isn't the main antagonist (Kamal Khan and to a lesser degree Orlov having that role), it is I think a step in the right direction.

However, it would be good if Bond faced off against a female criminal mastermind, one who might not be so quickly won over by his sexual prowess.

There is ONE point of comedy that does work, and that's from all of people, gadget expert Q (Desmond Llewellyn).  Q comes down on a hot-air balloon just in time to rescue Magda and the other girls in the Octopussy Cult.  They thank him by showering him with kisses.  At first he protests that there's no time for that, then quickly adds after getting a gander at Magda, "Later, perhaps".

It may be the ONLY time Q ever got in on the action...figuratively and literally.

However, I think that those who dislike, even loath Octopussy may be missing the forest for the trees.  Within the film we have some remarkably good moments and sly winks to the audience.  We have a strong performance from Adams as the title character, one who mixes her beauty with her cleverness as a smuggler.  Now I will concede that at times she becomes lost in the mayhem, and that times when she expresses wistfulness it comes off as more lost.  However, Adams if nothing else commands the screen when she is on.

Jourdan is having a great deal of fun being the bad guy, rolling his various pronouncements with aplomb.  He is more in the Drax mode of villain from Moonraker than in the Kristatos mode from For Your Eyes Only, one who a megalomaniac who uses language with great pleasure.  One can't really dislike a villain who speaks lines such as, "Mr. Bond, you have a nasty habit of surviving".  Perhaps Berkoff is thought of as being hammy, but I disagree.  I think he was menacing as the power-mad warmonger Orlov who has no problem potentially killing thousands to strike at his enemy.

Moving on to the title theme, All Time High has the positive of having lyrics written by Tim Rice.  On the whole, All Time High is pleasant, pretty even, but I don't think one of those songs that one instantly ties to James Bond, certainly not like Goldfinger or Nobody Does It Better.

We also have some beautiful cinematography of India courtesy of Alan Hume, and the visuals are quite lovely to look at, which is always a plus.

Screenwriters George McDonald Fraser, Richard Maibaum, and Michael Wilson (adapting two Ian Fleming stories, Octopussy and Property of A Lady) might have done well in cutting down on some of the more outlandish elements in Octopussy, but on the whole the story flowed quite well.  As a digression, they might have done better to have called the film Property of A Lady, which at the very least might have led to a title song that could have used the title in the song.  It's hard to come up with lyrics that could use the word Octopussy.  If Tim Rice couldn't do it, what makes anyone else think they can do better?

Octopussy may be more on the silly side in the James Bond canon, but it does what a good Bond film does: give us beautiful women, exotic locales, a grandiose villain, and some good action scenes.  By no means perfect, Octopussy is a film that can reach out and take you in its tentacles if you allow yourself to just get into its fantasy.

Next Official James Bond Film: A View To A Kill