Patang (The Kite): A Review 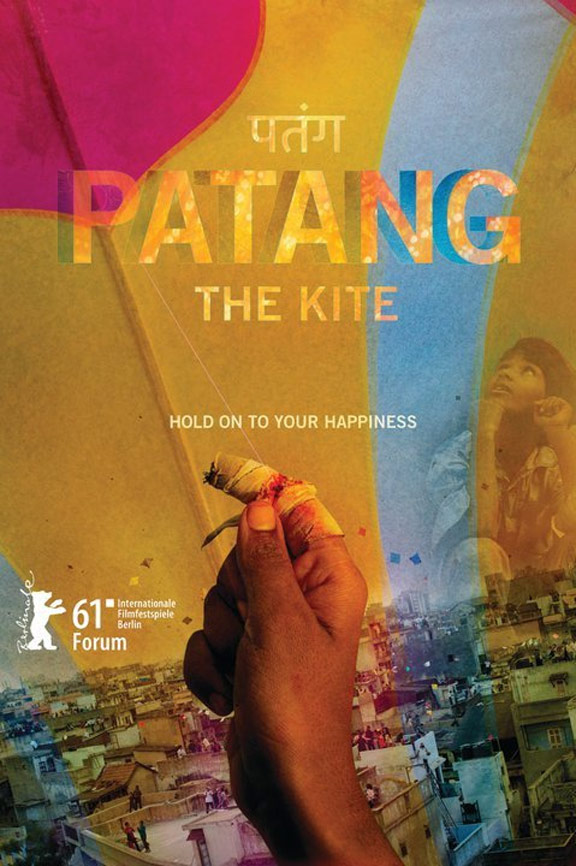 Patang (The Kite) is not to be confused with a Bollywood film in any sense.  It isn't, however, reminiscent of Slumdog Millionaire, perhaps the other idea of India as a place of desperate poverty and unhappiness (although Slumdog does end, like most Bollywood films, with a big musical number).   Instead, Patang is a remarkably universal story, one of the importance of home, of family, and how things within in are always in flux.

Patang takes course over three days: January 13, 14, and 15th, in Ahmedabad, India.  It is the day before, the day of, and at least the morning after Uttarayam, the Kite Festival in the city.  Janesh (Mukkund Shulka) is a succesful business man from Delhi who has returned to his hometown to show off the festival to his daughter, Priya (Sudgandha Garb).  His visit is a surprise to his mother, his sister Sudha (Seema Biswas) and his nephew Chakku (Nawazuddin Siddiqui).  Chakku in particular is not thrilled to see his wealthy Delhi uncle come, but his mother and grandmother are.

Chakku has a friendship with local urchin Hamid (Hamid Shaikh), who has a job delivering kites.  Chakku is a ne'er do well, having a touch of a job as a singer but not being successful at it, and certainly not in the way Uncle Jaresh is.  Within the course of Patang, Janesh finds that things in the old neighborhood have pretty much stayed the same (though he's not happy about it), and is not happy that his daughter is wandering around on her own.  If he knew she was beginning a very brief fling with business man Bobby (Aakash Maherya), even though it is at best an innocent flirtation with one or two kisses.

However, the crisis is that Janesh has bought a big condo for his mother and sister in Delhi (without of course telling them).  He thinks they will be thrilled, but to his surprise, Sudha and Bo have no desire to leave:  this is their home, it has been their home, and it will continue to be their home.  Chakku, for his part, blames Janesh for his father's death from drinking.  Patang ends with Janesh leaving Ahmedabad, slightly injured physically and emotionally, with his family still there, still standing but issues still unresolved, and Hamid, slightly injured but still there.

I noticed that while writing that last part, I kept writing "still there", and I think that is true of the message of Patang: the people still are there, still make up part of the community.  This is a remarkably simple story, but it is handled by writer/director Prashant Bhargava so well because he never loses focus (no pun intended) on the fact that the story, in particular the dynamics of the family, is at the heart of Patang.

What makes Patang work is that we get just enough of the family structure to allow us to understand what kind of people they are.  We know that Janesh is successful, so we can figure out that when he comes to visit it isn't to lord it over the rest of his family but to help them with his fortune.  We can see Janesh is overprotective of his daughter, and also that Priya is both quietly rebelling by being a girl and finding the joy of early but fleeting love.

Patang at heart may be set in India, but it really is a universal story because this story is so relate-able to all families.  The situation within the story is one that can be seen in America, in Brazil, in South Africa, in Japan, in any country because all families have tensions, have black (or at least grey) sheep, but that do have love in the end.

Bhargava was wise in making Patang have an almost documentary-like feel with little in the way of music (although it does have a nice score) and by drawing performances out of all his cast (to where it was hard to tell which were the professionals and which were the 'regular' people playing themselves).

There were a few things I didn't get.  I didn't understand what exactly the relationship between Chukka and Hamid were.  Why had Chukka, a guy more interested in drink (like his father) and gambling take on this street urchin?  A fondness for him, perhaps?  I speculated whether Hamid might be Chukka's illegitimate child (given that Chukka's mother, like all mothers, yearns for a grandchild).  A story should not allow for this kind of speculation, even in one as small as Patang.  The crisis involving Hamid at the end likewise might have been a play to get us emotionally, and I didn't think it was necessary.

However, these are minor issues.  Patang is a beautifully made film with a small story that is both intimate and universal, with quiet performances and a glimpse into a world that is foreign and exotic to our Western eyes but which is also so familiar to anyone with family.