Jeff, Who Lives at Home: A Review 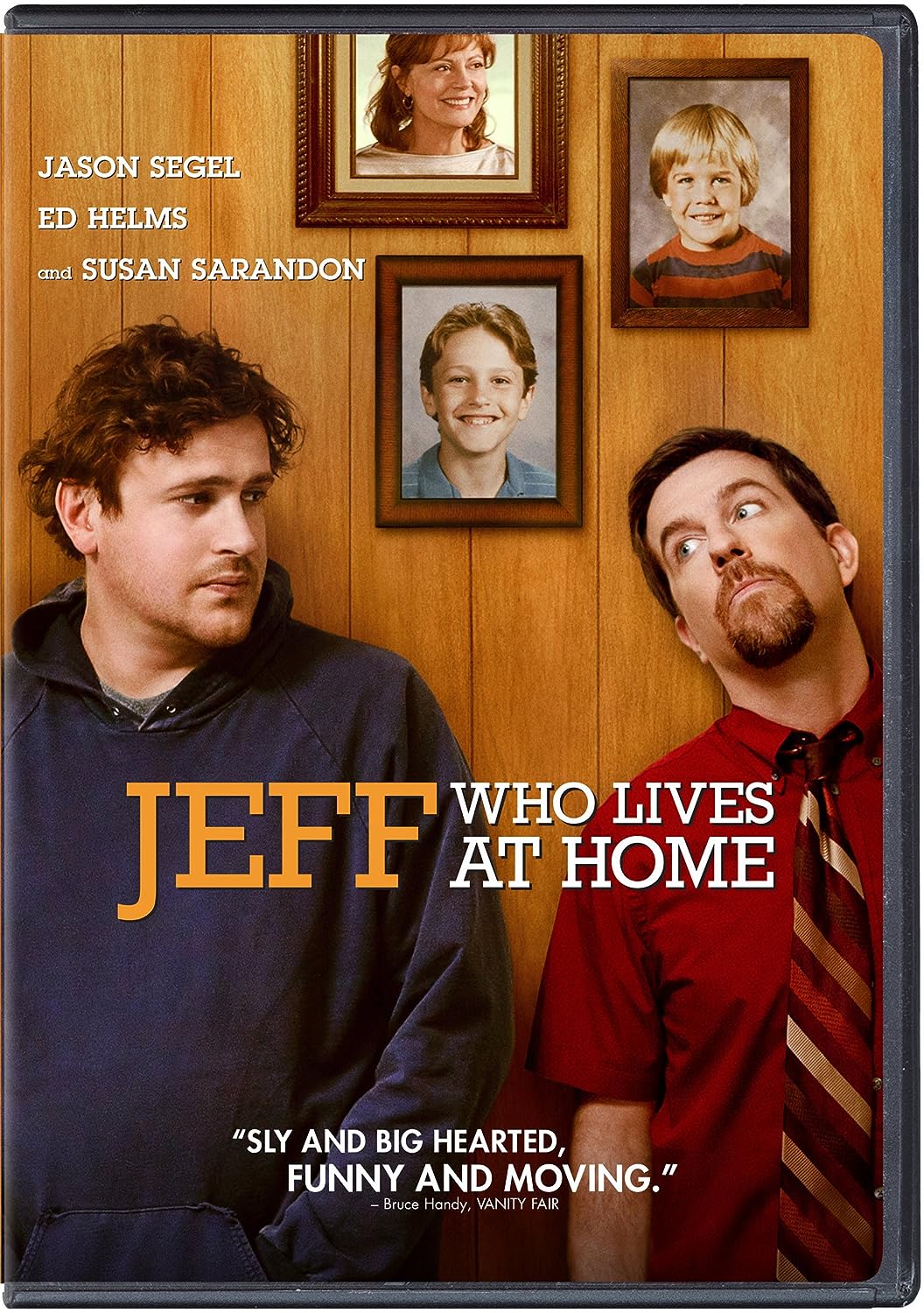 JEFF, WHO LIVES AT HOME

I cannot vouch for the genius of the Duplass Brothers, who are starting to make a name for themselves in the indie film scene are starting to segway into the mainstream.  However, judging by Jeff, Who Lives At Home, I will go out on a limb and say that the Duplasses (Duplassi?) will be an acquired taste.

Jeff (Jason Segel) is a 30-year-old slacker/pothead who lives in his mother Sharon's (Susan Sarandon) basement.  He has no job and no real prospects, but he does have one thing: a firm belief that all things are connected.  Jeff is a firm believer in signs as well as the movie Signs (which I alas, have not seen).  He receives on this ordinary day two phone calls: one from his mother giving him a very simple assignment (go buy some glue to fix something) and two, a seemingly random call for someone asking for a 'Kevin'.

Jeff is convinced that this is not a mere wrong number.  Instead, it is a sign that he must find this Kevin and gather whatever wisdom he is meant to or accomplish whatever mission the Force has given him.  Thus he begins to travel through Baton Rouge, Louisiana to find the mysterious 'Kevin'.

Meanwhile, Jeff's older brother Pat (Ed Helms) is having problems of his own.  His wife Linda (Judy Greer) and he are having difficulties of all sorts, primarily financial.  Despite having no home and no children (and living in a dump), Pat is genuinely puzzled why Linda is upset about him buying a Porsche without so much as consulting with her, let alone telling her until after the fact.

This is fortuitous since Sharon called Pat to get Jeff to buy what he was asked to.  Pat isn't too thrilled with having to be near his slacker/pothead/mystic brother, but he does as he's told.  Pat, convinced that the Porsche gives him some form of super-driving power, ends up crashing it.  Near the crash, Jeff spots his sister-in-law in a car with another man.  Now the chase commences.

Sharon, meanwhile, keeps getting strange messages from a secret admirer.

Pat becomes more obsessed with finding out who this guy is and what his intentions are, while Jeff (who reluctantly comes along to help), keeps finding signs to continue his Kevin hunt, this time in the form of a truck for "Kevin's Kandies".

Curiosly enough (or is it?) said truck leads Jeff to where Pat is: a motel.  The brothers find Linda with this mystery man (although there is nothing sexual going on).  Linda, having finally reached  her breaking point, tells Pat she wants a divorce and is leaving him.

Sharon eventually finds out who her secret admirer is (suffice it to say it involves her considering the alternatives, so to speak).  A fortuitous fire alarm allows our Thelma & Louise to go to N'awleans for some good times.

Jeff convinces Pat to fight for his wife, which means going after her...one guess where she's headed.  There is a major roadblock towards the Big Easy, but all our characters meet and we find that Pat and Jeff do love each other, and that the man Jeff rescued from a sinking car is...

Well, you'd have to be pretty stupid to not know.

This is what I can say with certainty about Jeff, Who Lives at Home: the only real fun I had while watching this remarkably predictable and somewhat insulting movie was in how I kept my notes.
For example, I started out with "Jeff, who loves Signs."  Then it was, "Pat, who is irresponsible," "Duplass, who like to move camera a lot," "Jeff, who's obsessed with Kevin," and so on.   It was almost becoming a game as to how long I could keep up that style of note-taking, and I managed to do it until the very end with a combo: "Me, who won't be happy if Dad was Kevin" and "Me, who was right".

Jay and Mark Duplass (who co-wrote and co-directed JWLAH), I figure amused themselves thinking that either they were being clever in how they structured their story or in how people wouldn't notice how shockingly predictable it all was (WHO here didn't think there really would be a Kevin in all this?).  I think this is where we have a big problem with JWLAH.

In any film, the characters should have some sort of evolution to their personality or have undergone some change.  In Casablanca, Rick abandons his cynicism to embrace loves of woman and cause.  In Citizen Kane, we see Charles Foster Kane grow from idealist to reactionary, from bon vivant to bitter recluse. The King's Speech featured a frightened man rising above his fears to lead his nation in an epic struggle for its very survival.

Jeff, Who Lives At Home, conversely, doesn't have a real change in our title character.  Instead, he is there to impart his wisdom to his brother (a non-believer).  The fact the film ends with him actually repairing what he was asked to repair I suppose hints that, now that his views have been validated, he will finally take on some responsibility, but a case could be made that it will have the opposite effect.

The Duplasses create a story that, if not for the mystical connection, would be laughed off the screen as far-fetched to where it's almost insulting.  Too many coincidences and things happening at just the right time...it's a tired and predictable device to get away with moving a story the way one wants it to.

Sadly for Segel, this is the second 2012 film of his that I've hated, and that's a shame because I think Segel has a good career ahead of him.  He did a good job as Jeff to where he is almost believable as a man who senses things are interconnected.  If it weren't for the fact that Jeff is remarkably annoying...

Pat is a smug, self-righteous character who has a solid belief in his own superiority both morally and intellectually despite all proof to the contrary (kind of the way liberals see Sarah Palin).  In short, it's an Ed Helms-type, so who better to play an Ed Helms-type than Ed Helms?  Pat is remarkably selfish and clueless about the type of person he is and because of that one really doesn't want him succeeding (in particular in saving a marriage to a genuinely nice and intelligent girl like Linda).  Still, while Greer was the only real bright spot in JWLAH, I did wonder why she simply could not explain to her boorish brain-dead husband why buying a Porsche without her consent or consultation was a really bad idea.

Sarandon's subplot appeared as if it came from another movie altogether, and just there to pad the relatively short 82-minute running time.

If nothing else, the Duplasses obsession with short and quick zooms in and out with the camera went beyond annoying to distracting.  I wondered if they were still learning how to operate the camera.  Was that done to make the story more cutesy and whimsical I wonder?  Didn't work if it did.

Jeff, Who Lives At Home is a movie that appears to have been made by artsy film students working on their school project.   It's pretty predictable and rote with not much to recommend it.

I hope no one is at home.