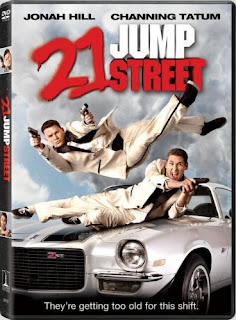 I make no secret of the fact that I have never actually seen a complete episode of 21 Jump Street.  I've seen parts of it, but somehow I managed to skip this iconic television series.  I don't know if the story of youthful-looking undercover cops would have appealed to me then, let alone now.  This does make it a bit hard to decide whether the film version of 21 Jump Street was more spoof or mere basis for a comedy.  I think it's a little bit of both.  To its credit 21 Jump Street is fully aware of itself and thus not take itself seriously.  To its detriment it doesn't have as many funny moments as I have been led to believe.

It is 2005, and high schoolers Schmidt (Jonah Hill) and Jenko (Channing Tatum) are nowhere near friends.  Jenko the jock has fun at Schmidt the schmuck's expense.  However, because of Schmidt's low status and Jenko's failing grades neither get that rite of passage among high schoolers: the Prom.

For the record, I too did not attend Prom.  HOWEVER, at my high school we had what is called Spring Fiesta which was more popular than the Prom, and I did go to Spring Fiesta (just so you know I was somewhere between Schmidt and Jenko).

Fast-forward seven years to 2012.  Both find themselves at the Police Academy where they find that they will not graduate because Schmidt lacks what Jenko has (physical strength) and Jenko lacks what Schmidt has (intelligence).  They decide to team up: one will get into shape, one will begin to use his brain.  They quickly manage to graduate and even become partners, maybe even friends.

Despite all this, both of them are basically morons and wimps who are unsurprisingly inept at their jobs (Schmidt can't shoot, Jenko is so dim he doesn't even know what Miranda rights are, let alone how to recite them).  With that, and I quote,


We're reviving a cancelled undercover police program from the '80s and revamping it for modern times.  You see, the guys in charge of this stuff lack creativity and are completely out of ideas, so all they do now is recycle shit from the past and expect us all not to notice.

With that, they are off to 21 Jump Street, where youthful-looking policemen will go undercover as high school students.  Captain Dickson (Ice Cube) thinks they are inept but gives them a major case: a powerful new drug has become popular in high school (causing a student's death) and the captain wants them to find the dealers and the suppliers.  To do so, Jenko and Schmidt (men obviously in their thirties) must pass themselves as both high school students and brothers.

As soon as they hit the school, it becomes clear that they are both out of touch with how schools work now.  Even worse, Jenko is so dim he inadvertently gets their covers mixed-up: now the former jock will try to pass himself as a science genius while the wimpy Schmidt will be the sports and drama star.  To Jenko's horror and Schmidt's joy, it is now cool to work hard, and to even be intelligent.  Even more surprising, the distributor of the designer drugs is an eco-friendly vegan, Eric (Dave Franco.  Digression: is it odd that another Franco brother happens to be cinematically connected with drugs, or is it mere coincidence).

In order to ingratiate themselves with Eric and his group, Jenko and Schmidt have to take the drug (which has them acting in bizarre manners but which doesn't kill them).  The cops, still clueless about how Millennials differ from Generation X, do some odd things, such as use a cell phone to TALK to people.  Apparently, they've never heard of Facebook either.

Soon, Schmidt and Jenko start making things too real: the former is falling for high school drama student Molly (Brie Larson) and Jenko is starting to bond with the science geeks (even enjoying giving their secret password, "Kneel Before Zod", and their version of a secret handshake, which involves recreating lightsaber fights).  They become so engrossed in basically reliving their high school years that Schmidt begins revelling too much in his role as the new kid, doing what Jenko used to do to him: laugh at him.

Eventually, our bumbling duo manage to find who the supplier is.  Without giving too much away, it isn't strictly Breaking Bad-like but it comes close.  This discovery comes at the worst time: despite a short break in their relationship Jenko and Schmidt get now what they didn't get before--They Get To Go Prom.  We even get a cameo from two that fans of the original show will recognize and the entire operation is busted wide open.

Again, not being a fan or follower of the original 21 Jump Street, I had to guess as to who some of the cameos were (I think there were three, one being obvious to even one with the most cursory knowledge of the series).  That might have been nice for those in the know, and oddly while most of the time a cameo from someone involved in the original production of a television adaptation or film remake adds very little, one has to give 21 Jump Street the movie credit for making the cameos actually relevant to the film.

I could make a strong case that both Hill and Tatum didn't venture far from their typical fare (Hill the constantly put-upon, slightly nervous character, Tatum as the dim himbo) but again to their credit they at least knew that they weren't going for anything other than almost spoofing their screen personas.  This is particularly true of Tatum, a man who will never play Shakespeare and appears to be the type who probably couldn't spell 'Shakespeare' if he tried.  Both had a great deal of fun mocking the stereotypes of the dumb jock and the nerd (although I wonder if looking like Slim Shady in 2005 really made you a nerd.  I was Captain of the Academic Decathlon team in high school, but I never had braces.  Yet I digress).

21 Jump Street really is less about the television show but more about two people who haven't quite grown up yet find that they are now able to experience life from the other side of their formative years.  Now with the roles reversed, the jock finds that nerds can be fun (especially when they use science to blow things up) and the clumsy nerd can see that mocking someone is not fun if it means hurting people.

In short, the film enjoys playing with conventions: the jock who finds he can be smart, the wimp who finds his courage, even the drug dealer with a social conscious.  Dave Franco should now emerge from his brother James' shadow with a wonderful comic turn as the environmentally-aware vegan drug dealer (what IS IT about the Francos and drug dealing?), a guy who is never menacing but despite being a major drug operator still a kid at heart (he is scared out of his mind to be surrounded by guns and as he's arrested he cries out almost child-like about how he really should be going to Berkeley).

Another good performance came from Larson's Molly, who adds a genuine heart of a teenager who could fall for Schmidt's alter ego (so much that we can basically paper over the fact that there is a romance suggested between an eighteen-year-old and someone at least twenty five years old).

I won't fault Mr. Cube (IF that is his real name) for playing a stereotype because Michael Bacall's screenplay (from a story by Bacall and Hill) writes it as if Captain Dickson is fully aware that he is basically the stereotype of the loud and belligerent police captain (who also happens to be black).

However, I do note that Bacall and Hill appear to have a rather strange obsession with penises and oral sex.  The characters went beyond calling each other 'dicks' to suggest or give the impression that they gave each other blow jobs and it culminates with a penis getting shot.  For me, this was remarkably juvenile (especially from men in their thirties).

However, I do acknowledge that co-directors Phil Lord and Chris Miller had some very funny moments in 21 Jump Street.  The car chase which starts with a driver's ed car and ends with a luxury auto was funny as was when Jenko and Schmidt finally face off about how they have taken their roles too seriously during a high school production of Peter Pan.

There were a few things I found hard to believe in 21 Jump Street (the speed at which Jenko and Schmidt become friends, how dumb both of them were, the odd fixation on penises) but given that the film at least was smart enough to play with the fact that the undercover officers were obviously far older than they were trying to pass as I can forgive them that.

In short, 21 Jump Street has surprising continuity with the television show, some great performances (in particular for Dave Franco), and even Channing Tatum at least showed that he was in on the joke that people think he is a rather stupid person (hey Chan, count me as one of those people).  If I wanted to be really generous, I would argue that 21 Jump Street is almost a story about getting a second chance to redo your high school experience and 'improve' it.  However, I doubt they were going that far.

I will end with one thing.  While the cameos were good, I didn't think they were that good or funny.  Now, if Richard Grieco had appeared...