There are things about Gold Star that I think could have worked better, starting with the title.  Gold Star sounds like a war-related film, and it isn't until the end that 'gold star' is even involved, and obliquely at that.  To be fair, I figured that 'gold star' was related to those stickers children get for good work.  Gold Star is a movie that sneaks up on you, grows on you over its running time.  At first it looks a bit slow and amateurish, probably due to the fact that writer/director/star  Victoria Negri is making her feature-length writing/directing debut.  However, Gold Star starts growing into the ambitious project Negri envisions and ends up holding your interest and touching the viewer.

Vicki (Negri) is a bit lost in her personal life.  She has a hot musician boyfriend in Trevor (Max Rhyser) but apart from that, her life is in the doldrums: working late hours at the 24-hour Anytime Fitness and enduring the inane comments of an older patron who shows up at 4 in the morning and is specific about treadmills even though the place is empty.  In all of this she gets bad news from her mother Deanne (Catherine Curtin): Vicki's 90-year-old father Carmine (Robert Vaughn in his final performance before his death) has had a stroke.

Vicki, reluctantly and somewhat disinterested, goes to them.  She loves her parents but is also distant from them, sensing herself as a bit of a disappointment in that she did not pursue music despite both her parents being music teachers and Carmine a master pianist.  Vicki also struggles with her half-sister Maria (Anna Garduno), who openly asks for her mother's piano in front of the mute Carmine.  Maria, a selfish person with a disorganized life, is a source of tension for Vicki.

Vicki finds herself having to be a caretaker to Carmine whenever she can spare the time and sometimes the interest.  At the hospital, she meets Chris (Jacob Heimer), whose grandfather also had a stroke.  They slowly strike up a friendship, though the awkward and self-conscious Chris is as openly attracted to Vicki as one can be without actually saying anything.

Vicki finds her situation frustrating, finding no release anywhere: at home feeling isolated, even angry, at work feeling dead, with struggling between pursuing a romance with Chris and pushing him away.  After a bizarre sex turn with Trevor, she appears to end the relationship and rely more on the steady, caring Chris, though that relationship has its ups and down.  After the cantankerous gym member suddenly dies at the gym, Vicki begins her journey to finding peace with all those around her: her father, her mother, her sister, and Chris. 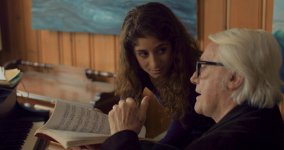 At first, I was a little disconcerted by how things seem to be moving slowly, down to when Chris and Vicki have their first full conversation.  There seemed to be a lack of energy, as if Negri and Heimer were waiting for the other to say their line before the other spoke.  It does seem surprising that Chris failed to get a Silence of the Lambs reference, or that Negri appeared to not be enthusiastic about it all.

In retrospect though, while I think Negri could have pushed herself and the other actors to be a little more natural in how they spoke to each other, I put this to Negri being a first-time director and being perhaps a bit overly cautious to not have people overact.

That was not a problem for Vaughn, an actor who I think never got as much credit for his abilities or the showcase for them.  It's unfortunate that my only clear memories of Vaughn are in Superman III and commercials for a local law firm where he was forced to speak in Spanish ("Yo soy Robert Vaughn" is still a source of humor among some in my circle).  True, while he had a few classics in his résumé (The Magnificent Seven), Vaughn deserved a better career.  With Gold Star, he had to silence his magnificent voice and rely solely on his eyes and face to express himself: the frustration of trying to communicate, the wry acceptance of Vicki's temperament, the love for his daughter.  It was a beautiful, tender performance, a showcase for a talented and underused actor.  Gold Star is a fitting and elegant swan song to his career.

A nice surprise is Negri's supporting cast, particularly Heimer as Chris. Heimer makes Chris into a caring, awkward, flawed and most importantly realistic person.  He is a bit of a pushover (though barely knowing Vicki, he is eager to drive her around, even picking her up late at work and seems curiously untroubled by the fact she looked him up online to get his phone number).  However, Heimer shows Chris' genuine kindness and insecurity, even shyness around Vicki.  I hope Heimer can use Gold Star as a calling card for bigger roles and that he won't be typecast as 'the nice guy'.

Curtin too does a wonderful job as Deanne, a woman who like her daughter, loves her family but can also be short-tempered and well-meaning but thoughtless (insisting her daughter use dressing on her salad for example, to show caring on her side, controlling nature to her daughter's point of view).  I had some qualms about Garduno as Maria, particularly when she tried to show 'anger' when searching for her father and mother's wedding picture where I thought she was a bit over-the-top.  However, like most of Gold Star, her final scene when Vicki goes to her house and gives her the picture that Vicki found and invites her to see Carmine, Garduno's quiet and calm response was, to me, more realistic.

As for Negri, Gold Star makes a strong case for her growing abilities as a writer and director.  There are flaws: again, I got the sense that some of the actors were holding a bit back, and sometimes the script veered into strange territory (the kinky sex scene where Trevor puts duct tape on Vicki's mouth and wrists as some form of weird foreplay seemed to come out of nowhere, and we never saw the actual breakup).  These, however, I imagine are rookie errors, and I think Gold Star makes a good case for Negri to develop her craft behind the camera.

I confess that for maybe the first third of Gold Star, I was feeling a bit distant from it.  However, like the Chris and Vicki relationship, the film grew on me, moving me emotionally as this Millennial navigates her way into finding peace with herself and those around her.  At the end, Gold Star hits the marks it aims for, where you see Vicki, this flawed, imperfect figure, become a better person who has hope.  It's by no means a perfect movie, but with steady directing from Negri, strong performances by the cast, especially Catherine Curtin and Jacob Heimer, a moving story, and Robert Vaughn in his farewell performance to hold our interest, Gold Star is a good debut for all concerned.