The Disaster Artist: A Review

I'll be frank: I did not go into The Disaster Artist willingly.  Something about celebrating someone for a spectacular mediocrity does not sit right with me.  This is not like Ed Wood, in that Wood was already dead by the time we got Tim Burton's loving tribute to the oddball filmmaker.  Tommy Wiseau, the subject of The Disaster Artist, is very much alive to revel in the celebration of being inept and talentless.  The Disaster Artist, I figure, is a salute to all the dreamers who aim high only to fall spectacularly but somehow still end up successful almost because of how incompetent they are.  I still feel though, that the Wiseau that I saw portrayed is not someone who should be feted.

He is someone to all but avoid.

As both James and Dave Franco are in The Disaster Artist, I'll refer to them as 'James' and 'Dave' to avoid confusion.

Aspiring actor Greg Sestero (Dave Franco) finds himself struggling to be open in his performances, fearful of failure and rejection.  Such hangups are no problem for the mysterious Tommy Wiseau (director James Franco).  He has no problem expressing himself fully in acting class, screaming "STELLA!" repeatedly and literally climbing the walls.

Such openness fascinates Greg, who asks Tommy to read with him.  The uninhibited and downright bonkers Tommy welcomes his new friend into his world, though his world is one that leaves many questions.  Tommy insists that he is near Greg's age despite Greg at this point being 19 and Tommy looking like he's in his 30's if not 40's.  Tommy claims to be from New Orleans (the one in Louisiana, he helpfully adds) despite a strong yet vague European accent, Eastern most likely.  He has unlimited financial resources despite not having any known or discernible means of income.  Despite knowing him for a few months at most, Greg eagerly goes from San Francisco to Los Angeles with Tommy to pursue his acting dreams.

Times are tough for our odd couple as acting jobs are hard to come by, both for the all-American good-looking Greg and the "all-American good-looking" Tommy (Wiseau stubbornly insisting he is both despite all evidence to the contrary).  Greg has managed to find a girlfriend, Amber (Alison Brie), a barmaid whom Tommy has a strong dislike, his curious possessiveness of his 'baby-face' unexplained, like a lot of things in his life. 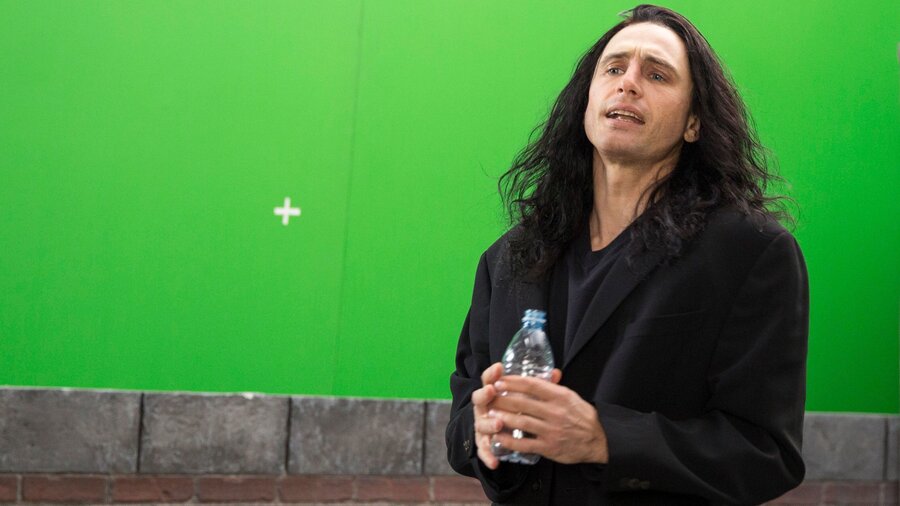 Wiseau has a rare moment of doubt, but Greg's casual comment about making a movie themselves sparks Wiseau's interest.  He decides to write, finance and direct his own film so as to get into cinema.  His script, which he declares "the greatest drama since 'The Tennessee Williams'" is called The Room, and Greg is to be the second lead.  One guess as to who the first lead is.

It takes no time to show that Wiseau knows nothing about filmmaking, with Greg somewhat eagerly going along with whatever oddball decisions our faux-Fellini makes.  Why rent equipment when he can buy?  Why use a real alley when you can have an exact replica built?  Why decide between film and H-D when you can shoot in both simultaneously?  Why use a perfectly normal and functioning toilet when you can have another one put in for your own exclusive use, even if it is covered with drapes for privacy?

As production on The Room continues, it becomes clear to the Director of Photography, Raphael (Paul Scheer) and script supervisor Sandy (Seth Rogen) that their director is not only completely incompetent (Greg had to whisper to Wiseau what a 'D.P.' was), but that he was also cruel.  Sandy, cueing Wiseau when he was 'acting', struggles through 67 takes to get Wiseau to say the lines Wiseau himself wrote. Raphael gets into a fight with a naked Wiseau when he insults his female lead, Juliette (Ari Graynor) after calling her ugly.  Wiseau insists on showcasing his ass on camera much to everyone's horror, then couples that with thrusting himself too high, making it look on camera as if he's trying to have intercourse with the character's belly button.

Despite all this, the crew keeps pushing on. Despite the wretchedness of the script (the actors flat-out tell him he has plot points that he doesn't bother to bring up again, let alone resolve). Despite even his refusal to pay for air conditioning or water causes an older actress (Jacki Weaver) to faint, Tommy's only reaction to her fainting due to heat stroke is asking if she decided to take a nap.

In a 40-day shoot, The Room goes into 52 days at least, but in that, Wiseau's pull over Greg is so great that when offered a chance for a guest spot on Malcolm in the Middle, arranged by MITM's star Bryan Cranston himself, Greg opts for the disaster he knows The Room is.  When Wiseau tries to add extra footage by recreating their first meeting, Greg finally has enough and leaves.

Eight months later, Greg is in a better place, playing Biff in an L.A. production of Death of a Salesman.  However, to his horror, The Room finds its way into theaters.  Wiseau gets him to attend the premiere, and the gang is brought together again.  The audience is first shocked, then amused at The Room, laughing uproariously through it all.  Even the cast and crew find themselves laughing through it all.  It's only when Greg starts laughing too that Wiseau leaves the screening, hurt that his masterwork is ridiculed.  Greg gets Wiseau to see that the audience loves his work, and him.  With that, their friendship is restored and The Room becomes the cult film that is now. 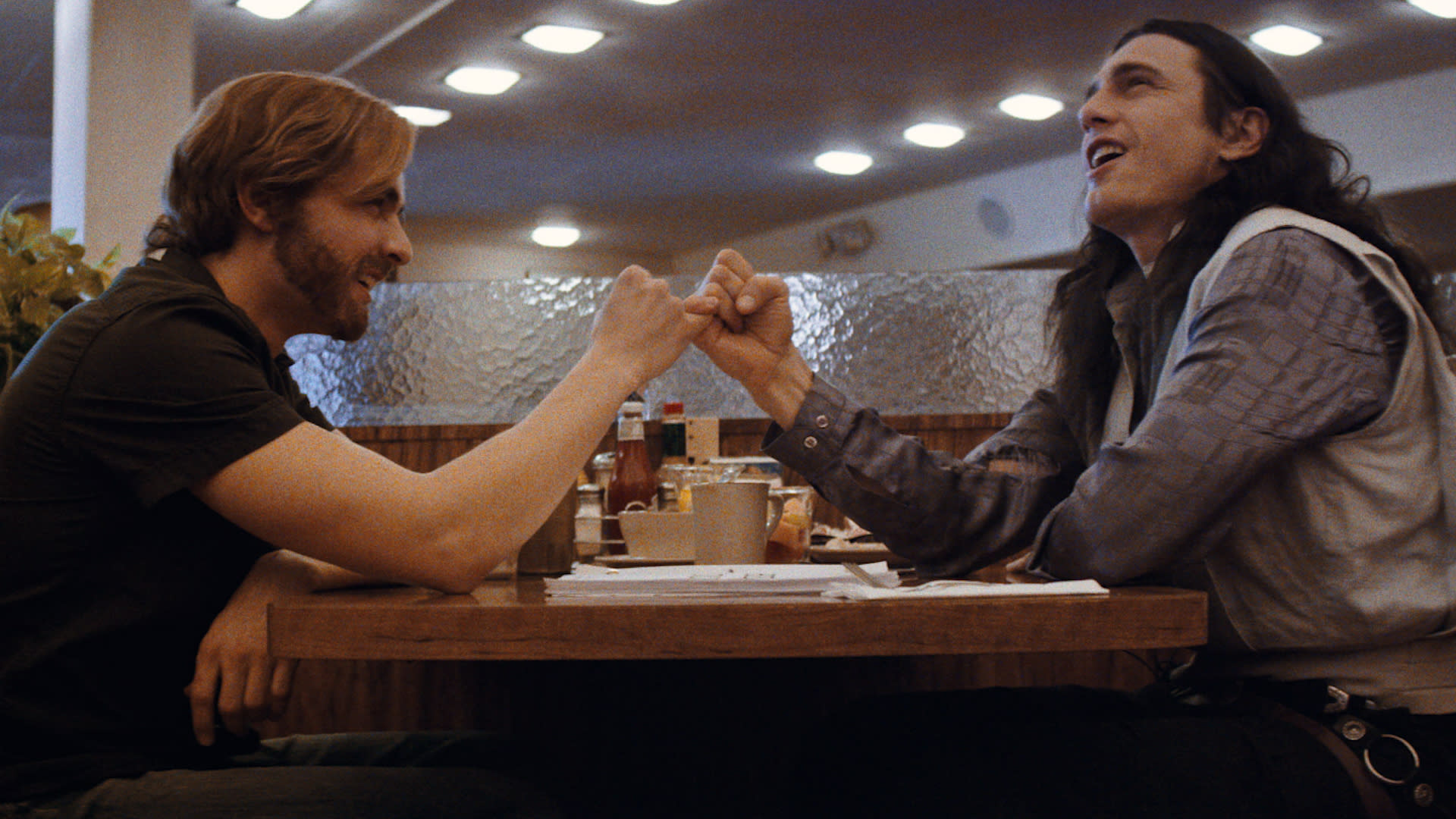 I admit I have heard of The Room but have never had a desire to see it.  As we are treated to both clips and recreations of it, I can imagine The Room to be a genuine disaster, and I say this as someone who has seen both Plan 9 From Outer Space and Glen or Glenda?.  The Disaster Artist has its heart in the right place in making a film that lauds someone whose ambitions were greater than his abilities.

Nevertheless, as I sat watching it with others, who found the whole thing hilarious and probably knew more about The Room than I did, I could not shake the idea that we were meant to laugh at Wiseau, not with him.  I never laughed at Ed Wood while watching his eponymous biopic because despite himself his character was endearing, almost naive and sweet in his total incomprehension of his lack of talent.  Wiseau, on the other hand, comes across as genuinely insane (more than once I wrote or thought to myself variations on 'the guy's a nutter!').

As much as James is being celebrated for his performance, and I do think it was a solid turn, I felt that it was more of an impersonation of Wiseau's accent and mannerisms than a distinct character.  James makes Wiseau look drunk, drugged or barely awake many times, and shockingly unaware of reality.  Megan Mullally has a small role as Greg's mother.  Mrs. Sestero is shocked to see her little boy run off with someone he barely knows and she has never met.  Forcing her way outside to talk with Wiseau, she asks him how old he is.  "About his age," he responds in his slightly out-of-it way.  An incredulous Mrs. Sistero responds Greg is 19, then adds sarcastically that she 'just turned 14'. 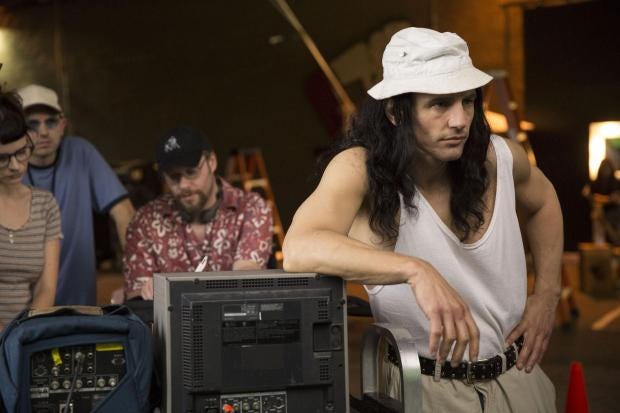 "Well, Happy Birthday," Wiseau replies in a perfectly sincere and loopy way, as if sarcasm and reality don't register with him.

To his credit, James is not afraid to show the darker aspects of Wiseau's personality: his jealousy, his possessiveness, his disinterest in anything apart from how it relates to him.

Was it a good performance?  Yes, but I still felt it was more impersonation than actual character at times.

It is surprising to me that Dave has not been as well-recognized as James for playing the straight man to our bonkers Hitchcock in waiting.  In his insecurity, in his loyalty, in his hesitancy and desire to move forward, Dave gives as well-rounded a performance as any.  I think better of Dave than of James in that Greg is a generally unknown quality versus the better-known Wiseau, so his role was tougher in my view.

The Disaster Artist is a well-made, well-crafted film.  Nevertheless, no matter how much it tried, I could not join in to salute someone for being a spectacular failure, one who seemed a bit bonkers and whom we are asked to laugh at rather than laugh with.  Yes, I laughed too: you can't help laugh when you hear things like Wiseau asking if he really looks like a 'vampire rapist'.  However, I couldn't get into the joke as much as those who find The Room and Tommy Wiseau a delightful romp.