The Librarians: And the Silver Screen Review 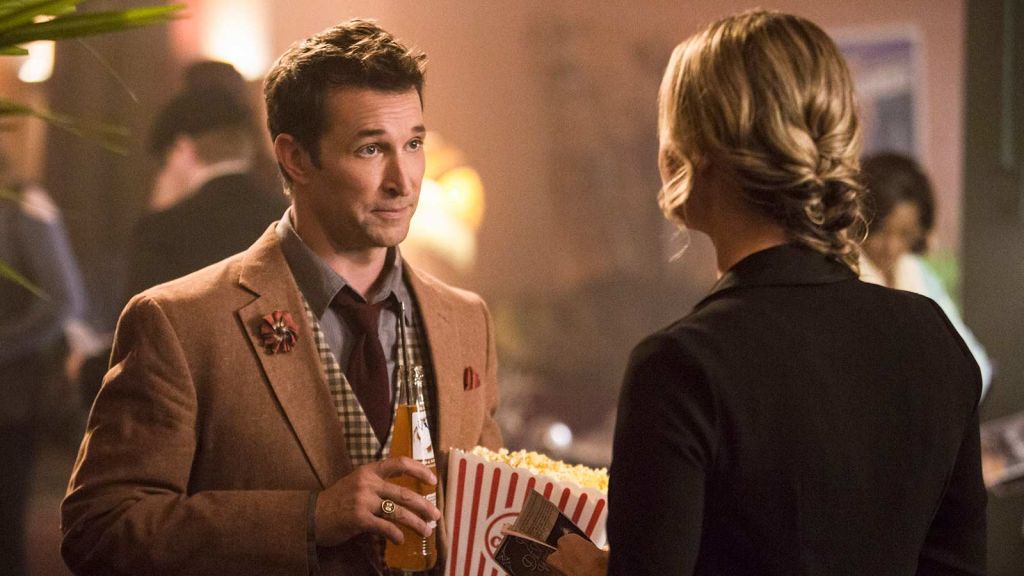 THE LIBRARIANS: AND THE
SILVER SCREEN

Ah, one can't be a good old night at the movies.  Who doesn't love getting lost in brilliant stories, or stories that evoke something within you?  With And the Silver Screen, we take that 'getting lost in a film' bit to a whole new level.  This Librarians episode is a great love letter to the power and wonder of 'classic' films, good and bad, with a pretty easy-to-figure plot but one that works so well you don't mind knowing where you're headed.

Guardian Eve Baird (Rebecca Romijn) and her paramour, Librarian Flynn Carsen (Noah Wyle, who wrote the episode), are having a rare night off just for themselves (their relationship seems to be a running thread this season, as this is the second episode to feature them apart from the other Librarians to concentrate on 'me-time').  Baird, a big-time classic film fan (the type who probably dreams of being a guest host on Turner Classic Films) takes Flynn to a film festival retrospective featuring the directing of one James Desmond Wheeler.

While watching the film noir The Found, The Lost and The Looking, Flynn and Baird are suddenly thrust into the film itself (a touch of The Purple Rose of Cairo).  This shocks the audience and leaves Jade Wells (Gloria Reuben), who opened up the art-house movie palace after restoration, a bit perturbed to say the least.

The other Librarians: Jacob Stone (Christian Kane), Ezekiel Jones (John Kim) and Cassandra Cillian (Lindy Booth) are worried that 'Mom and Dad' haven't returned from 'date night' in over twenty-four hours, so they go to the theater and are stunned to see them inside the screen, ranting and desperate to get out. Soon, Eve and Flynn hit on the idea that to get out, they have to recreate the film to its conclusion.  Eve, who's seen the film many times, guides him to be 'Mac Doyle', roguish private eye as she becomes 'Kitty Dupree', his Girl Friday. In an effort to get Flynn and Baird out of the screen, Jenkins (John Larroquette) works with Jade to find the magic object that got them in, while the other Librarians decide to jump in and rescue them out of The Found, The Lost and The Looking.

Only problem is that Jade's theater holds three screens, and they end up in the Western musical Chaps in Chaps by mistake.  Now they have to get out of that film first before helping Flynn and Baird.

As 'Kitty Dupree' and 'Mac Doyle', it's up to them to recreate their film, even if it means Flynn will have to undergo the traditional punch-ups his hardboiled gumshoe endures.  However, to their surprise, after they finish the film...they end up right back at the beginning.

The other Librarians manage to get out of Chaps in Chaps but end up in Brain Robbers From Planet Alpha Xenon Six, a Z-picture if ever there was one. Fortunately, Cassandra has seen this film, so she knows where the plot goes.  Unfortunately, she forgot some parts, so they do run the risk of getting vaporized.

Jenkins and Wells discover the typewriter where her father, James Desmond Wheeler, wrote all the scripts (the one object tying the films together).  They also discover that The Found, The Lost and The Looking was changed from the original ending, hence the failure to 'finish' the film correctly.  The original script was written by an 'E. Darnell', but where is the original ending and who is E. Darnell?

All is resolved when 'Kitty' and 'Mac' solve the actual mystery behind the noir façade, and it helps that the other Librarians finally managed to get into the right film.  Jade Wells also finds 'E. Darnell', 'E' being for Eleanor (Margaret Avery), her father's former assistant.  Jade had grown to appreciate her 'adopted' father's work later in life, but now finds that Eleanor was not just her 'adopted' father's own Girl Friday, but her natural mother...and Wheeler was indeed her natural father.  A whole rouse had been created to cover up a potential scandal, and Eleanor wrote the noir film in the hopes of having the real story eventually discovered while using symbolism to hint at her meaning. Wyle digs deep into Hollywood history, and while these are only guesses they did come to mind while watching.

The name 'Jade Wells' could be an echo of Rebecca Welles, Orson Welles' only daughter.

The director's name, 'James Desmond Wheeler', reminded me of another film director, William Desmond Taylor, a silent film director whose murder, among the first Hollywood scandals, remains unsolved to this day.

Jade being 'adopted' by her actual parent is probably calling back to Loretta Young.  Clark Gable got Young pregnant, though whether through a consensual affair or a rape remains unclear.  Young, who was unmarried, could not possibly have an out-of-wedlock child in the 1930s.  Young was also a devout Catholic, so an abortion was out of the question.  An elaborate plan to have the child, a daughter, secretly, then come around and 'adopt' her was used.

In terms of performances, guest stars Reuben and Avery did a great job as the flustered movie-house owner and mysterious figure respectively, and even though you knew that they'd be connected you went along with it.  Wyle and Romijn worked well together, playing up the traditional roles of the detective and shrewd aide.  "Women did the sleuthing, men did the punching," Baird tells Flynn as to why she gets to investigate while he gets  punched.  I'm not sure about that, given most women in noir films were femme fatales or dolls, but again, you roll with it.

It also gave Kane a chance to show off his singing when he and the other Librarians are in the Chaps in Chaps segment.  Kane has a second career as a singer, so I'm figuring the singing of the cowboy ballad was his.  He has quite a nice, strong voice.

In regards to the resolution, it did appear a bit fast and predictable, but that's about the only thing I can fault the episode in.  A nice homage and love letter to films of yesteryear, And the Silver Screen was another nice, light  romp.  Granted, I don't think film noir, Westerns, or science-fiction were that campy, but if you want better examples, I suggest TCM over TNT.

Next Episode: And the Bleeding Crown
Posted by Rick at 4:47 PM