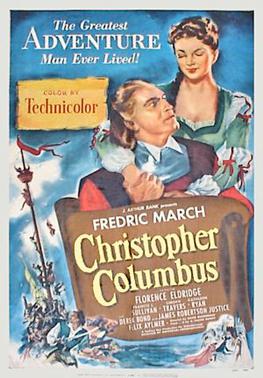 Long before our revisionist age, long before he was held personally responsible for everything from slavery, rape and genocide to white supremacy and climate change, Christopher Columbus was thought of as a good guy. We even took Columbus Day off. As such, Christopher Columbus can be almost a time capsule of when our Italian sailor was seen not the embodiment of all evil but as a noble even courageous figure. The film trades in some myths and is perhaps a bit too posh for the story it wants to tell. However, Fredric March can make just about anything worth the time.

Christopher Columbus (March) comes to Spain to attempt to court Her Majesty Queen Isabella (Florence Eldridge) to fund his expedition. He believes a faster and cheaper route to the East can be had if ships sailed west rather than around Africa or travel through Asia. He faces strong opposition at Court from Don Francisco (Francis L. Sullivan). Part of his objection comes from his refusal to see the world is as round as he is. Part of it comes from fearing that his family fortune will evaporate if a faster route is found.

Columbus waits while the Court hems & haws, but he gets an unexpected ally in the Widow Beatriz (Linden Travers), who has eyes for intelligent men. She has a plus in that she's Francisco's cousin, but a minus in that randy King Ferdinand (Francis Lister) has designs on our merry widow. Columbus also has another friend at Court, Diego (Derek Bond), a royal notary who pledges to sail with Columbus once he finally wins Her Majesty over to his side.

At long last, Columbus gets his three ships and sails towards the New World, but as the crews of the Nina, Pinta and Santa Maria keep sailing, it takes all of Columbus' wits and force to keep the crew from mutiny. Finally, he discovers his new world, but it's not all happiness at the end.

Christopher Columbus suffers from a curious tone of stuffiness and unearned poshness. Director David McDonald went overboard in making most of the acting very mannered and theatrical. Almost everyone at Court behaved as though they knew they were in some grand epic situation versus playing up Court intrigue.

This is not helped by some curious decisions McDonald and screenwriters Muriel & Sydney Box and Cyril Roberts made. Of particular note is in giving two characters the same name: both the merry widow and Diego's supportive cousin are named 'Beatriz'. Soon it becomes muddled trying to remember which Beatriz one is referring to. Christopher Columbus also forgets about Chris' son, introduced in the beginning and not only never mentioned again but almost erased altogether. At one point when Cousin Beatriz offers her views on marriage, Christopher comments that he as an explorer should not be tied down with a wife and child.

This is odd given he already has a child, which he doesn't seem to remember.

Giving two characters the same name is bad enough, but for the longest time Christopher Columbus resisted giving his antagonist a name at all. It's more than halfway through the film that the fat 'learned friend' with whom Columbus must battle against is given a name.

Finally, Christopher Columbus seems to be a whole slew of films put together. There's Columbus' efforts to win Court favor, the hints of interest with the Lady Beatriz of which Chris is mostly oblivious to and the actual voyage. It's a curious mishmash that ends up undercutting the others. 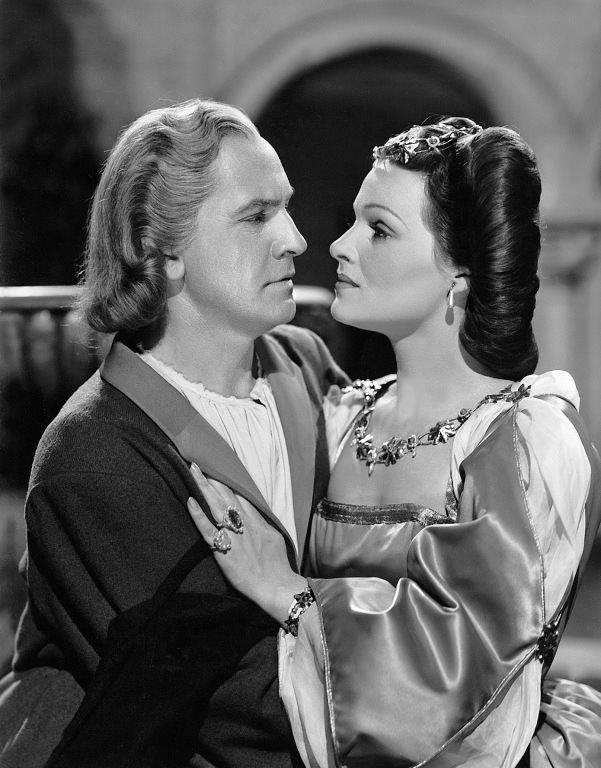 Even then the ideas that Columbus knew there was a New World or was one of the few who knew the world was round was wildly inaccurate. Moreover, the willingness of the Native population to embrace these newcomers comes off as patronizing, as does the explorers' intentions of only seeking converts to Catholicism with a little gold-hunting on the side.

However, Christopher Columbus has some positives. At the top of the list is March, who makes Chris into a committed and passionate advocate for his 'crackpot' theories. He even makes Chris' obliviousness at Lady Beatriz's pursuit slightly amusing. It's only at the end when he faces Their Majesties one final time that he slips into a bit over-the-top manner. March's real-life wife Eldridge was elegant and appropriately posh as Her Majesty Queen Isabella, while Travers' Lady Beatriz was not quite the vixen or supporter she was tasked to play. Both veered towards the more theatrical manner but it's not a deal-breaker for me.

Bond's Diego seemed superfluous to the film and a bit over-the-top, while Sullivan's Don Francisco shifted from menacing to mirthful depending on what the script asked. The imbalance of the role lies more in the script than in his interpretation.

Christopher Columbus is not a particularly good film. Despite its short running time it felt like a slog and by the end one starts losing interest. However, Fredric March makes it worth the time. The film adds to the myth of Columbus versus the almost gleeful tearing-down of Chris' legacy popular today. A bit stage-bound but not without some merit, Christopher Columbus could have been better but if it's any good it's due to Fredric March's performance.