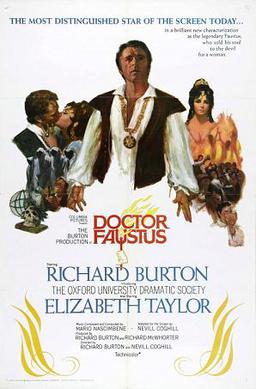 Doctor Faustus (Burton) an esteemed educator and scholar, has achieved the apex of human wisdom. Now he seeks greater knowledge, as well as power, riches and his own earthly delights. Now having degenerated into practicing the dark arts, he summons the demon Mephistopheles (Andreas Teuber) from Hell to be his personal slave. Mephistopheles tells Faustus he is already serving Lucifer himself and can only serve Faustus if the Devil himself permits it.

Faustus will not be denied and agrees, despite hearing the Voice of the Good Angel to turn away from his blasphemy, to surrender his soul to Lucifer in exchange for Mephistopheles' services, granting him every wish and power. Faustus signs away his soul with his own blood, and now Faustus sees the personification of the Seven Deadly Sins, plays parlor games with The Emperor (Ian Marter) and tricks on The Pope's Court. He also sees the beautiful Helen of Troy (Elizabeth Taylor), beckoning him into temptations of the flesh.

Every so often Faustus comes close to repenting and turning to Christ for redemption, but that only angers Lucifer who holds him to his pledge. Moreover, Faustus keeps coming back to his own thoughts, which are not built on divine but earthly things. Eventually, his twenty-four years are up and despite his faint pleas Helen drags him to Hell.

As Doctor Faustus came from a stage production, Burton and Coghill opted to keep many of the stage trappings. They also opted to keep the Oxford University Dramatic Society players that were part of the original Oxford production.The term 'amateur theatrics' was pretty much created for such things, and seeing the still-training actors attempt to match Burton's almost self-parody is not a good way to begin. The acting from all but one seems to be quite theatrical as to almost be farcical.

Burton does himself no favors with his performance. I imagine that on stage, where one can be broader and louder with not much fussy, his Faustus would have been a bang-up job. On screen though, he looks in turns bored and hysterical in every meaning of the word. Sometimes the Burtonesque qualities that would make for dynamic or at least entertaining staging becomes a bit bizarre on film.

As he ponders what he would accomplish if he had ultimate power and wealth, he says he would "ransack the ocean for pearls". Only thing is, his pronunciation of 'ocean' is 'oh-SEH-ahn', which comes across as, well, bonkers.

The ever-lovely Liz is mute in Doctor Faustus, the most action she has is to beckon the bad doctor apparently in the nude. Her one sound is a cackle as she leads him to Hell, and here the whole scene is hilarious: Burton's wild hysterics, Taylor's glances, the scenery, cinematography and music all conspiring to make this sad. 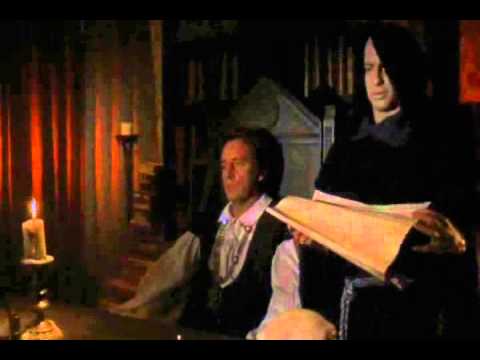 Only Teuber as Mephistopheles shows anything of promise. In his quiet yet creepy manner, he makes Mephistopheles the more sympathetic character, the demon who knows that Hell is a place of misery and torment because of the absence of God.

The visuals also are interesting in a bad way in Doctor Faustus in that they call attention to themselves. Sometimes the decisions Burton and Coghill made seem quite strange: the gauze in some scenes, the glowing skull, the Garden of the Seven Deadly Sins being so insufferably artsy. Same goes for the 'comedy' at the Pope's Court, complete with choreographed dancing that seems to mock Catholic ritual but fail to provide any genuine wit to things.

Perhaps Doctor Faustus' greatest sin is that we do not get an interesting or complex lead character. Whatever internal struggle within Faustus, whatever sense of guilt or pleasure he had isn't there. He is nothing, and his fall is just a series of sets and scenes that have nothing going for them.

If there are one or two qualities in Doctor Faustus it is in Mario Nascimbene's score (even if at times it becomes intrusive) and some wit in the screenplay, though I suspect that was from the original material. "Nay, and tell me what good will my so do thy lord?", Faustus asks his potential slave. "Enlarge his kingdom," Mephistopheles answers calmly. "Is that the reason why he tempts us thus?", Burton thunders. "Wretches find comfort in fellow suffers," is Teuber's calm reply.

Doctor Faustus is worth watching only if you want to see how late-era Richard Burton would have been on the stage. It's almost a game to see how this production would have matched the Oxford stage version. Apart from that it is not worth seeing.

Beelzebub, part of Lucifer's unholy trinity, admonishes Faustus from attempting to return to the path of redemption. "Remember, Faustus, sweet pleasure conquers deep despair. In Hell is all manner of delight". I know this to be not true, for sitting through Doctor Faustus would be Hell and there is no manner of delight there.

DECISION: D+
Next Burton & Taylor Film: The Comedians
Posted by Rick at 5:10 PM