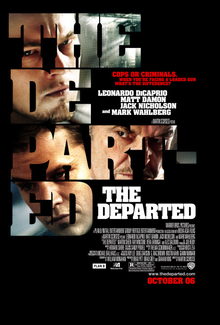 The Departed got director Martin Scorsese his long-sought Best Director Academy Award. Scorsese's remake of the Hong Kong film Internal Affairs keeps to some excellent moments, some wobbly Boston accents and a good though not great film.

Boston crime lord Frank Costello (Jack Nicholson) grooms preteen Colin Sullivan to eventually become his mole inside the Boston State Police. Colin (Matt Damon) rises through the ranks and his information keeps Costello one step ahead, but there's a hitch. Another department stubbornly refuses to give Sullivan the name of the mole in Costello's organization who like Sullivan has worked his way up.

That mole is Billy Costigan (Leonardo DiCaprio), himself a scion of a Boston crime family who wants to break away from his family's past. Under Captain Queenan (Martin Sheen) and his right-hand man Sergeant Dingam (Mark Wahlberg), Costigan uses the family name to work his way to Costello's side.

It soon becomes a game of Spy vs. Spy to find who is the rat. The subterfuges of Sullivan and Costigan isn't the only deception going on, as both of them become romantically involved with the same woman: psychiatrist Madolyn Madden (Vera Farmiga), though the former has a longer and deeper relationship to where she moves in.

Not having seen Internal Affairs, I cannot say how close or far The Departed is from the source material. I can say that The Departed kept that balance between the separate moles rather well until the climatic drug bust, with still at least half an hour to go. That perhaps is one of the film's weak points: it seems to go on much longer than it should. Granted, we needed to wrap up the story but some things felt a bit off.

The subplot with Madolyn seems not just absurd but unnecessary, at least the idea that she would end up sleeping with both rats. It's as if William Monaghan's screenplay wanted to make the parallels between Sullivan and Costigan be a bit too exact.

You also had a rather odd denouement where Madolyn discovers Sullivan's deception. Rather than turn the information to the police, she just locks the door after confronting Sullivan. Even more bizarre is the whole ending: Costigan's fellow officer was apparently contacted by him but he still struggles to accept Sullivan is the traitor. Add to that the end of both a second and never-hinted-at mole and Sullivan's own end and things just felt rather rushed.

As if the rat crawling on the ledge of Sullivan's posh apartment at the end of The Departed was not an exclamation point enough.

Other elements, such as Costigan's growing prescription pill addiction or Costello's FBI protection were dropped in but not made much of.

Monaghan's script, however, did have some positives. Costello calls Sullivan 'Collie', subliminally pointing out that for all Sullivan's intelligence and the faux-paternal manner between them Costello considered him essentially his dog. The younger men are tasked to essentially become what their 'father' Costello wants them to be. As such, both deny their true natures (rotten for Sullivan, dutiful for Costigan).

The Departed is a film drenched in Catholicism, particularly in a sense of guilt that comes from betrayal. Both Sullivan and Costigan betray their fathers be it biological (Costigan's decision to be a cop versus a hood) or spiritual (Sullivan causing Queenan's death to take attention away from himself).

Scorsese has some excellent visual moments, such as Costigan's pursuit of Sullivan (though he cannot see Sullivan's face), Queenan's death, an attempted bust on Costello and the climatic drug bust that brings them all into conflict. He also gets strong performances out of his cast.

Damon and Wahlberg, both Massachusetts natives, handle the Boston accent best. I'm surprised that the latter was the one singled out for his performance given that playing a foul-mouthed hair-trigger tempered working-class Bostonian is not exactly a stretch for Wahlberg. As the false cop, Damon was better though by the end he seemed surprisingly dim and detached. DiCaprio was hampered primarily by his efforts to drum up a convincing Boston accent. I found his character a bit one-note but on the whole I think he did well.

As much as Nicholson may be criticized for being over-the-top as the arrogant and increasingly bonkers Costello, I thought well of his performance and thought he played the part as it was written. Farmiga was given a somewhat thankless job as the only female character of note who serves as little more than the bedmate to both men. The standouts were Ray Winstone as Mr. French, the ever-loyal second to Costello who brought menace even when calm and Sheen as the moral Queenan, the only untouched man in this sleazy business.

The Departed is a strong crime drama that keeps the audience within the loop to the game of cat-and-rat. I don't think it's Martin Scorsese's best film, but it is a good film if a bit too long in my view.