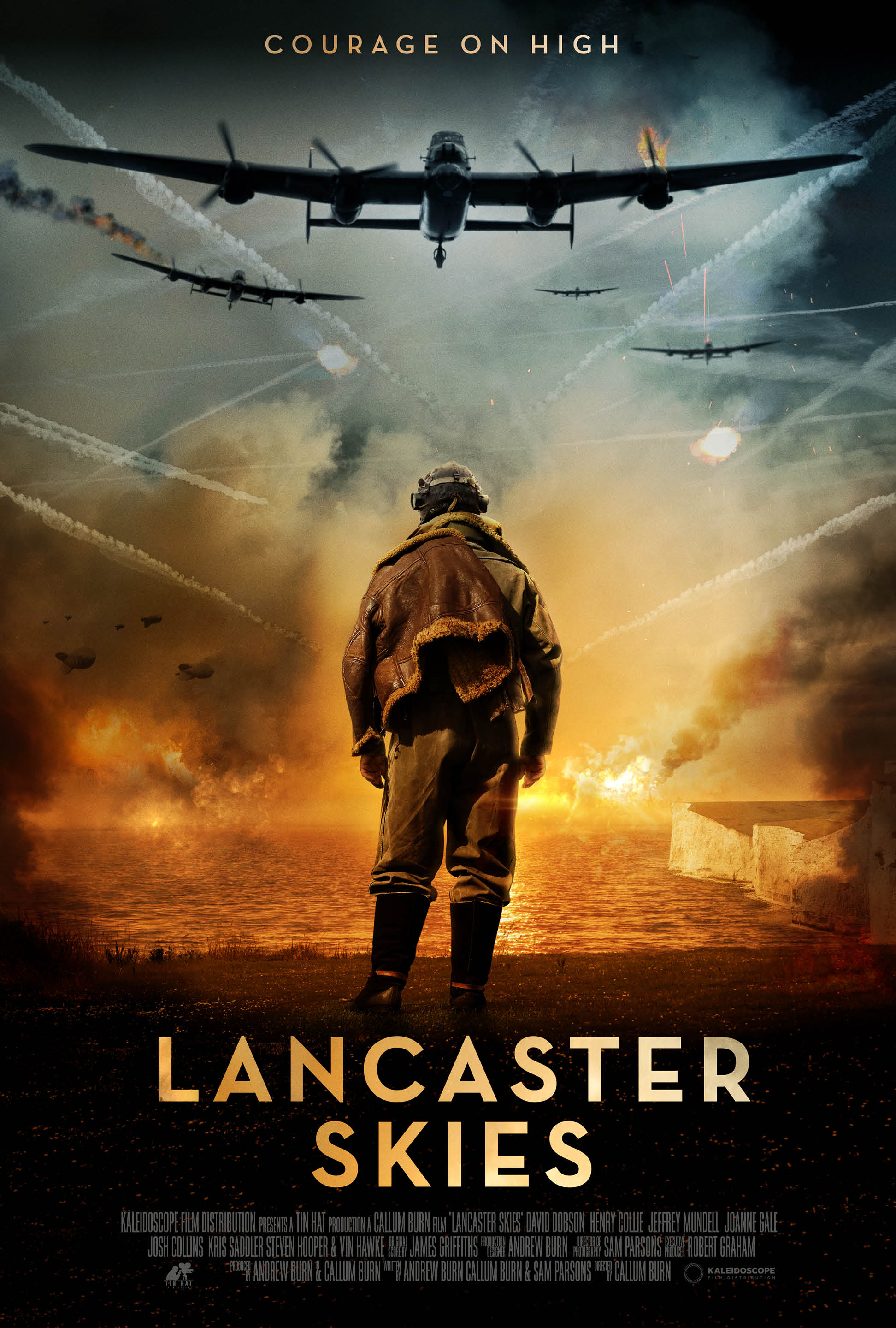 The Second World War continues to serve as subject for filmmakers three generations later. Lancaster Skies has a major drawback on the budgetary limits, but it did force the filmmakers to focus less on the daring-do of the war and more on the characters when not on the battlefront. If not for one very bizarre final decision Lancaster Skies would have been a much better albeit cheaper film.

After the death of a Bomber Command squadron commander comes his replacement, former fighter pilot Douglas Miller (Jeffrey Mundell). He is a pretty stiff figure, a loner who is haunted by events surrounding his brother Ron (Eric Flynn). George Williams (David Dobson) is Miller's more informal equal, one who gets along with everyone and who balances the responsibility of being in command with an informal and friendly way with his fellow squadron pilots.

Miller's more by-the-book manner does not endear him to his fellow flyers, but eventually he softens a bit towards them with a lot of guidance from George. Miller also catches the eye of a Women's Auxiliary Air Force officer, Kate (Joanna Gale), whose BFF Jo (Rosa Coduri) is sweet on George. Their lives mix and mingle as they await the next bombing mission. On the date the men fly off to bomb their target in Germany, secrets are revealed and perhaps not everyone comes back.

Lancaster Skies is highly reminiscent of a low-budget television movie or even a filmed play, and again it is due to the limited budget the film has. The film certainly cannot afford major war sequences, leaving it mostly to the actors and the viewer's imagination to think they are on board a bomber. I would not blame anyone for thinking that the opening and closing scene airplanes were the same ones that Ron played with. Many scenes had a sense that they were all but filmed in people's actual homes and that despite co-writer/director/editor even co-star Callum Burn's best efforts his ambitions were larger than his budget allowed (the film was made for the equivalent of $100,215.20).

What Lancaster Skies has in spades is total sincerity. It is a thoroughly uncynical film, one that is a throwback to films made in the immediate World War II and postwar era that saw the men as brave but flawed, the women strong but romantically inclined and the cause a noble one. The film openly and unabashedly celebrates the fighting men of the Royal Air Force, a film that minus a few points would easily have been made at the time.

The film also has some excellent performances. At the top of the list is David Dobson as George. He was a standout in the cast as the outwardly cheerful man who worked to integrate Miller to the other men but whom at the end we learn carries a heavy burden. Dobson's scene where he appears jocular against an infantryman while explaining via coin flips that his men ran the risk of death every day was just the start of one of the best performances I have seen this year.

Dobson hopefully has a bright future where he is allowed more chances to showcase his talent.

Mundell at first appears incapable of emotion, but we see that Miller is capable of human interaction particularly when he's on his "non-date" with Kate. He allowed a moment of vulnerability and even humor when he does a Stan Laurel impression. If one looks at how the role was written and directed, you will see Mundell played the part correctly.

The two women were also quite strong: Gale as Kate, the outspoken WAAF quickly smitten by the brooding Miller and in a sadly smaller role Coduri as Jo, her more upbeat friend and friend with benefits to George.

Lancaster Skies should not be penalized for its minuscule budget. It can be penalized for some odd decisions. While George's secret allows Dobson to show a strong dramatic side and comes as a genuine surprise, its connection to the finale is a genuine head-scratcher. The fact that it leaves everything connected to the lives of George and Douglas just open without even a hint of a conclusion is downright puzzling. Another subplot involving two other bomber pilots whom almost appear to be romantically involved came out of nowhere and led nowhere, while another pilot's subplot dealing with his own guilt came across as almost whining more than genuine.

When I think of Lancaster Skies, I appreciate its sincerity and some good performances. The ending was what knocked it down a bit for me, but I don't hold its very low cost against it. That it could do as well as it did with the limited funding is a credit to Callum and his cast and crew. I'd like to see Lancaster Skies remade with a larger budget and other actors save Dobson. Its sincerity and heart elevate it, though again, that ending...