AN ENEMY OF THE PEOPLE

Steve McQueen earned the nickname "The King of Cool". As such, it might be startling to see such a ruggedly handsome, action-oriented star as a meek scientist. An Enemy of the People was a wild breakaway from the McQueen persona, which is why it might have been quietly shunted off and forgotten by Warner Brothers and probably not known to McQueen fans. That is a terrible shame, for An Enemy of the People shows McQueen was a more adept and talented actor than he was ever given credit for.

Meek and humble Dr. Thomas Stockmann (McQueen) is like everyone in his small Norwegian village eager for the new therapeutic springs to open. As the scientific advisor for the spa, he checks the waters and they have appeared safe. The latest results, however, show that there is high contamination due to pollution from the nearby tannery which is infecting the spa waters.

He begins advising to delay the opening to allow cleanup and repairs, but that could take years. His brother, Mayor Pete (Charles Durning) urges Tom to say nothing. Dr. Stockmann is aware of the impact a delay will cost, but he is convinced that an ounce of prevention is worth a pound of cure. He goes to his friends at the local paper, where he offers his exposé. They at first agree to publish, even to share in any blowback, but the specter of increased taxes (and getting blamed for them) pushes them into silence. Finding himself more and more isolated, Dr. Stockmann is both shocked and angered at how quickly the town has turned against him.

He is declared a literal "enemy of the people", endangering not just his reputation and life but those of his wife Catherine (Bibi Andersson) and their two sons. His daughter Petra (Robin Pearson Rose) also remains steadfastly loyal, even rejecting her beau, newspaper writer Hovstad (Michael Chrisofer). Tom contemplates, then rejects going to America. He will fight it out, but it will be hard when townspeople continue hurling rocks at the house of "an enemy of the people". 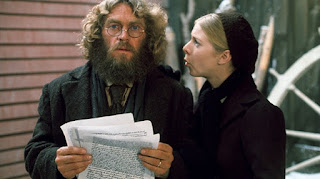 I can only guess as to why An Enemy of the People ended up frightening the studio into giving it an almost token release.  My sense is that the image of Steve McQueen as this meek, humble scientist motivated by moral outrage was not what audiences might have expected. Maybe Warner Brothers thought it was not what audiences wanted. That is a real shame, because An Enemy of the People shows McQueen was quite capable of playing characters versus just action leads.

His Dr. Stockmann was quite, contemplative, using words rather than fists to fight. McQueen gives Tom almost an innocence, a naivete that makes his shock at how the town turns against him sad and infuriating. McQueen has a wonderful bit of monologue at the end when he condemns the town for insisting that the majority is always right.

Listing off how majorities have never been right until it is too late, McQueen gives Tom a moral anger and courage but still speaks elegantly. It is not a monologue where he rants, shouts or rages. Instead, it is one where he is righteous but controlled. "The majority is never right until it does right," he tells them, and McQueen's delivery is excellent. 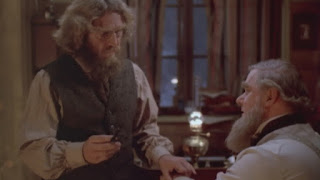 An Enemy of the People is quite well-acted overall. Durning's Mayor Pete could at times veer quite close to being a mustache short of twirling, but he also has quieter moments where he sees Tom not as an enemy but as a brother. Christofer's Hovstad evolves from a courageous liberal to a cowardly toady. Tom remarks that people like him and Richard Dysart's newspaper publisher Aslaksen (also quite good) are "radical and liberal...when it is safe". Andersson was underused as the loyal Catherine, as was Rose as Petra. George Schaeffer ably directed his actors into mostly strong performances.

Earlier, I remarked that Steve McQueen would have been successful in a stage production of An Enemy of the People. Perhaps that is what keeps the film from being better. There is something stage-bound about the film, as though we were watching a more elaborate theater production than feature film. It is not a major flaw, but you never get the sense you are in Norway. Whether it is in the house, the Messenger office or at the town meeting, An Enemy of the People feels and looks like a stage production.

I am reminded of those PBS or BBC stage adaptations such as I, Claudius, where it is obvious the actors are on a set. With I, Claudius the acting and camerawork is so brilliant that you either forgive or forget that the sets are sets. With An Enemy of the People, you do not.

Still, I think An Enemy of the People is a nice, little-known film that hopefully will find a greater audience. This is a film that I would show someone just being introduced to Steve McQueen. I would show it between say a Bullitt and The Great Escape. Freed from the overall persona, An Enemy of the People shows Steve McQueen, actor. It might not be a great film, but he shows he was better than perhaps even he gave himself credit for.