Welcome to Rick's Texan Reviews annual Christmas movie review, where we look at a Christmas-centered film. This year, we go down Mexico way, to perhaps the oddest take on jolly old Saint Nicholas ever committed to film.

Narrated by Keith Hetherington, Santa Claus takes us to jolly old St. Nicholas' literal castle on a cloud. Here, children from all over the world help Santa (Jose Elias Moreno) make toys. Santa is not able to go to Earth until Christmas Eve, leaving much room for Lucifer to wreak havoc on mankind.

His generally inept minion Pitch (Jose Luis Aguirre "Trotsky") is tasked to turn children to evil. While he is successful with a trio of bad boys, his efforts at corrupting sweet but poor Lupita (Lupita Quezadas) fails. Santa can only watch at Pitch keeps making his pitch to turn kids to the dark side. Pitch fails with both Lupita and Billy (Antonio Diaz Conde hijo*). Billy is as rich as Lupita is as poor, but a literal "poor little rich boy". He has everything a child could want, but his parents attention. They do not ignore him per se, but they are going out to swanky nightclubs on Christmas versus spending time with Billy.

At last, it is Christmas Eve. With some help from his good friend Merlin (Armando Arriola), Santa carries a powder that will put people to sleep and a rose to make him invisible. Will Pitch, however, be successful in thwarting Santa's sojourn down Mexico way? Will Lupita get her doll? 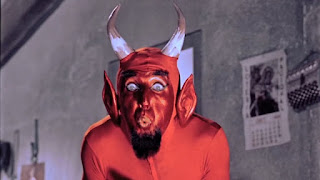 Santa Claus is, well, bonkers. I think the film is sometimes called Santa Claus vs. The Devil (though I think Santa vs. Satan would have been better); that title is just slightly more rational than the perhaps more well-known and more infamous Santa Claus Conquers the Martians. It is somewhat difficult to judge Santa Claus given that the original Spanish-language version is not as available as the English-dubbed film mocked on Mystery Science Theater 3000. I can't, however, imagine that the original is any better.

There are some absolutely cringe moments in Santa Claus that, if one is extremely generous, come across as wildly misguided. When we see Santa's children workshop in Toyland (already the notion of de facto child labor being odd), seeing the "African" children in loincloths and bones in their hair is ghastly. Not that noting the "Orient" children due an Indian dance makes things any less culturally clueless.

Other moments look like they came from a very cheap LSD trip. Of particular note is when Fetch gives Lupita a dream about the doll she wants. From out of wardrobes pop up rather frightening-looking dolls that are more terrifying than endearing. Quezadas' puzzled expression match the viewers who watch this very bizarre Ballet of the Blue Dolls.

Hetherington's narration, meant to explain things, only ended up coming across as, if not patronizing, more elementary school type. Hearing a kind of sing-song voice say things like "OH NO, LUPITA! DON'T TAKE THAT DOLL!" adds an extra level of silliness to an already whacked-out premise. 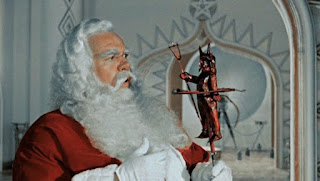 I do not think that there are any performances. On a certain level, director Rene Cardona keeps a childlike manner to how he has his actors play the roles. A lot of Santa Claus is at a child's level, so we can be a bit generous. Nevertheless, Moreno's Santa Claus can come across as a bit loony to creepy, particularly when he laughs. Trotsky as the Devil aims for whimsical, but even for something as lighthearted as Santa Claus, it can be too exaggerated.

Also, the thought of "Trotsky as the Devil" seems to work.

Despite the poor acting, weird sets, very irrational elements (somehow, the idea of parents going out on the town while their son is asleep on Christmas Eve is both strange and rational), there is something oddly charming about Santa Claus. It is like seeing a child's family drawing. It looks like a bunch of lines, out-of-alignment facial features, and nothing like what anyone looks like. Still, you find yourself delighted by the effort, wildly misguided and all.

2018: Christmas with the Kranks