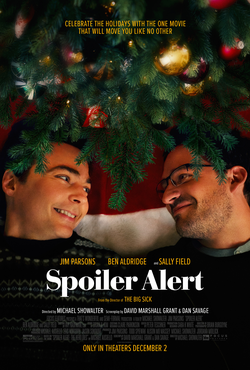 I genuinely do not understand the current series of "based on true story" films which have come down in the past few years. Spoiler Alert, based on the memoir Spoiler Alert: The Hero Dies, fails to translate between book and film, resulting in sometimes quite horrifying moments.

TV Guide writer Michael Ausiello (Jim Parsons) does not get around much. Over his better judgment, he goes to a gay bar where he meets Kit Cowan (Ben Aldridge). The two form an instant sexual attraction. Michael struggles with intimacy, due to body issues stemming from his youth as a fat kid. Despite that and a Smurf obsession that would have probably frightened anyone else away, Kit not only stays with Michael but commits full time to their relationship.

A health scare and Michael's curious status in their son's life pushes Kit out of the closet to his parents Marilyn (Sally Field) and Bob (Bill Irwin), who take the news surprisingly well. Now free to be open, Kit and Michael begin their lives together. It's not all rainbows and lollipops, however, as after 13 years they have essentially split up. They now live apart but are still not formally separated.

That is, until Kit is eventually diagnosed with a very rare cancer. This brings Kit and Michael together, and with Kit's impending death coming, they decide to get married. It, however, will end in the hero's death, leaving Michael and Kit's parents set to move on. 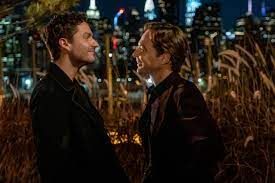 Granted, I have not read Michael Ausiello's memoir. I have never heard of Michael Ausiello's book. I have never even heard of Michael Ausiello. Perhaps that is a problem with Spoiler Alert: it suggests we should have an interest in the life of this TV Guide writer who eventually created an online entertainment news network. Spoiler Alert does not make the case that Ausiello or his story is worth knowing.
It is severely undercut when Spoiler Alert segways into deliberately fake sitcom modes. More than once does David Marshall Grant and Dan Savage's adaptation shift to Ausiello's fantasies of his early life as a sitcom. You have the deliberate artifice emphasized, but that undercuts the drama Spoiler Alert wants to give us.
These shifts probably read better in the book, but in the movie, they stop the action cold. They come out of nowhere and treating Ausiello's mother's cancer as a running gag is cringe. It may be true to the book, but somehow the fact that it is deliberately fake makes it look like it is a joke. The flights of fancy take the lowest turn when Kit is dying.
The audience is already wrapped up in what is meant to be a very sad moment. We have been told Kit has literally hours to live. He is on his hospital bed, his mournful parents in agony over seeing their only child passing away in front of them. Michael crawls into bed with him and says gentle goodbyes to the love of his life.
Suddenly, via Parsons' voiceover, Ausiello starts speculating about what if this were just another scene from his imagined biopic. All at once we hear "CUT!" and everyone gets up and showing that it is all fake. Aldridge as "Kit" is fine, even getting some coffee, with Parsons as "Michael" attempting a quick interview. Rushed interview done before having to go back to scene, we then see "Kit" dying. At that point, I became angry. Michael Showalter, who somehow managed to direct Jessica Chastain to an Oscar for a parody of a parody in The Eyes of Tammy Faye, managed to make an even worse film. As bad as that film was, even he could have seen that deliberately shifting things into "reality" and "fantasy" undercut the drama. Was it Spoiler Alert's aim to play Kit's death almost for laughs? To somehow make fun of it? To suggest that it somehow "wasn't real"?

That is the end result, and it is a terrible one. Spoiler Alert seemed determined to make as many deliberately bad decisions as it could. Certain moments are acted as though it was a television sitcom, with deliberately bad acting. Of particular note is when Kit finally comes out. The pauses, the exaggerated mannerisms from Irwin, Field, Aldridge and Parsons. The actors look as if they are aware that they are acting versus being the characters. It is sad to watch.

The acting en masse is poor, sluggish and almost openly insincere. Part of it does come from Showalter's directing and the screenplay to be fair to the actors. It is, despite the actors' best efforts, no way to make Ausiello's Smurf obsession (something that just came out of nowhere) look anything else other than psychotic. Still, the actor is there to convince you that Kit would continue a relationship with Michael despite trying to have sex with Papa Smurf looking on. They cannot.

Is it wrong to think that Ben Aldridge is too hot for Jim Parsons? That may be a strange criticism, but somehow it shows that they share no chemistry as these star-crossed lovers. To be fair, there are moments that show what Spoiler Alert could have been if things had played out straighter, so to speak. As Kit and Michael contemplate the former's diagnosis, both show a vulnerability and desperation that does come across.

Those moments are few and far between. What were Showalter, Grant & Savage and Parsons thinking when they deliberately ape a pivotal scene from Terms of Endearment? Maybe that really did happen to Ausiello & Cowan exactly as shown in Spoiler Alert. However, by this point, you think it is all fake, a terrible disservice to the story you are trying to tell.

Spoiler Alert might be a good memoir. It might even balance humor with heart, which probably attracted everyone involved to a film adaptation. It cannot balance both. Spoiler Alert, perhaps, might not be a terrible film. It is, however, a terribly made, terribly acted one.