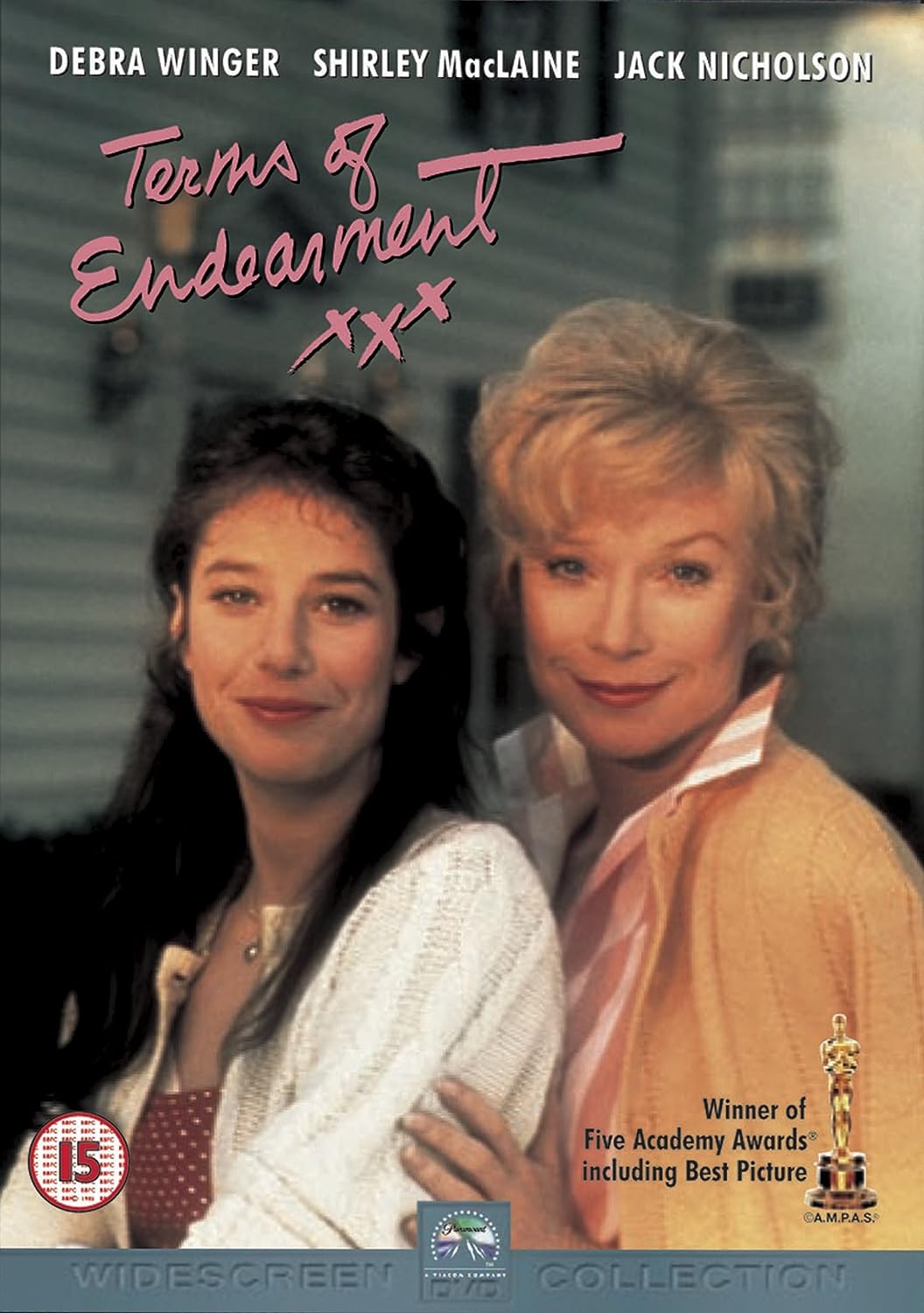 Mothers, Daughters, And Other Strangers...

Would it be unfair to call Terms of Endearment a 'chick flick'?  This is a classic weepy if ever there was a classic weepy: you've got lover and losers and women bonding and dying.   This is not to say that even a male viewer won't be moved by two people who genuinely love each other but who cannot help hurting each other as well.  Terms of Endearment is funny, sad, moving, and a surprise, true to life about that very curious relationship between parent and child: loving, frustrating, and everything in between.

Ever since her daughter was born, Aurora Greenway (Shirley MacLaine) has hovered over her and seen her as part of her own being.  Their bond grows more intense when Aurora becomes a widow. As she grows older, Aurora's daughter Emma (Debra Winger) starts chafing under Aurora's mother hen-like demeanor.  She marries Flap Horton (Jeff Daniels), whom Aurora dislikes intensely as not being good enough (though not good enough for exactly whom is subject to debate) and leaves her hometown of Houston for a new life in Des Moines, where Flap will be a college professor.

Aurora holds herself out as a grand lady, untouched by man as a respectable widow.  However, she cannot help notice the womanizing, boozing ex-astronaut next door, Garrett Breedlove (Jack Nicholson).  He is attracted to Aurora, but Aurora has disdain for his philandering.  Eventually though, she agrees to a lunch date to make herself feel better, after one of her suitors at a dinner party reveals she is 52, not 50 as she insists.

Emma meanwhile is finding life hard with her growing brood.  Despite his job Flap is a bit of a flop, with not enough to support their three children (two boys and a girl).  Furthermore, Emma is angered and upset by Flap's fooling around with his students and aides.  Emma, looking for a little sympathy and love, has a brief affair with their banker, Sam (John Lithgow), remarkably tender and hesitant, but brief nonetheless.  After finding his newest mistress, she has had enough and leaves Flap, going home to Mother.

Garrett is uncomfortable around 'family' and in particular children, his life of self-indulgence not allowing for that kind of familial interplay.  After Emma leaves to try and reconcile with Flap, Garrett ends his romance with Aurora, not wanting ties that bind.

Emma's reconciliation is short-lived, as she discovers that his 'promotion' to Nebraska was really a front to follow his favorite mistress, a former grad student.  Trying to put some normalcy in her life, Emma takes their daughter for a flu shot, and while there, the doctor finds lumps in Emma's armpits.  The diagnosis: cancer.

A brief holiday by herself to see an old friend in New York City brings no comfort, as she finds she cannot mix with the upper crust.  Treatments are not working, and Aurora comes to help in whatever way she can.  Aurora and Flap come to an understanding when it comes to the children: they will stay with their grandmother, as Flap is both too distraught and not willing to give up his womanizing ways.  Emma dies.

At the memorial in Aurora's backyard, Garrett, who visited Aurora briefly in Nebraska during Emma's illness, appears, and is remarkably good with her grandchildren.  Aurora is with her granddaughter Melanie, now unsure of what will happen next.

Terms of Endearment has a remarkably simple story: a mother and daughter who live, struggle, fight, love, and lose.  I think it's in the simplicity of things, the fact that they are real people, that has us caring about them, about what happens to them.

A great deal of credit belongs to writer/director Richard L. Brooks, who adapted Larry McMurtry's novel.  He brought moments of comedy and drama, which played as real life with a hint of exaggeration.  In the former, it is when Aurora and Garrett are finally on his long-desired lunch date.  Finding her ridiculously uptight, he makes a simple suggestion: booze to kill the bug up her ass.  Whatever his flaws, Garrett won't suffer fools gladly.  We also see it later, when while driving wildly on the beach, Garrett flies through the air.  A shocked and horrified Aurora goes up to him, and all Nicholson has to do is give that devilish grin and say, "If you wanted to get me on my back, all you had to do was ask".

In the latter, it is when Emma dies.  Brooks doesn't give either MacLaine or Winger a big, dramatic moment.  In fact, we really don't see Emma's death.  Instead, it comes quite quickly and quietly, with a simple glance away and towards Emma.  It is extremely sad to watch precisely because it is not overly dramatic.  The simplicity of it all makes it all the more heartbreaking.

Not to say there AREN'T big moments, such as the famous "GIVE HER THE SHOT!" scene, when MacLaine goes from intense, almost crazed fury to cool and calm on the turn of a dime.   She gives a fantastic performance of a woman who loves deeply, if sometimes not well.  Despite her haughtiness and even irascibility, you end up thinking well of Aurora.  You can not only understand why she would near the end of the film slap her difficult grandson who has been verbally bashing his mother, but that she did care about both of them.  Her mix of vulnerability and airs of superiority make her so real and believable.

Winger is her equal as the sometimes distraught, sometimes difficult daughter.  Emma is someone trying to survive, and again she brings that humanity to where we never see her or MacLaine acting.

And then there's Jack.  He's having a ball as the womanizing Garrett who, underneath his ego and bravado lies a genuine heart.  Daniels, in an early role, shows the promise he's fulfilled as an actor with his turn as the irresponsible Flap, and Lithgow too has strong moments as the gentle and hesitant Sam.

Terms of Endearment is a love letter to that most difficult of relationships: parent and child.  By nature, these two forces love each other but also struggle against each other.  One vies for control, the other for independence.  No matter the difficulties and strains between them, that mother and child reunion is always ultimately one of both joy and sadness.