I have found the Coen Brothers to be a very acquired taste, so much so that I have yet to acquire it.  As often as I'm told they are geniuses, I have yet to find much evidence of that.  Yes, Fargo was good, as was Inside Llewyn Davis and their remake of True Grit. However, that's pretty much it for me in the Coen Brothers department.  I'm one of the few who adamantly detested No Country for Old Men, and I still cannot bring myself to watch A Serious Man again (unless it's part of some mad scientist plot against me).  Now we come to Hail, Caesar!, but I'm not sure if it's meant as a love letter or a poison pen letter to classic Hollywood.  Hail, Caesar! likes to think it's funny, and there are a couple of good spots that make it better than some of the films of this, the anti-1939.  However, truth be told you can skip it, particularly if you find the Coens less genius and more poseurs.

Eddie Mannix (Josh Brolin) is an executive at Capital Studios who is also a 'fixer', someone who takes care of problems the studio's stars get into.  He also oversees several productions ranging from aquatic musicals to sophisticated dramas to B-Cowboy pictures.  At the top of the production list is the Biblical epic Hail, Caesar!: A Tale of the Christ (making me wonder where they got THAT subtitle from).  The film's star is Baird Whitlock (George Clooney), who is a thorough dolt.  Whitlock is the unwitting victim of a scheme.  A couple of extras drug him between takes and abduct him.

Mannix at first is not too concerned that his star has disappeared, suspecting he might be on a bender or shacked up with some woman or other.  He has more problems to contend with, such as whether religious figures brought in to look at the Hail, Caesar! script find anything objectionable.  The Catholic, Protestant, and Orthodox ministers don't find much to object to (though the Orthodox priest complains the idea of a charioteer jumping from one chariot to another in the middle of the race unbelievable).  The Rabbi for his part constantly complains that the script makes Jesus look like God...which he isn't, he keeps reminding them.

Mannix also has other productions to look into, such as Merrily We Dance, the latest prestige picture from European director Laurence Laurentz (Joseph Fiennes).  I'd like to point out that naming your uppity character "Laurence Laurentz" is what passes for 'sophisticated, witty humor' in Hail, Caesar! just so you know.  This A Place in the Sun-like production faces a major crisis when the New York office decides to put the Roy Rogers-type Hobie Doyle (Alden Ehrenreich) as their Montgomery Clift-type lead.  It's clear that this dolt, with his pronounced twang and general idiocy/naivete is not cut out for this production.  Over at the lavish aquatic musical film, the Esther Williams-like star DeAnna Moran (Scarlett Johansson), is as brash and coarse as they come, with her own Nuw Yawk accent.

She is also knocked up and unmarried, and she won't hear of a third weddin'.  To sort this out, they go to surety agent Joseph Silverman (Jonah Hill), to act as foster parent for her bastard until she is able to adopt her own child (no doubt the Coen Brothers were drawing from the life of Loretta Young, who also surreptitiously adopted her own daughter). 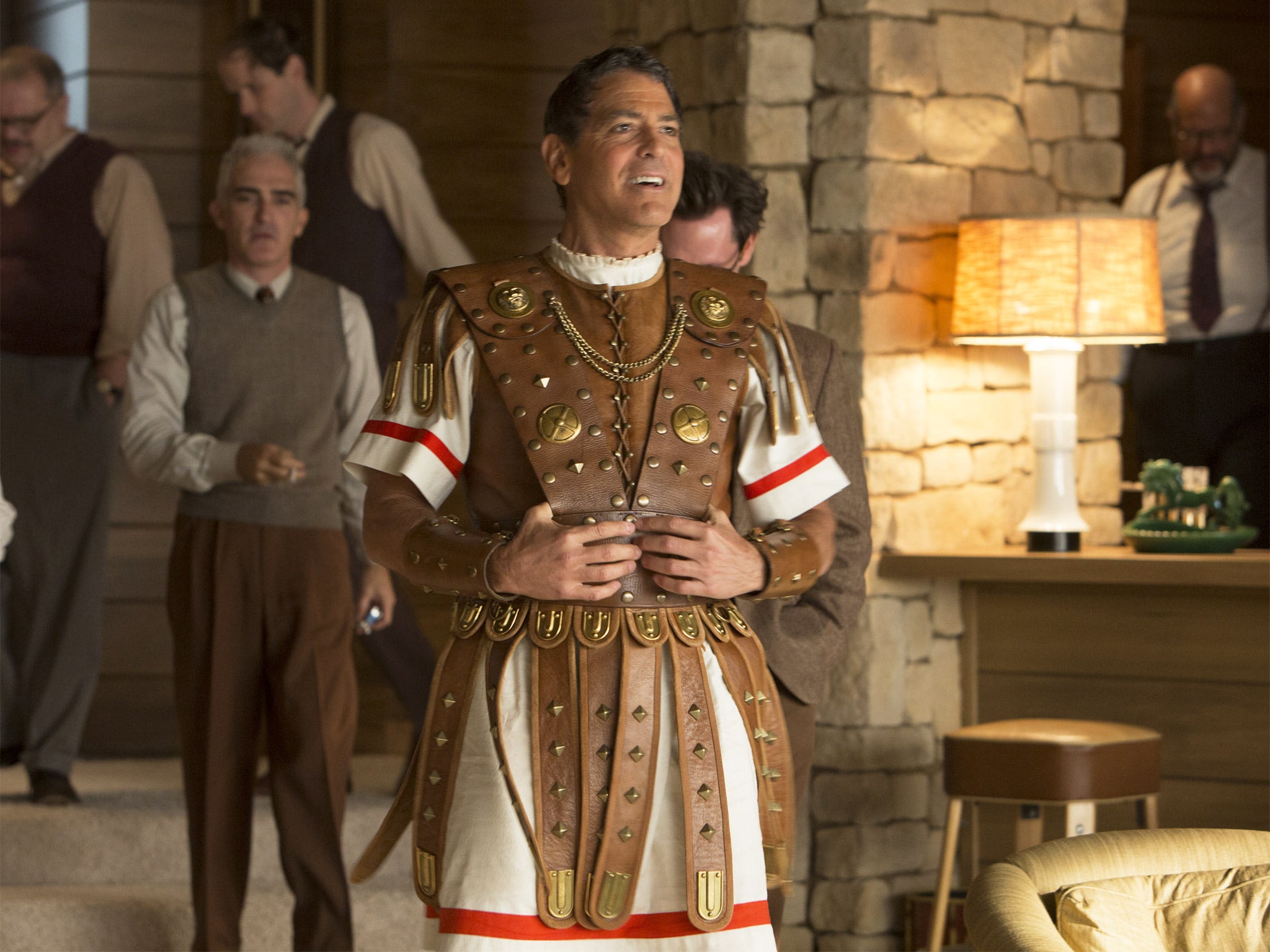 Meanwhile, Baird finds himself with a 'study group' made up of Hollywood writers.  It's soon clear that they are all Communists (who have even by their own admission snuck in pro-Soviet propaganda into their films.  Where's Joe McCarthy when you need him!).  Within the day this group informs Baird that not only have they kidnapped him, with their name being "The Future", but have managed to make the dimwitted star a convert to the Red Cause.

Mannix by now is worried, especially with twin gossip columnists Thora and Thessaly Thacker (Tilda Swinton) hot on his heels.  The bitter Louella Parsons/Hedda Hopper types want an exclusive or either or both will reveal Baird Whitlock's great secret that involves...ON WINGS AS EAGLES!  Mannix also has an offer for a job at Lockheed to think over along with the fact that there is a ransom for Whitlock.

At another set, the Gene Kelly-like Burt Gurney (ex-stripper Channing Tatum) is doing a surprisingly risqué number, No Dames!, which frankly suggests that women and seamen don't mix (yes, I used that line before, but it's too good to pass up).  The ransom is left on that set, but it isn't until Hobie is on a date with the Carmen Miranda-type Carlotta Valdez (Veronica Osorio) that Hobie realizes who took the cash.

Burt Gurney is the Leader of The Future!  Hobie manages to get to Gurney's seaside home, where a clearly stupid Whitlock asks if the singing cowboy is a Communist too (Whitlock clearly not understand what Communism actually is).  Gurney has his Hollywood Twenty sail him to the secret sub, where in his eagerness to save his dog Engels, he drops the cash.  Hobie spirits Baird off before the police arrive, and the next day, as Baird starts spouting off Commie propaganda as if he knew what he was talking about, Mannix starts slapping him about, telling him that the studio has been good to him and to everyone else, so drop the I Heart Stalin bit.

Eddie Mannix decides to stay in this crazy business.

I figure that Joel and Ethan Coen thought audiences would be rolling on the floor laughing at their brilliance.  They might have been laughing, but I argue it was more at them than with them, specifically at their pretentions of high intellect.

Now, it isn't as if I don't get what the Coens were going for (a romp through the world of 1950s moviemaking, particularly with the at times exaggerated mannerisms of certain genres).  It's in the fact that much of Hail, Caesar! isn't funny at all.

Now, I'm the first to say that there were some amusing bits, and all those courtesy of the future Han Solo, Alden Ehrenreich.  His Hobie could have come across as a total idiot, but Ehrenreich makes him more a sincere albeit dim character.  When he shows up at the Merrily We Dance set, he knows he is clearly out of his league, but being the trooper that he is, does his best to follow Laurentz's direction.

This involves a clever (but not laugh-out-loud-funny) bit where Hobie attempts to say the rather posh lines exactly like Laurentz, down to Laurentz's accent, which makes Hobie's efforts to sound as posh as Laurentz all the more amusing.   We see Hobie's intelligence when it is he, simpleton that he is suppose to be, advise Mannix to look at the extras working on Hail, Caesar! for clues as to who kidnapped Baird, saying that extras are rarely noticed.

Ehrenreich also shines when he's at his film, taking the reception to his Lazy Ol' Moon song with good spirits even if it was turned from a sincere love ballad into a bit of a comic relief scene which he didn't intend.

As a side note, I would not object if either No Dames! or Lazy Ol' Moon found themselves in contention for Best Original Song Oscars (as well as Ehrenreich as Best Supporting Actor).


I don't fault Brolin for doing a good job here either.  His quick deliver was in the style of a screwball comedy, though the particulars that he has to face (save for the abduction) don't seem particularly interesting.  Clooney can do his himbo bit in his sleep. Johansson is wasted as the Esther Williams-meets-Jean Harlow broad.  Her whole storyline could have been cut without it impeding the story.

Same goes for the ex-stripper.  Granted, Tatum can move (as I'm sure he's proven before).  However, how would we get an indication that he was the Red Menace since I think he was in just that one scene (which was I figure an homage to On the Town).  I wonder if the Coens just picked him to be the Useful Idiot because he was there and couldn't palm it off on someone else.

Over and over in Hail, Caesar!, things appear only to have nothing to do with the overall story (the Esther Williams bit, Mannix's struggle over to stay or go).  The whole 'scandal' over On Wings As Eagles that we learn about at the very end of the movie (that Whitlock allegedly got his big break in this movie by performing sodomy with Laurence Laurentz) just appears out of nowhere.  Given that throughout Hail, Caesar!, Whitlock's rampant womanizing is suspected at first to be the reason for his disappearance, one wonders where this bit came from.
You throw something at the audience which the audience has no evidence or clue to, so how do you expect them to react with either shock or amusement at something they've been given no information about?  That also applies with Burt being the Communist (though to be fair, Gene Kelly was a very liberal person, even by Hollywood standards).

Moreover, the entire verbal spat between Christians and Jews seems to come from another world altogether.  It isn't funny (though it's trying to be), and no Jew I know would go into fits over the Christian concept of Jesus being God.  I think the Jewish community is fully aware where Gentiles stand on Jesus.  I've even seen a rabbi and a priest discuss the original Ben-Hur on TCM without any of the idiotic hostility the Hail, Caesar! rabbi expresses. Despite what the Coen Brothers may say or think, Jews are nowhere near that hostile to the idea of Christ.

The comedy save for Ehrenreich comes across as forced, unnatural, and unfunny (making the gossip columnists twins wasn't funny at all, but bless Tilda Swinton for trying).  For a comedy, the film is a flop.

Finally, let me say how I hate voice-over (provided by Michael Gambon, Dumbledore Number 2).  It doesn't work here and is so distracting.

I was impressed by Alden Ehrenreich (to where I think he might pull off The Adventures of Young Han Solo).  A couple of the musical numbers were good.  Apart from that, the Coen Brothers continue to show how they are still a very acquired taste.  Still, given just how lousy 2016 in general has been, Hail, Caesar! actually looks good...and I feel bad.