The 1950s are cluttered with odd choices for the Academy of Motion Picture Arts & Sciences' Best Picture.  In 1956 when the battle was between the Biblical epic The Ten Commandments and that sprawling tale of Texas known as Giant, the winner was a film whose whole purpose was to be as big, loud, and bombastic as its producer, Mike Todd: Around the World in 80 Days.  1951 saw two searing dramas, George Stevens' A Place in the Sun and Elia Kazan's A Streetcar Named Desire, go down in flames to the sweet, charming, inoffensive yet to my mind unimpressive An American in Paris, whose status as a classic still puzzles me.

1952 was no exception.  There was the Irish-set comedy The Quiet Man and the politically charged Western High Noon fighting it out.  When Mary Pickford read the winner, there were gasps in the audience mingled with shock as the Cecil B. De Mille circus epic The Greatest Show on Earth took the prize.  Now, I liked The Greatest Show on Earth but would not have voted for it.  However, right now I'm going to focus on yet another nominee that found itself in contention for Best Picture, and that is Ivanhoe, the adaptation of the Sir Walter Scott poem.   As it stands, Ivanhoe is perhaps the nuttiest choice out of the five nominated films, and given that the much-derided Greatest Show on Earth won, that's saying a lot.

England in the time of the Crusades.  With Richard I out of the country, England is in the grips of tyranny.  Sir Wilfred of Ivanhoe (Robert Taylor) remains loyal to The Lionheart, but he cannot get the wicked Prince John to pay the ransom for Richard's release.  Returning to England, he goes to his father Cedric (Finlay Currie), but Cedric, a Saxon, refuses to help a Norman.  Ivanhoe is dejected and leaves with only Wamba the Fool (Emlyn Williams), who pledges to be his squire.  This also means leaving his great love, the Lady Rowena (Joan Fontaine).

Cedric isn't all bad though, since he allows Isaac of York (Felix Aylmer), who is a Jew, to take shelter at his estate.  He also welcomes two Norman knights: Sir Brian (George Sanders) and Sir Hugh (Robert Douglas), who later try to rob the Jew.  Ivanhoe, who has no prejudices against the Children of Israel, saves him and escorts him safely to his home.

Isaac feels Ivanhoe is a man to be trusted, and agrees to help raise through his fellow Jews part of Richard's ransom in exchange for getting help from Richard in allowing greater freedom to England's Jews.  Isaac's daughter Rebekah (Elizabeth Taylor) comes in secret to thank Ivanhoe for helping her father and her people, giving him jewels to which to purchase a horse and weapons to fight a joust.

Now we come to the joust, where Ivanhoe, a Saxon in disguise, challenges five Norman knights to duel.  He defeats four of them, but is injured in the last battle.  Ivanhoe presents his colors to the Jewess Rebekah, and Sir Brian falls instantly in love with her, setting up a love parallelogram for she has fallen in love with Ivanhoe, who is still in love with Rowena, who is in love with Ivanhoe.

Getting rather complicated, isn't it?

Sir Wilfred is almost defeated by Sir Brian, but fortunately is spirited away to take shelter with Sir Robin of Locksley (Harold Warrender).  Ivanhoe learns that his father and the Jews have been taken prisoner, and despite giving himself up Cedric is still not released.  A raid on the castle leaves many dead (including Wamba the Fool), and Sir Brian manages to flee by using Rebekah as a human shield.

Prince John will not be denied the throne.  Rebekah is now held for ransom, but the Jews of England opt to use their part of the ransom to pay for Richard's release.  She is set to be burned as a witch, but Ivanhoe comes and demands a duel to save her.  Sir Brian, who has genuinely fallen in love with Jewess, offers to essentially take a dive for her, but she declines.  In the final battle, Sir Brian is fatally injured and Rebekah realizes he did love her, and that Ivanhoe loves Rowena.  The two women dueling it out for Ivanhoe make peace, and Ivanhoe takes his group to pay the ransom and more importantly dethrone John the Usurper from power. 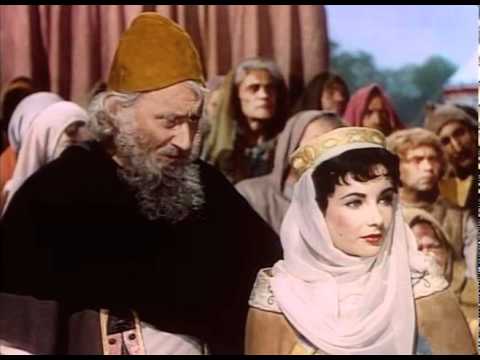 I could never shake the sense that everyone involved in Ivanhoe knows the silliness of the whole project and played it as such.  My first indication of this is based on the acting in Ivanhoe, which is so theatrical and over-the-top.  I cannot remember a film as badly acted by everyone as Ivanhoe.  We have several good actors in this (Fontaine, the two Taylors, Sanders), so it cannot be that they all went bad all at once.

I think it was that director Richard Thorpe (mercifully NOT nominated for Best Director) was interested in the spectacle, the costumes, the art design, than he was in the performers.  I was simply amazed at how unnatural and/or theatrical everyone was, to where one could not be blamed if they thought they were seeing mannequins come to life and still trying to figure out what to say.

Granted, some of Ivanhoe's dialogue was laughable or cringe-inducing.  You had such clunkers as "Do you infidels never show your feelings?"

As a side note, I was disappointed that the serious, possibly positive step in addressing anti-Semitism in a period piece was rather wasted.  It served more as backdrop than a serious effort to make a commentary on the evils of bigotry.

I wish I had noted who said what in this exchange, but I found it almost hilarious.

"Do you think I go to her aid because I love her?"
"I shall know that when I know where pity ends and love begins".

In other matters, Ivanhoe falls flat.  What is suppose to be an epic battle at the castle looks boring, to where I suspect the crew was throwing the arrows at the actors.  Miklos Rozsa's music, usually a hallmark that can lift anything, can't save the scene thanks to lousy staging and inept directing.

Ivanhoe was extremely popular when it premiered (I think the second biggest box-office hit, after The Greatest Show on Earth).  Perhaps this is why both were nominated while Singin' in the Rain was left off.  However, Ivanhoe is not remembered now, and it has not aged well.  In fact, sometimes it is almost sad to see good people trying so hard to do good and only making such a mess of it.  Ultimately, when I think that Ivanhoe received a Best Picture nomination over Singin' in the Rain, it just makes you want to slap the Academy a few times and say, "Just how drunk WERE you when you filled out your ballots?"