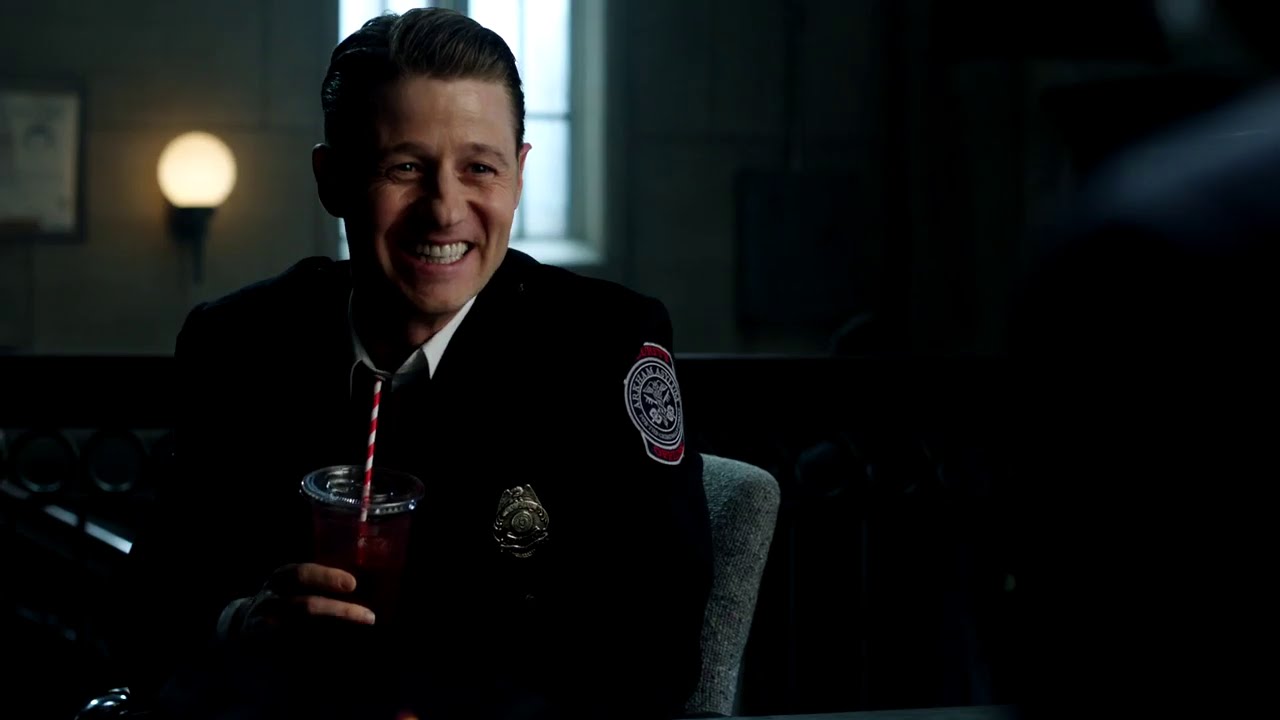 I almost want to knock Transference, the Gotham Season Two finale, down more because of a particular plot point that struck me as downright silly.  If I gave it much more thought, I'd say it was almost laughable.  However, so much of Transference was just so good, and packed so much within its running time, that this major slice of idiocy is forgiven.

Picking up from A Legion of Horribles, the GCPD is about to storm Arkham Asylum to rescue former Detective Jim Gordon (Ben McKenzie), Bruce Wayne (David Mazouz), Lucius Fox (Chris Chalk)...and maybe street urchin Selina Kyle (Camren Bicondova).  I cannot remember if the GCPD is aware of the last three, but I'm sure Gordon would tell them if they didn't.  Of course, that's not what happens, as Gordon appears to come out and tell them everything's all right.

Naturally, this isn't the real Jim Gordon.  It's Basil, the product of mad scientist Hugo Strange (B.D. Wong), who has taken on Gordon's appearance.  Despite having a more raspy voice, different mannerisms, and if I'm not mistaken, even being slightly taller he is welcomed into the GCPD, insisting that Strange is clean.  While his partner/friend Harvey Bullock (Donal Logue) senses there's something a bit peculiar with Jim, he still thinks it's him.  So does Alfred Pennyworth (Sean Pertwee), who is downright puzzled as to why Gordon doesn't appear to be interested in young Master Bruce's whereabouts.

Master Bruce and Lucius are playing a deadly question-and-answer game with Edward Nygma (Cory Michael Smith), who is taunting them with his questions.  When asked 'who controls Wayne Enterprises?', their answer of 'the Board' is incorrect, and the future Riddler appears to poison them.

In reality, he merely knocks them out, and for all his trouble, gets locked up in his room again.  Wayne, Fox, and Gordon were drugged and questioned to see if they knew anything about 'the secret council', a 'court' if you will, that controls Gotham and has done so for many, many years.  They know nothing, so they will be left temporarily alive...until Strange is ordered to destroy Indian Hill, his secret lab with all his mad scientist experiments.

One of those experiments, the revived Fish Mooney (Jada Pinkett Smith), isn't about to go down without a fight.  She wants out, and uses her new-found power of controlling people with touch to get Ethel Peabody (Tonya Pinkins) to do her bidding.  Strange is both impressed and horrified by Mooney's new power, fully aware that should she get him, it's all over.  He manages to set the bomb that will blow the place sky-high, including his subjects. 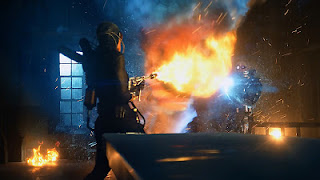 He still has uses for two of them: Mr. Freeze (Nathan Darrow) and Firefly (Michelle Veintimillia).  He wants them to kill all those still at Indian Hill, but Selina objects.  Strange orders Freeze to kill Selina, but Firefly protects her.  A real song of Ice and Fire commences, as the two begin to battle.  In the battle, Selina, who had found the three men and told by Bruce to escape, rescues them in an effort to save everyone.  There, Gordon tells Freeze and Firefly what is truly going on, and they turn their weapons against Strange.  Surprisingly, they don't kill him...merely have him spin around and around.

Meanwhile, The Penguin (Robin Lord Taylor) and Butch Gilzean (Drew Powell), along with Bonkers Babs herself, Barbara Kean (Erin Richards) are at Oswald's house, where upon learning of the chaos at Arkham, Pengy decides to take revenge on Strange.  Barbara was sent to the GCPD, where she of all people realizes that "Jim Gordon" isn't the real Jim Gordon (his dismissal of Lee Thompkins as 'a bitch' that he doesn't care about being the tip-off).  She slaps him hard...hard enough to have his face altered, just like clay.  Realizing what was obvious from the get-go, Bullock and Alfred realize they've been deceived and race to Arkham.

Strange would rather die and not face 'the court' than save the institution from exploding, and it's up to Gordon and Fox to stop the bomb, ordering Bruce and Selina to get out (I figure Firefly and Freeze got out too in the chaos, and perhaps Nygma, who was forced into helping Gordon and Fox get to the bomb.  There, the two don't know how to disarm the bomb until the reviving Peabody says, "water".  They literally throw water on the problem, only later realizing Peabody was asking for water, not suggesting it.  Bomb averted, Gordon decides to go find Lee, taking Bullock's car with him.

Meanwhile, Penguin and Butch decide to get revenge on Strange but instead encounter the bus that had taken flight from Arkham.  Both of them are absolutely stunned to find Fish Mooney there.  Mooney doesn't do much to either, merely touching Penguin and causing him to faint in total shock, while merely looking at her old friend and walking away.  Butch leaves, shocked, Penguin is left there, unconscious.  A homeless woman comes upon the bus and opens it to let those inside out, finding to her shock a whole slew of strange creatures, and ending with a long-haired Bruce Wayne doppelganger, who thanks her before leaving. Gotham received three Emmy nominations this year, one of them for Cinematography.  Transference shows why this nomination is well-earned (even if the nomination was for Azrael).  At a certain point during Gordon's interrogation by Strange, he injects the detective with 'honesty serum', and from Gordon's point-of-view, the entire sequence takes an eerie, hypnotic, and frightening turn, as if we'd wandered into a nightmare.  It's one of the most beautiful scenes in all of Gotham, and is not only a showcase for its cinematography but a wonderful example of how to use visuals to underscore a scene.

This same visual is used at the end with all the monsters (and future Batman villains) escape.  We see hints of things yet to be revealed, but at least now we might see how some of the odder figures in the Batman mythos came to be.

This, however, leads us to that one issue I had with Transference, and that was with the Clayface story.  I'm sure McKenzie relished the chance to play something other than the gruff Gordon, and to his credit he did his best to make the fake Gordon as distinct from the real Gordon as one could while plausibly fooling people into thinking he was the real deal. However, I kept wondering why neither Bullock or Alfred, two intelligent men, could not figure out what it took Barbara minutes to: that it was a false Gordon.  The fact that 'Gordon' was so unlike Gordon was so painfully obvious that I simply never accepted that Clayface's rouse would work.

I have to give McKenzie credit: not only did he have to play Clayface, but also a more vulnerable, weak, even regretful Gordon when under Strange's control.  He showed that pained, hurt, and guilt-ridden figure, and if anything, Transference is McKenzie's best moment on Gotham.

The same I'd say for Mazouz, who has grown so much as Bruce Wayne (figuratively and literally).  His Bruce is more mature and also starting to be more direct, more driven to right wrongs.  I can see how Mazouz' performance throughout the season shows him becoming the Batman we all know.

Kudos also to one of the absolute standouts on Gotham.  Though his role was small, RLT is simply brilliant as Oswald Cobblepot, The Penguin. Only an actor of his immense talent and range could make Penguin's mix of insanity and rationality believable.  He is clearly insane: he cut the head off the corpse of the stepmother who tortured him and used it as a decorative piece.  He is clearly rational: he has a plan to take revenge on Strange for torturing him.  RLT is such a knockout that I am willing to go on record to say he is the best version of The Penguin yet committed to film.

I also think the same of Darrow's Victor Fries.  Please, please, PLEASE bring him back for another guest turn as Mr. Freeze, and give him a more expanded role.  Like RLT, I think Darrow is the best version of Mr. Freeze that has been.

As a side note, while I think the world of CMS as Edward Nygma, I think Frank Gorshin is still the best Riddler (though Smith is a very, very close second).  Same for the future Catwoman: while Michelle Pfeiffer is still THE Catwoman of all Catwomen, Bicondova is doing such a fantastic job she is coming close to her in terms of doing great things with the character.

The episode did leave the door open for Fish Mooney to return, and I know many are displeased by that prospect.  I'm not appalled by it, but I'm not cheering for her to wreak havoc on poor Pengy.  He's suffered enough.  Smith was as camp as ever, and that's just how Fish Mooney is.  In the final analysis, I won't object to her popping up, but if she shows up more than Mr. Freeze, then and only then will I be mad.

Transference did a solid job of setting things up for Season Three. There were things that didn't work (the Clayface scenario, Strange not being outright killed by the combo of Freeze/Firefly, the bomb disposal), but we now get a mysterious Bruce Wayne version, the future Court of Owls, and perhaps Dr. Thompkins' return.  While by no means perfect, Transference did enough right to have us overcome what it didn't.