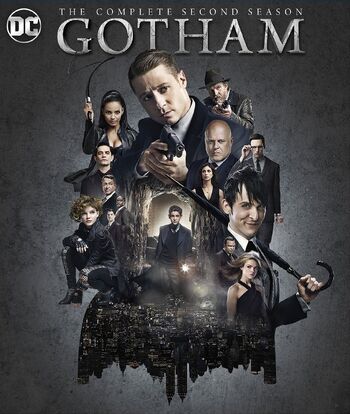 We now have a chance to look over Season Two of Gotham, the Batman prequel centered on the future Commissioner Gordon, mentor to Bruce Wayne, frenemy to Batman.  Season Two is leaps and bounds over a good but not great Season One.  It is sharper, more focused, with one or two continuing stories rather than trying to be Law & Order: Gotham.  Gotham Season Two, divided into two halves: Rise of the Villains and Wrath of the Villains, kept things flowing in their overall story arcs.  We also got to see new villains given new life with fantastic performances, established villains rising to new heights, and the eventual heroes of Gotham City developing into their future selves.

In short, from my perspective, Gotham got more right than wrong this year, which bodes well for next year.  There are still issues I have with Gotham, some quite serious, which I will address.

I was surprised that three episodes scored a perfect 10/10, and a further ten scored 9/10. The season never went below a 7/10, a remarkable feat given that last season there were some that scored a 5/10.  The overall average was a surprising 9/10.  It's surprising to me given how hard I sometimes am to please. However, Gotham Season Two had so much good within it, so much that really elevated it.  At the top of my list are some of the new villains, and at the top of that list is Nathan Darrow as Victor Fries, better known as Mr. Freeze.  Mr. Freeze had had great harm done to him after Arnold's horrendous turn in Batman & Robin, and the character became an object of ridicule.  Gotham's scripts and Darrow's acting not just redeemed him, but took him away from the camp nature of both Arnold and the Batman TV show with the trio of George Sanders, Eli Wallach, and Otto Preminger.

I come at this with no knowledge of Darrow as an actor (I haven't seen any episode of House of Cards.  I've seen the British version, but not the American one).  Gotham's origin story for Freeze doesn't venture into new territory. In fact, it sticks close to the one we know (even in Batman & Robin).  However, Darrow made his descent from decent scientist to vengeful lackey and super-villain believable, even tragic.  I was simply thrilled with what Nathan Darrow did with the role: playing such an out-there character and making it seem plausible, almost making me like him is no small accomplishment.

I figure Darrow has a heavy schedule with both House of Cards and other projects, but I am very happy that there is still wiggle room for him to return for another guest appearance.  He simply has to come back, because, like Robin Lord Taylor's version of The Penguin, Nathan Darrow is the BEST version of Mr. Freeze we've ever had.

As a side note, while I deeply admire and respect Cory Michael Smith as Edward Nygma aka The Riddler, Frank Gorshin is still the best version of that character.

At this point, let's address an issue that plagues Gotham: the age issue.  Darrow is old enough to be the father of Bruce Wayne (David Mazouz), and here again we have the problem of perhaps having too wide an age gap for when Batman and Freeze meet in battle.  Right now I wouldn't accept the idea that such an age gap (Darrow's 40 to Mazouz's 15) is a deal-breaker.  However, the age gap between Darrow and Mazouz's of 25 years is I think the largest of any future Batman villain to Batman himself to date.

We already have some curious age gaps between future villains and the current Bruce Wayne.  Smith is actually the youngest of the current villains not near Mazouz's actual age, a mere 29 years old (meaning that his 14-year-gap makes it almost impossible for him to be old enough to be Mazouz's father).  The 23-year age gap between Mazouz and 38-year-old Taylor is more difficult to paper over, and even the youthful-looking Nicholas D'Agosto could be Mazouz's father, with an age gap of 21 years (the future Two-Face is 36). 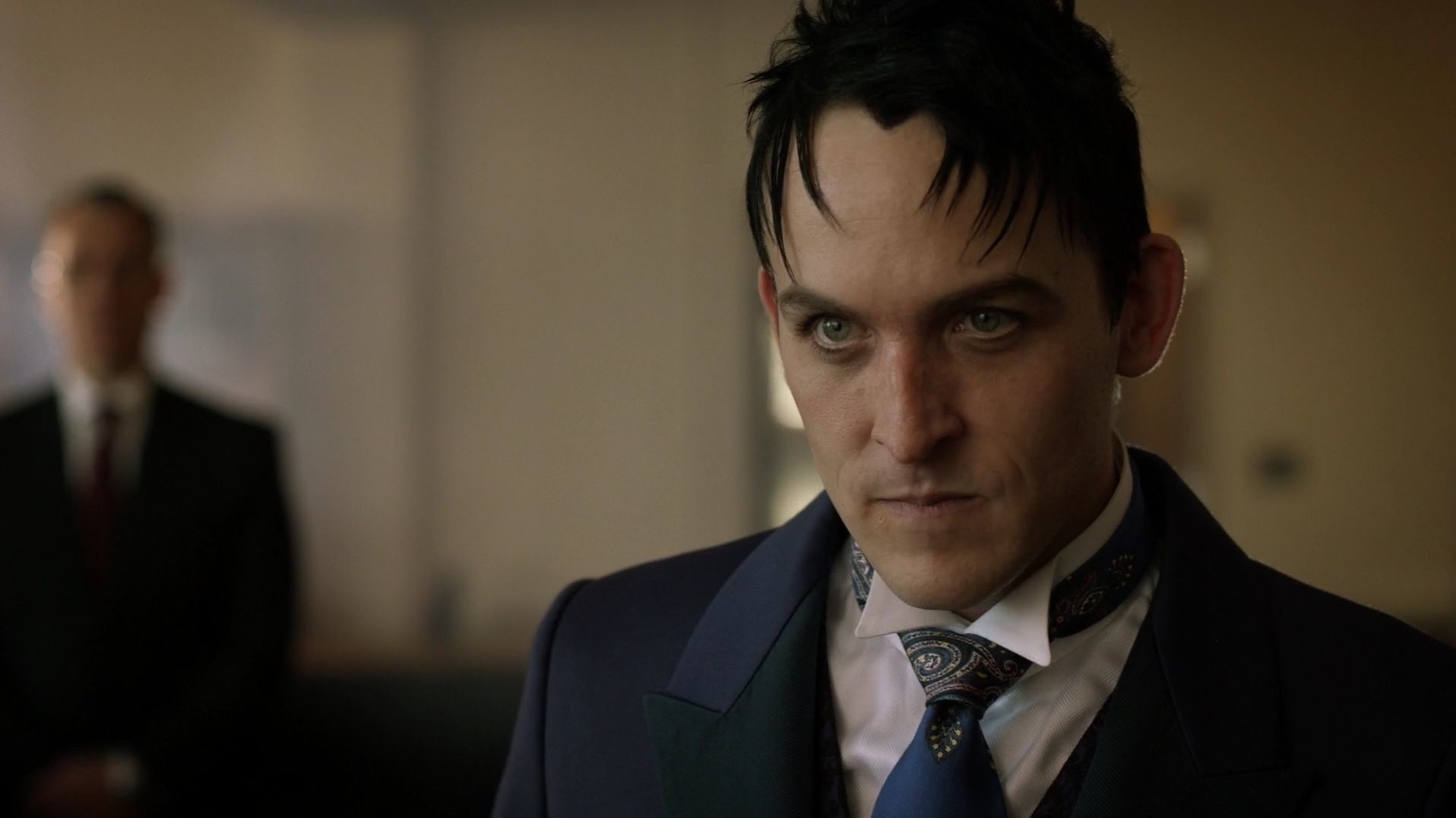 Will this be a problem?  Not if we don't think on it.  RLT is such a brilliant Penguin that I simply don't care that he will be 48 when Bruce Wayne is 25.  They could still battle each other.  Again, when I think what RLT has done in the role, I cannot reject him merely because he's of a certain age.

Another great performance is that of Michelle Veintimillia as Firefly.  Her backstory is tragic and quite scary, but she has done wonders with making her sympathetic, even when she goes full-on bonkers.  Two people who aren't sympathetic are James Frain as Theo Galavan and B.D. Wong as mad scientist Dr. Hugo Strange.  Yet they too were so good in their roles.  Part of me feels for Frain, for as good as he is playing villains (Gotham, The Tudors, The Cape...the last sadly not well-remembered), part of me wonders if he wouldn't like the chance to be in a comedy.  I give him credit: the whole Galavan/Azrael plotline was pretty bonkers, but the fact he managed to sell it as real is a mark of a good actor.

I've mentioned how the guest stars were great.  Let's turn to the main cast.  Oh, how I love Robin Lord Taylor as Oswald Cobblepot.  I wouldn't mind seeing a whole series around him (spinoff, spinoff).  He makes Pengy such a tragic figure, and no surprise: this season he's lost both his beloved mother AND newly discovered father, went to Arkham, tried to be good, and was driven to murderous insanity by the cruelty of others.  Whether he's raging or meek, RLT never fails to give the best performances in Gotham.  Pity the Television Academy stubbornly refuses to recognize just how good he is. Another standout is Mazouz as Bruce Wayne.  He's grown so much from the scared boy who didn't play a large role on Gotham to being a more integral part of the show.  Perhaps the writers should stop making him the rich boy in distress (he's been held hostage at least twice, and so far someone's tried to kill him three times at last count.  If I were him, I'd never leave Wayne Manor).   How many times can you try to kill off the character you know will not be killed before the series finale?

Still, again Gotham actually makes you wonder how he will survive, and the attempts on his life have been nerve-wracking.  I will admit that hearing the future Riddler mock Wayne's penchant for sweaters (calling him "Turtleneck" at one point) did please me, for I too wondered about Wayne's odd fixation with this particular style of wardrobe.

You look across the board: Camren Bicondova's growth as the anti-heroine Selina Kyle, Donal Logue's simply fantastic work as the more shady than downright repulsive Harvey Bullock, and Ben McKenzie's development of Jim Gordon as more morally questionable than the incessantly upright figure from Season One.  Even Erin Richards, widely detested for her WASP Barbara Kean, grew to sheer excellence as Stabby Babs, or as I like to call her, Bonkers Babs: Psycho Killer.  It's as if making her crazy unleashed the actress within.

While there is much in Gotham I do like, there is still one thing that highly troubles me: the violence on the show.  Gotham seems to indulge in some rather brutal visual killings.  I've seen two characters blown up, literally blown up, the first one being so shocking I kept rewinding it to make sure I saw what I saw.  We've also had some brutal stabbings, a man's hand severed, mass shootings at the GCPD headquarters (if this had been on the schedule around the time of Dallas, there would be no way it would have been broadcast), a group of teenagers nearly burned alive, another man's neck snapped to where his face was turned around, and the suggestion of cannibalism.

Season One was violent, but Season Two seems to have gone further in the visuals.  I can accept that if I thought this show was aimed at just adults.  However, I know kids are watching Gotham because of the Batman connection, and despite the viewer discretion warning, I know most parents aren't going to be particularly watchful.  We are talking about parents who have no problem taking their kids to see Deadpool or Insidious rather than hire a sitter for a few hours. Yes, it is the parent's responsibility to monitor what is acceptable/not acceptable for their kids, and if I had children, I would not let any of them under 16 watch Gotham, Batman or no Batman.  However, the reliance on being as graphic as network television allows, perhaps more than it normally would, still troubles me.

I think there is a difference between acknowledging the excellence on Gotham in terms of acting and scripts and being distressed by the sometimes very graphic depiction of violence on Gotham.  I appreciate the quality of the show (particularly its Emmy-nominated cinematography), but I do despair that they are heading in a very dangerous direction when it comes to the visual depictions of violence, sometimes quite gory for me who is in his 30s.

It is up to the individual to decide what he/she wants to watch, but I am of the firm belief that the violence on Gotham is simply unacceptable to anyone who is in elementary to middle school.

I admire much in Gotham, and Season Two was excellent.  The focus on one or two main stories with subplots developing around them was a sharp, smart decision.  The acting is among the best around on a comic book-based series.  If only for the violence, which still sometimes horrifies me...

Still, on the whole I am very satisfied with how Gotham is developing, and I hope that Season Three continue building on that, especially now with the Court of Owls lurking around the corner.

Oh, and yes: BRING BACK NATHAN DARROW AS MR. FREEZE!