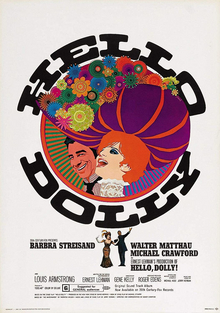 Contrary to what one might think, Hello, Dolly! is not a musical about former First Lady Dolley Madison (though I'd love to see one).  It is instead the film adaptation of a highly successful musical at a time when Broadway productions were transformed into big, lavish film musicals that somehow failed to translate well.  This is not always the case: film adaptations of The Sound of Music, West Side Story, Funny Girl and My Fair Lady are highly efficient and brilliant translations where whatever changes between stage and screen that only upset purists.  Then again, those films had master filmmakers behind them, craftsmen who knew how to put film together.

Hello, Dolly! on the other hand, had Gene Kelly, a man who was a true genius but who may have been the wrong person to direct such a mammoth production with no one co-directing with him.  That Kelly was given something as massive as Hello, Dolly! to make was one of the bad decisions that brought what could have been a delightful romp (which I figure the original Broadway show was) into perhaps the musical adaptation that finally brought down the movie musical as a genre.  Hello, Dolly! is not a terrible film, but it could have been a good one.

Dolly Levi (Barbra Streisand) can match anyone, and now she has her eyes on a 'half-millionaire'.  That would be Horace Vandergelder (Walter Matthau), who is generally crabby and uninterested in marriage, except perhaps for Irene Molloy (Marianne McAndrew), a milliner whom he contemplates a merger.  Dolly had arranged for Irene and Horace to get together, but now she wants to prevent this.  Dolly, as shrewd a woman as ever there was, has come up with a great scheme.

First, she has to work secretly against Horace's wishes and get his niece Ermengarde (Joyce Ames) and 'painter' Ambrose (Tommy Tune) together.  Next, she has to get Horace's two befuddled and naïve employees Cornelius Hackl (Michael Crawford) and Barnaby Tucker (Danny Lockin) out to New York.  Circumstances help as she directs the two clerks to NYC to call on Irene's hat shop, where she and Irene's assistant Minnie Fay (E.J. Parker) can be wined and dined by the two penniless figures.

Now in New York City, Horace discovers his clerks at Irene's shop and promptly calls the impending engagement off (scandalized by seeing so much 'debauchery' going on).   However, Mrs. Levi tells them to go to the Harmonia Gardens, where all will be revealed and the various lovers (including Dolly and Horace) will get things all squared.  Horace again finds himself the stooge of everyone and storms out.

Back in Yonkers, Horace finds that he's only ended up isolating himself from everyone.  His niece, thoroughly in love with Ambrose, has left.  He's fired his two clerks, who come with their new girls to collect their pay and start their own rival shop...across from Vandergelder's.  Dolly too comes, and at long last, Horace recognizes that she is the woman for him.

"Forced happiness" is the phrase that came to mind while watching Hello, Dolly!  This is what I call the idea that this is suppose to be a jolly affair and that I'm suppose to be grinning from ear to ear about it all but that in reality nearly everyone involved is going through the motions.   Hello, Dolly! is supposed to be happy and jolly, with that Jerry Herman music coming at me, and everyone smiling, and people doing elaborate, jolly dancing (courtesy of Michael Kidd).

However, what came across for me was rather forced and unhappy, as if we couldn't figure that these were real people but yes, actors, going through a series of steps and under a stern taskmaster.  This isn't to put much into stories of on-set feuding and bitterness (though costars Matthau and Streisand had, shall we say, a difficult working relationship).  It's just that for me, Hello, Dolly! is TOO jolly, TOO eager to show how 'fun' everything is without actually being fun. 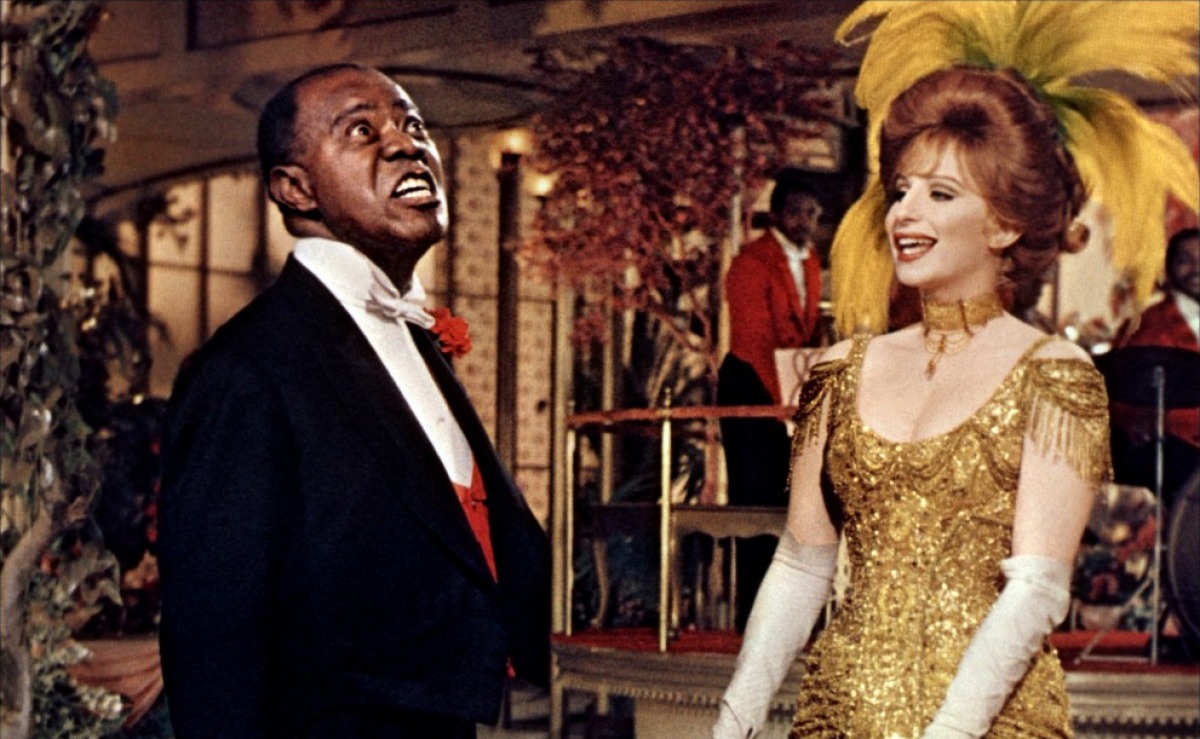 Again and again Kelly appears interested in how BIG he can make everything, how LARGE and MASSIVE it can be, that it drowns out nearly everything else (including what could and should have been wonderful, touching moments).  A BIG example is the title number.  Granted, Hello, Dolly! is one of the greatest numbers in Broadway history, a song so well-established in the American songbook that almost everyone knows at least part of it and can recognize it instantly.

However, the actual introduction seems to go on and on, with such grandiose choreography (and so overly-staged) that it didn't feel so much like a real movie and more like an out-of-control production that wanted to disguise how jumbled it was by throwing more and more and more and more at you.  Honestly, if an army of waiters with brooms came at me, I'd run away in terror from them, not sit passively by as another battalion stormed in, doing cartwheels with obviously fake food, came at me.

Everyone is excited that DOLLY IS BACK!, but given we never got a sense that the Harmonia was a special place for her, why the BIG, BIG, BIG buildup?  Even when we get to the actual Hello, Dolly! number, the whole thing seems forced, as if instead of being a real place, it were a massive movie set.

The only saving grace in that number was in bringing Louis Armstrong to join Babs in a duet of his version of Hello, Dolly!, a great part in a colossal production.  However, having him yell, "ONE MORE TIME!" made me yell, "NO, NO MORE!"

So much is left off, particularly with the Ambrose/Ermengarde subplot.  For all the importance of their story, they played almost no part IN the story.  If you'd cut them out altogether, and made the story about Cornelius/Barnaby and Dolly/Horace, it wouldn't have mattered one way or another.

Another problem with Hello, Dolly! is in the casting.  No slam against Streisand, whose voice is perfection.  However, at 27 she I think was far too young to be this worldly, world-weary, wise widow.  It's a great disservice that despite a previous Oscar nomination, MISS Carol Channing was not brought in to recreate her Broadway triumph.  Streisand did a good job, but sometimes she came across as less a shrewd manipulator than an unhinged chatterbox, constantly flaying about left right and center.

Making things more curious is the casting of Walter Matthau as the love interest.  I'm sure Mrs. Matthau loved him, but how many women's hearts are set aflutter by Walter Matthau?  His weak singing voice (especially compared to Streisand) makes things all the more perplexing.  Given their on-screen (and off-screen) hostility, one wonders how Horace Vandergelder could figure Dolly Levi is THE one to make him give up the bachelor life.

I figure Crawford and Lockin would have been better and stronger with a better and stronger director to guide them, but Kelly just wasn't either.  Still, they were quite a nice pair of simple guys who wanted nothing more than a kiss from girls.  Their female counterparts, McAndrew and Peaker, were dull and flat, so obviously acting that it didn't even warrant interest from them apparently.

Again and again everything felt forced and unnatural, focusing too much on how BIG-BIG-BIG the numbers could be than on whether they were interesting.

Again, there are positives.  Jerry Herman's music & lyrics remain top-notch, so much so that Hello, Dolly!, if remembered now, is due to Wall-E rather than for its own.  The music is great (even if perhaps unimaginatively delivered).

Sadly, there is a tragic coda to Hello, Dolly!  Eight years after its release, Danny Lockin, who played the young and naïve second clerk Barnaby Tucker, was brutally murdered, stabbed over 100 times by a man he'd met at a bar (who picked whom up is still confusing to me).  The brutality of the crime is already horrifying, but the fact that he was stabbed even after he was dead, that he was only 34 when he was murdered, and that his killer got a light sentence due to the inadmissibility of some evidence (and perhaps because as a gay/bisexual man, his murder wasn't that 'important') makes it all the more tragic and terrible.

Ultimately, Hello, Dolly! feels like a deranged anachronism, a big, overblown production when realism was forcing its way into Hollywood.  By no means as horrible as its reputation might be, Hello, Dolly! has more minuses than pluses.  It was the end of the big-budget musical extravaganza, and it makes one think that maybe it can be handled in small Wall-E size bites. 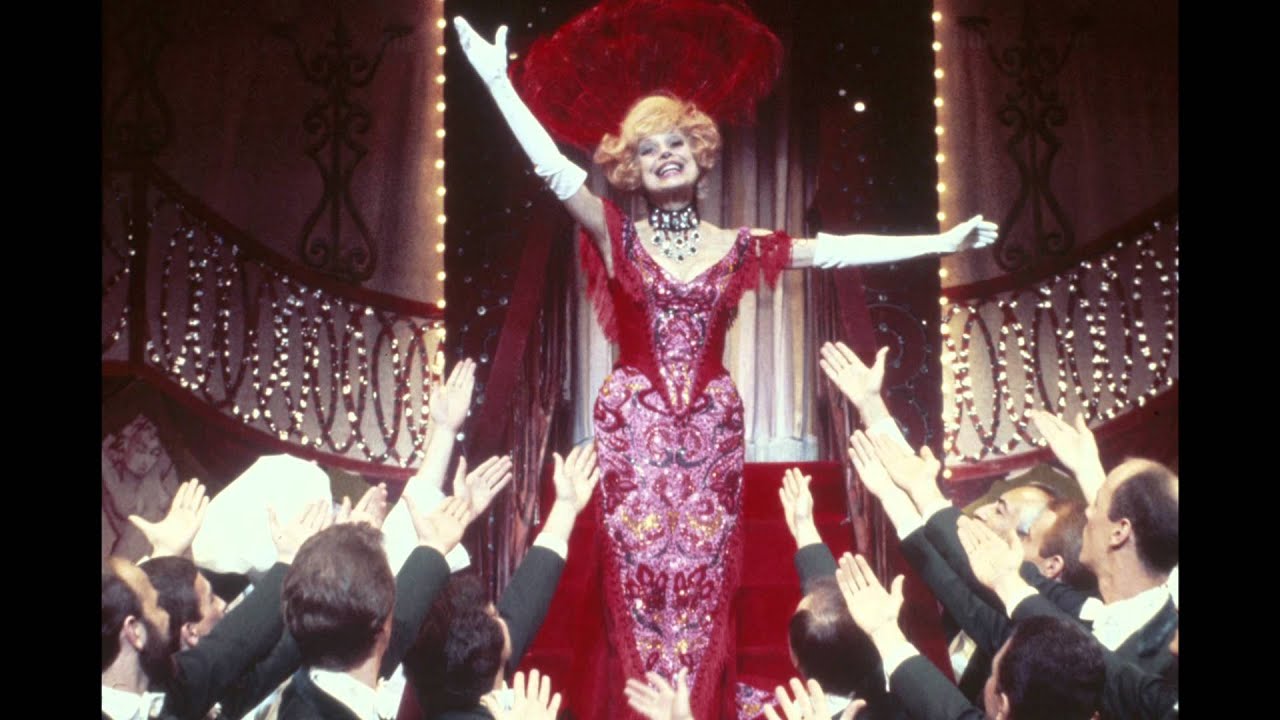