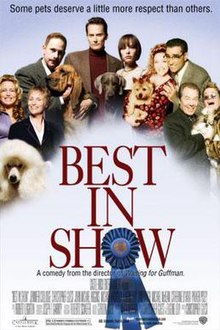 The entire aura around dog shows is a complete mystery to me.  I wouldn't know one breed of toy dogs from another.  In an odd way, Best in Show was a bit illuminating on the subject of animals and the humans who love them too much.  It is by no means vicious when it comes to the characters (I can't think of a Christopher Guest mockumentary that is), despite their own lunacy.  Best in Show is not a laugh-out-loud hilarious film (though there are times when you do laugh heartily).  Its humor is more droll, more dry, and its to its credit that we can laugh at the characters while simultaneously having a soft spot for them.

It is the Mayflower Kennel Club Dog Show in Philadelphia, and five disparate groups of people are coming.  From Florida, Gerry and Cookie Fleck (Eugene Levy and Catherine O'Hara), a nice middle-class couple who love each other but have a hard time thanks to Cookie's very wild past (no matter where they go, she ends up finding a former lover, much to Gerry's consternation).  The fact that Gerry has literally two left feet makes him all the more self-conscious.

From the South, there's fishing store owner Harlan Pepper (Guest), who takes great pride in being able to name all sorts of nuts and in his Bloodhound.  He's the only one not married.

Well, technically speaking, flamboyant gay couple Scott Donlan and Stefan Vanderhoof (John Michael Higgins and Michael McKean) aren't married either, but they too love their little dog and camp it up for all its worth.

We've got a highly neurotic yuppie couple, Meg and Hamilton Swann (Parker Posey and Michael Hitchcock), who are in turns excessively childish with their dog and with each other, bickering and going to therapy with their pooch. Each of them makes their way to Philly, where those with money get nice rooms, and those who don't (like the unfortunate Flecks, unaware their credit card had been cut off) are forced to stay in the utility closet of the hotel.  They go through the various mixers where they meet the competition, and start getting their breeds ready.  Observing all this is Mayflower Kennel Club President Dr. Theodore W. Millbank III (Bob Balaban) and at the hotel, the manager (Ed Begley, Jr.).  We also get play-by-play commentary from dog expert Trevor Beckwith (Jim Piddock) and Buck Laughlin (Fred Willard), with the latter sometimes wandering off into strange rabbit trails (such as asking a puzzled Beckwith to speculate how much Laughlin can bench press or whether the show could attract more people if the dogs came in costumes).

Things don't go well for the Swanns, who freak out when their dog's toy is lost, and the agitation from both of them causes their pet to bark at the judge (instant disqualification).  All the other owners find they move up from Best in Breed to competing against each other for Best in Show.  All sorts of actions go on, from Christy coming out in a big way (throwing herself into a passionate embrace with an equally willing Sherri Ann) to Cookie's last-minute injury that forces her untrained husband to walk their dog in the final round.

We end with Six Months Later, where Gerry and Cookie opt to record terrier-related songs (and guess who the record engineer is...one of Cookie's ex-lovers), Harlan pursues his dream to be a ventriloquist (and doing a mess of a job on it), Sherri Ann and Christy, now a couple, publishing their own lesbian-centric dog-breeding magazine (American Bitch), Stefan & Scott creating a calendar of dogs recreating classic scenes from movies), and Hamilton & Meg happier now with a new dog...one that doesn't mind if they have sex in front of it.

Best in Show is droll, less interested in ridiculing these curious characters and more in showing them in a warm light.  We can imagine that this group of people who really are passionate about their pets to where they don't see them as pets but as extensions of themselves.

We see that these people are not crazies (well, maybe the Swanns) but not all that different from us or our neighbors.  For them, their dogs are their passion, a hobby that didn't quite get out of hand but certainly takes up a great deal of their time.  Perhaps one doesn't end up feeling any sense of ridicule against them is because Best in Show doesn't set out to ridicule them.

Instead, like a true documentary that it mocks, Best in Show lets the characters display their curious worlds.  They themselves showcase what to outsiders might seem a bit, well, nuts, but the film never really thinks badly of them.

The performances, all based on adlibbing, are all quite excellent.  I was particularly impressed by Guest, whose Southern accent was believable without being exaggerated or ridiculous.  Each of the couples is portrayed in broad strokes, but they all did a commendable job painting realistic people.  Granted, Willard's oddball commentator is perhaps the least realistic person in Best of Show, but his curious comments are so funny you wouldn't have it any other way.  Moreover, Willard is a comedy icon and he can do anything he wants.

Given the film was made in 2000, it still is pretty amazing that Guest and co-scenarist Levy could get away with characters as campy and stereotypical as Stefan and Scott (the latter so outlandishly gay he wears makeup and dresses like a toreador at the finals).  One wonders if now, given that almost any mocking of homosexuality is seen as a crime, the film's gay couple seems pretty outrageous.

Still, part of me thinks gay couples will find the portrayal more amusing than insulting.

Now, Best in Show isn't a knockout in terms of comedy. A side trip to Akron for the Flecks to meet an old boyfriend, resulting in their beloved Winky being taken up to the roof, isn't that funny.  We also don't know exactly what happened to Sherri Ann's old (very old) husband.  Leaving apart that, Best in Show is a light, amusing little film about the bond between man and beast. 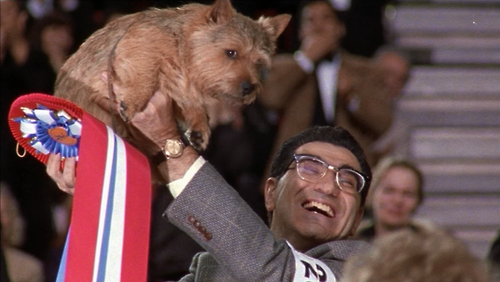