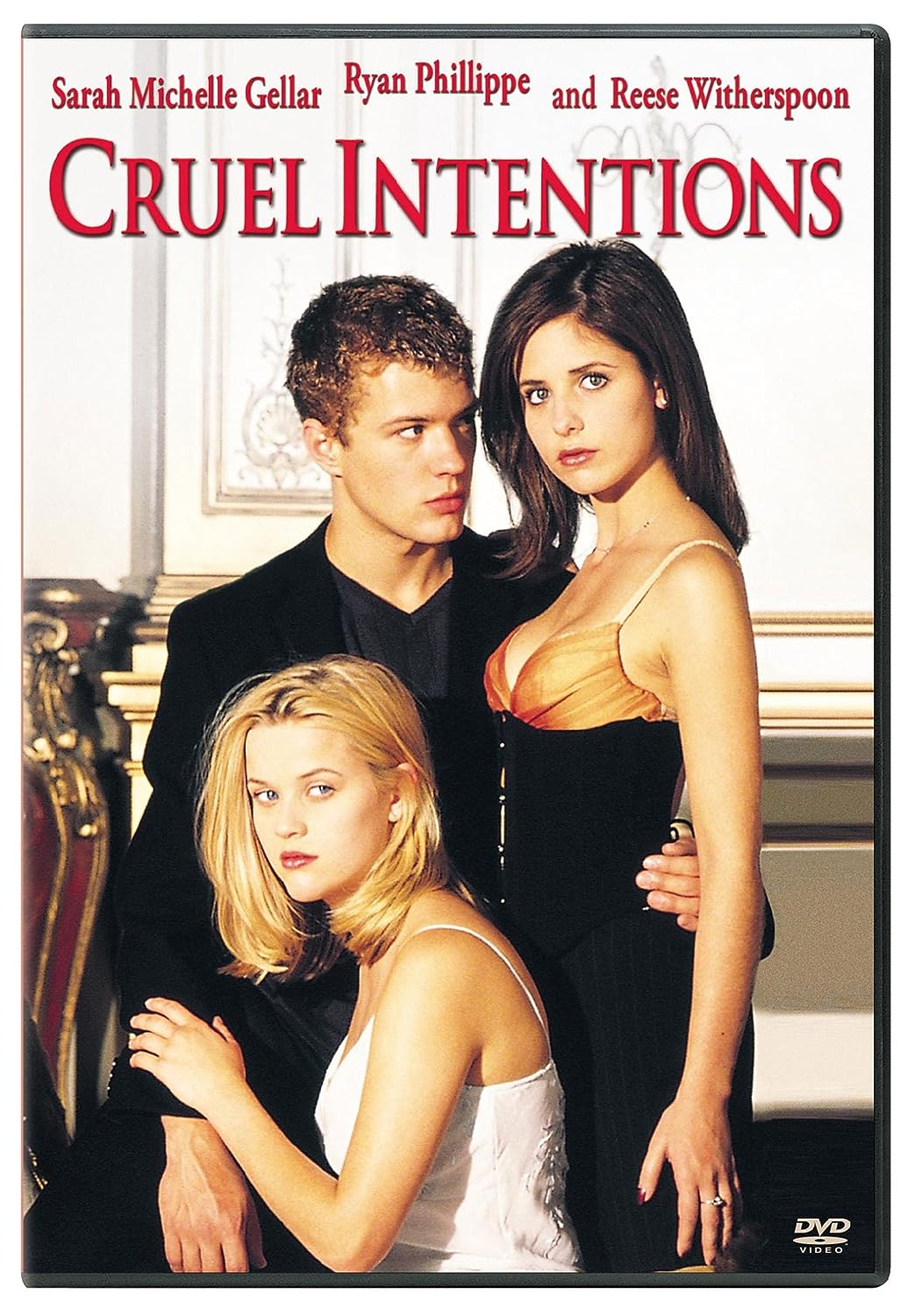 After watching the excellent Dangerous Liaisons, I was curious about the 'hip' version, one that exchanges those ancient regime frocks for Gucci.  Cruel Intentions is not a bad film.  It can be quite entertaining, even if it doesn't hit the same levels as its predecessor in terms of well, anything.  I figure that Cruel Intentions serves as a nice, albeit inferior, introduction to this sordid story of seduction and true love, but if it entertains, I cannot fault it for that.

Stepsiblings Kathryn Merteuil (Sarah Michelle Gellar) and Sebastian Valmont (Ryan Phillippe) are a pair of sexually ravenous beings.  It helps that their parents (for whom they have contempt for) are away on holiday.  Kathryn asks a favor of Sebastian: seduce Cecile Caldwell (Selma Blair), her naïve rival whom her ex-boyfriend dumped her for.  Sebastian finds such a request boring, for he has his eyes on a bigger prize.  It is Annette Hargrove (Reese Witherspoon), the new headmaster's daughter who penned a magazine article about remaining a virgin until marriage.  to successfully seduce a woman who proclaims the virtue of chastity would be his greatest conquest.

Kathryn scoffs that even the talents of Sebastian can best the virtuous Annette and offers a wager: if he fails she gets his prized car, but if he succeeds, he gets the bed Kathryn.  The bet is on.

As it happens, Annette is staying with Sebastian's Aunt Helen Rosemond (Louise Fletcher), and he begins working on charming Annette.  Annette, however, has been warned against Sebastian, and he is eager to find out who has squealed on him.  For that, he gets his openly gay friend Blaine (Joshua Jackson) to pump the information out of the only person Annette knows prior to her move to New York City, the closeted football star Greg (Eric Mabius), whom has made booty calls on Blaine.  A little blackmail later, Greg tells Sebastian that Annette's source is none other than Mrs. Caldwell (Christine Baranski), Cecile's mother.  Enraged, he agrees to help Kathryn ruin the dimwitted Cecile's reputation.

Kathryn hadn't been wasting time waiting for Sebastian, however.  She has been working to get Cecile to hook up with Ronald (Sean Patrick Thomas), her cello instructor.  It hasn't been easy given how clueless Cecile is, but soon love letters are exchanged between them.  Kathryn reveals the letters to Mrs. Caldwell, who promptly expels the black man from her house, then Kathryn and Sebastian offer to serve as intermediaries between the lovers.  Of course, this is the chance for Sebastian to deflower Cecile and for Kathryn to say it is a good way to train for Robert. 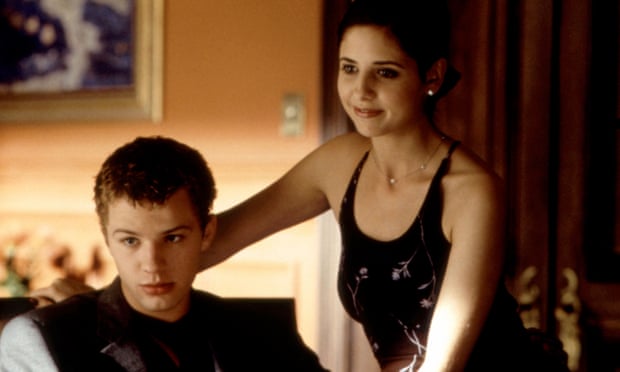 Meanwhile, a genuine friendship emerges between Sebastian and Annette, who begins to see Sebastian in a new light (no doubt helped by Greg being forced to feed her wrong information about him).  Sebastian launches a tirade against Annette, accusing her of hypocrisy: she tells people to wait for true love, then when true love comes, she denies it.  Annette then offers herself to Sebastian, but in a twist he is the one who declines sex. Sebastian has done what he has never done with anyone: he has fallen in love.

Annette leaves and Kathryn gloats about her 'victory', but by now Sebastian, too much in love to care, follows Annette, and they make love.  After this, when Kathryn offers herself as he has won the bet, something in Sebastian cannot bring himself to do so.  An enraged Kathryn threatens to ruin his reputation, and in a panic Sebastian ends his romance with a devastated Annette.

Sebastian comes calling back to Kathryn, but finds he's been duped and won't get his time in her bed.  She's also managed to seduce Ronald and fools him into thinking Sebastian raped and beat her.  Sebastian wanders about, begging to see Annette, who won't but who does accept the journal he's been keeping, one that details everything that has gone on...as well as the fact that he has indeed fallen in love and in a sense made love for the first time as opposed to just have sex.

Robert confronts Sebastian about the alleged abuse, and Annette comes across them both.  In the ensuing fight Annette is tossed into the street and nearly run down, but Sebastian pushes her out of the way and takes the full impact of the hit.  As he lays dying he confesses that Annette is the only woman he has ever truly loved and begs her forgiveness.  At his funeral, Kathryn continues her deceptions, until her classmates start handing out copies of Sebastian's secret journal...copies made by a more mature Cecile.  Kathryn's web of evil is exposed, and Annette drives off with the journal, named "Cruel Intentions", headed off to a new life somewhere.

As Cruel Intentions is geared toward teens, we had to make a few changes from the original French novel.  We had to introduce homosexuality, dry humping, and clueless parents.  You add a touch of racism among the elite world our characters live in, and what you have is good trashy fun.

I'm not going to advocate that Cruel Intentions is anywhere near the same league as Dangerous Liaisons, but in fairness the film has some good moments.  They are courtesy of the two best performances in Cruel Intentions: Selma Blair and Reese Witherspoon.  Blair made Cecile believable in her idiocy without being completely idiotic, more a naïve, unaware girl easily duped by everyone around her.  That makes her final scene, where she says nothing but gives Gellar a smirk that shows she has matured, all the more amusing.

Witherspoon is also strong  in the film, and it is possible to see how she is a sincere girl who could eventually fall for the philandering Sebastian, her virtue used against her.  She and Blair made me think that Annette and Cecile could be real (especially given since I've met people like them in real life).

I can't say the same with regards to Gellar and Phillippe.  I think Gellar relished the chance to play wicked to the core.  Whether she succeeded in mastering that 'bitch virtuosity' (to use the term Joseph L. Mankiewicz used to describe Eve Harrington in All About Eve) is a subject of debate.  I think Gellar was a little overt in her "look at me I'm being EVIL" bit, but there is something deliciously wicked in her performance, a touch camp without being wild about it.  In regards to Phillippe, I have never been convinced he's a particularly good actor, and I could never shake the idea that he was attempting to channel some of Malkovich in Dangerous Liaisons.

He wasn't particularly good in Cruel Intentions, but he's generally not that good in much, so I'm not going to belabor that point.

I do have some issues with Cruel Intentions.  First, one of the actors, Eric Mabius, who as the closeted jock Greg was cruelly miscast.  At 28, he was one of the oldest of the 'teens', and he looks far too old to be believable as a teenager.  Even stranger is that he is actually one year younger than Sean Patrick Thomas and a year older than Selma Blair, yet they didn't look as old to play teens as he did.  Every time I saw Mabius, I kept thinking 'he looks like he's a college senior, not a high school one', and it was pretty distracting.

Another part that didn't quite work was Greg's story.  His boy-toy Blaine was quickly introduced (with Jackson pretty much playing fey to let us know his character was gay) and then quickly disappears, never to be heard from again.  I don't know why Blaine was there (apart from being a plot device). As for Greg's last scene, he is seen tossing some CDs in a pique of frustration, going through each one.  As he goes through them, he comes across a Judy Garland CD and says to himself, "Judy...no, keep her", and whether it was meant to be funny or not to play up a gay stereotype I don't know.

Come to think of it, do teenagers today know that old stereotype of gay men's fascination with Garland?  Maybe if it had been Cher or Britney (if the latter were popular in 1999, I have no way of knowing).

It's also a bit of a shame that veteran actresses like Fletcher, Baranski, and Kurtz (the only Dangerous Liaisons star to appear in Cruel Intentions in a cameo as Sebastian's therapist who ends up humiliated by Sebastian) had little to do.  I won't begrudge that much since this is purely a teen (or teen-ish) show, and at least Baranski had some fun with Mrs. Caldwell's posh racism ("He so...black", she says astonished when Kathryn reveals Robert and Cecile's 'dangerous liaison', making it amusing).  She was better than Kurtz, who was awful in her one scene, either oozing insincerity or not caring a bit for the film and trying to just get through it.  Maybe her character was suppose to be thoroughly insincere, so I'll cut her some slack.

One thing I think Cruel Intentions is known for is its soundtrack, particularly the closing theme, Bitter Sweet Symphony, which works in a way.  It's not a bad soundtrack, though at times the film may be a bit more interested in what song to put in than in what is in the film itself.

On the whole I can see why Cruel Intentions is a bit of a cult film.  It has entertaining performances (good and bad) and it kept my interest.   As a diversion, it worked well, and every once in a while you need to have a bit of a romp.  Cruel Intentions is nothing more than a delectable, frothy film about the wickedness of sexual games among the elite teens of America, and I'm not going to bash it for doing what it set out to do.