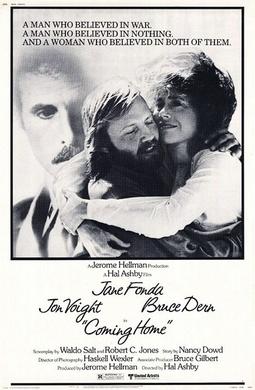 It was a war between two films in 1978.  Ten years after the Tet Offensive which was the beginning of the end of U.S. involvement in Vietnam, both The Deer Hunter and Coming Home dealt with pretty much the same theme: the aftereffects of the Vietnam War on the men who fought it and the women who loved them.   Coming Home couches its themes of the war's effects on ordinary people within a love story, but it doesn't take away from its strong acting and story of people caught up in struggles personal and military.

Military wife Sally Hyde (Jane Fonda) is about to be left alone while her husband, Captain Bob Hyde (Bruce Dern) goes off to Vietnam.  He's eager to go, and while she knows he has to, part of her feels adrift without him and with nothing to do.  She opts to be a volunteer at a military hospital to do her part for the war effort and to relive the boredom, and soon bonds with Vi (Penelope Milford) another volunteer engaged to another soldier.  To Sally's surprise, there is a wounded veteran she remembers from high school: Luke Martin (Jon Voight), once the star football player now a bitter, angry paraplegic.  He constantly lashes out at the world, showing only a touch of kindness to Vi's brother Billy (Robert Carradine), another patient whose wounds are more emotional than physical.

Soon Sally, the conservative and loyal wife of an officer, and Luke, the angry veteran, bond, though Sally won't contemplate an extramarital affair at first.  From her perspective, they are just friends, and soon, Sally's worldview begins to change, opening up to new ideas.  Bob for his part is finding Vietnam not a glory field but a horror, and Billy, unable to deal with his demons, commits suicide.  Luke, who has gained a measure of freedom and peace through his friendship with Sally, is now overwhelmed with rage and fury at the futility of it all and stages a one-man protest at the Marine Corps camp.

Sally and Luke have fallen in love, and despite herself, gives in once to the pleasures of the flesh with him.  Unbeknown to either, the FBI, concerned over Luke's antiwar activities, has been monitoring him, and that includes evidence of their tryst.  Sally, despite her one-time infidelity, won't leave her husband and both agree that they cannot be together.  Bob comes back, a haunted man already when he discovers the affair.  He at first threatens both of them, but Luke manages to calm him down, in part by telling him Sally will never leave Bob for anyone, let alone Luke.

Shortly after, Bob goes out to the beach, takes all his clothes off, and swims further and further out to sea.  Luke gives a powerful talk to high school students about the high cost of war.  Sally, unaware of either action by the men in her life, goes with Vi to the supermarket to pick up meat for a planned cookout, entering through the automated door marked "Lucky Out".

In many ways, Coming Home is exactly the type of film director Hal Ashby, I believe, set out to make.  It is part antiwar film, part love story.  Credit should be given to Waldo Salt and Robert C. Jones' Oscar-winning original screenplay for maintaining that balance without letting one overwhelm the other.  If I were to qualify Coming Home, however, I'd argue it's more love story than antiwar film, for the majority of the focus is between the unobtainable love between this sheltered woman and this angry man.

Jane Fonda is excellent as Sally, portraying the character's evolution into not a full-on antiwar protester in the Hanoi Jane (or Bagdad Barbarella) mode but into someone who begins to wonder whether this far-off war was worth all the pain inflicted on everyone she knew was worth it.  Voight too was excellent as this man, full of fury and rage, who slowly gives his heart to someone, even if he cannot fully give his body.

However, the love-making scene between Fonda and Voight was, at least to me, more graphic than what I saw in Voight's Midnight Cowboy.

About the only performance that I would argue was a little overdone was Dern's, particularly in the last scene where he threatens both of them with death.  This doesn't take away from the strength of an earlier scene, where while on holiday in Hong Kong with Sally, he talks about his own quiet disillusionment about how to advance in the war, finding the idea of cutting heads and being praised for it hard to bear.

Ashby makes Coming Home almost documentary-like, drawing natural performances out of Voight and Fonda.  It never felt like a 'film', as if I were watching a production, but instead was watching real-life.  Voight's final talk to the boys about to go to war and the cost to him is devastating, the fire and fury and pain and sadness of it all pouring out.  It's reminiscent of Lew Ayres' talk to the boys in All Quiet on the Western Front.

It is curious that Coming Home doesn't answer the question of why exactly Bob went out into the ocean.  Was it a suicide?  If so, was it due to his Vietnam service?  To his wife's adultery?  In the hope of letting her go honorably?  We don't even know if it really is a suicide attempt or a way to perhaps absolve himself, but knowing that Sally is oblivious to all this and will eventually come back from her life to find it shattered is all the more heartbreaking.

I think we're not meant to know the answer.  We  have to come up with our own separate ending, for life doesn't give us one.  Coming Home is a sad love story of people caught up in the aftereffects of a war.  Beautifully told, with strong performances all around, and even as a document of late 1970s America, it is a strong film that still resonates and could easily be remade today.