The 44th Academy Awards had one highlight that is undisputed.  Charlie Chaplin closed the show with the presentation of his Honorary Oscar, unofficially closing one of the most controversial chapters in the annals of Oscar.

Chaplin had been essentially exiled by the United States in 1952 due to a mix of his political views and his scandalous private life, his reentry visa having been revoked.  He was bitter about what he perceived as American hypocrisy and refused to return, settling in Switzerland.  This now-unofficial exile ended nearly twenty years later when he returned to accept the Oscar (take THAT, George C. Scott).  The emotion of the night overwhelmed him.  It looked for a time that he might be too ill to come, with him in a wheelchair, sitting backstage looking at the highlight film of his career.  Then, once he had to go on stage, he rallied and gave a brief but heartfelt thank you to those "wonderful, sweet people" who had invited him.

It was a reconciliation long in the making, the bitterness of nearly twenty years dissipating between both sides.

In terms of the awards there were some interesting notes.  The Academy was acknowledging the era by awarding its highest honor to The French Connection, a tale as solidly in the 1970s as any.  It even ventured into being more adventurous when it came to the music categories as we shall see.  The Best Supporting Actor and Actress nominees were both all first-time nominees, and both had two nominees from the same film that didn't cancel each other out.

Oh, sweet Mother of Mercy!  WHO came up with this idiotic list?!  Apart from The Age of Not Believing and Theme From "Shaft", whoever heard of ANY of these songs?   Even the fact that they've pretty much been forgotten perhaps could be forgiven if they were, well, anything other than  so hopelessly square to make milquetoast seem almost avant-garde.  I listened to all five nominees, and truth be told I'm not sure there's much difference between Bless the Beasts and Children and Life is What You Make It. If you played just the melody, could you tell the difference between four of them? For Heaven's sake, TWO of these dry ditties have "Children" in the title!  Syrupy, Syrupy, Syrupy!

There's not a lick of a difference between the first four, so Theme From "Shaft" was not just the right choice, but a massive jolt to the staid Academy, making its win downright revolutionary.  The bridging between the urban sound with strings and some pretty daring lyrics with double entendres was if not particularly brave at least an acknowledgement of the brilliance of Isaac Hayes' song.  Even the production number from the Academy Awards presentation wasn't the embarrassment it usually is.  It would have been absolutely horrifying if any of the other songs would have won, and one of the lowest points in Oscar history.

Fortunately, sense hit the Music Branch and we were spared a disaster.

Normally, I would just put in my own choice (which isn't the Theme From "Shaft"), but instead, I think it will let you listen to those themes that the Academy could have nominated but chose to overlook for such songs as All His Children.


From Harold and Maude, If You Want to Sing Out, Sing Out.  Music and lyrics by Cat Stevens.

From Willy Wonka and the Chocolate Factory, The Candy Man.  Music and lyrics by Leslie Bricusse and Anthony Newley.

From Willy Wonka and the Chocolate Factory, Pure Imagination.  Music and lyrics by Leslie Bricusse and Anthony Newley.

Now, I ask you, which of the official nominees do YOU remember apart from Theme From "Shaft"?

Think on those and then go down to see my winner.

From Willy Wonka and the Chocolate Factory, Pure Imagination.  Music and Lyrics by Leslie Bricusse and Anthony Newley.

I found four better and more remembered songs than such things as Life is What You Make It or Bless the Beasts and Children, all eligible as far as I know, and all blissfully ignored for perhaps one of the worst slate of nominees in this category.  Ah, if we can count on one thing when it comes to the Music Branch of the Academy, is that they will never miss an opportunity to miss an opportunity (to quote the late, great Abba Eban).  Their official list of Best Original Songs of 1971 makes the contest between Donald Trump and Hillary Clinton look downright rational.

I think each of these songs could have easily have won and I'd have no objection to any of them winning.  I also think Theme From "Shaft" is one of the greatest Best Original Song Oscar winners.  However, I'm going with Pure Imagination due to the fact that it's so iconic, and if you listen carefully, the music holds a bit of a creepy, off-kilter mood to it, as if beneath the sweetness of the lyrics there is something dark and menacing lurking just beneath.

My issue with A Clockwork Orange is that not only did I find it creepy in a bad way but highly pretentious.  I remember being dragged to a screening by my friend Fidel Gomez, Jr., and found it in turns horrifying and self-important.  I don't object to Friedkin winning, for The French Connection is an extremely good film.  However, I was so moved by the tale of lost youth in Texas that my heart goes to Bogdanovich's work in The Last Picture Show.

Despite some great work by others, I see nothing to shift my view that Bogdanovich shouldn't win.

In a rare moment, two actresses from the same film didn't cancel each other out.  For me, Leachman's performance as the lonely, lovelorn housewife, a cougar with a heart, was a devastating one.  Her last scene where she seems to scream out to the world was simply fantastic. 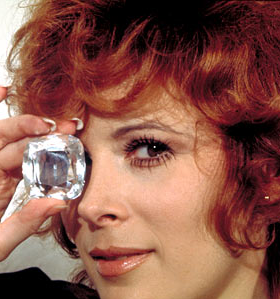 Despite that, and despite some really strong work by others, my heart goes to the sassy, flirtatious, delightfully devious Tiffany Case from Diamonds Are Forever.  St. John knew what the part was, and played it to perfection.  Her Tiffany Case (among the more amusing Bond Girl names) was unapologetic about being a thief, and moreover made Tiffany Case something so rare in a Bond film: a funny and fun Bond Girl who was smart enough to make it funny and fun.  Part comic relief, part self-reliant woman, Jill St. John is among my favorite Bond Girls, and unlike others before or after her, St. John has never regretted either her role or in being called a "Bond Girl".

In a rarer turn, we have TWO categories where TWO actors from the same film are nominated and don't cancel each other out.  Sometimes a single monologue can be so good that it's worthy of recognition.  This is how I feel about Ben Johnson's performance in The Last Picture Show.  A sense of tragedy, of loss, of that deep pain beneath that we keep within us, that one that got away...it's all there.

No, nothing to have me change my mind.

Here is another rarity indeed: two biopics losing Best Actress, back when a biopic wasn't an automatic Oscar win (like Eddie Redmayne).  The film may have been called Klute, but it doesn't seem like his story.  It seems like Bree Daniels' story.  Bree is no Happy Hooker.  She's a survivor, someone who knows the difference between sex and love, and who is in danger.

I am no fan of Fonda's politics, but at least she was sensible enough to know that the Academy Awards were not the appropriate venue to get her views out.  A lot of people, particularly the producers, were in terror of what Hanoi Jane might say, and some Academy members weren't thrilled when they saw Tom Joad's daughter virtually dancing with men killing their sons in battle.  However, if we go by performances, I think for now I'm going with Fonda.

Fonda was such an odds-on favorite that three of her nominees didn't bother showing up.  Only Suzman bothered to appear.   I had Page win for some time, but opted at the last minute to go with the Academy and give it to Fonda.

AT LAST MY GENE HACKMAN LOVE CAN BE EXPRESSED!

In case you don't know, I'm an unabashed Gene Hackman lover.  Get him a Kennedy Center Honor already!  As the obsessed detective determined to bring down a major drug ring, Hackman brings his everyman quality to the role.  It's intense, fiery, and he towers over all the other performances. For once, I'm going to temper my Gene Hackman love for another Gene and give it to Wilder's iconic turn as the slightly mad, slightly whimsical, always fascinating Willy Wonka.  It turns crazy and gentle, Wilder will always be THE Willy Wonka, impresario of a world filled with Pure Imagination.

The nomination for A Clockwork Orange is to please the critics, Fiddler on the Roof to please audiences, Nicholas and Alexandra to please the Academy's penchant for big/epic biopics.  That leaves us with two choices: the gritty The French Connection and the tragic The Last Picture Show.  I've no objection to The French Connection winning.  It's a fine film.  However, emotionally I was overpowered by this tale of Texas, an anti-Giant.

Therefore, I name The Last Picture Show the Best Film of 1971.

I think there were better films than Nicholas and Alexandra or even Fiddler on the Roof, a rare musical to get a nomination when the genre was well out of fashion.  And there I go, nominating a musical too.  To be fair, Willy Wonka and the Chocolate Factory forms a part of practically everyone's childhood and I think people don't think of it strictly as a 'musical', even though it is one.  However, I see no real challenger to my original choice.

As such, I select The Last Picture Show as the Best Picture of 1971.