Pride and Prejudice and Zombies: A Review (Review #831) 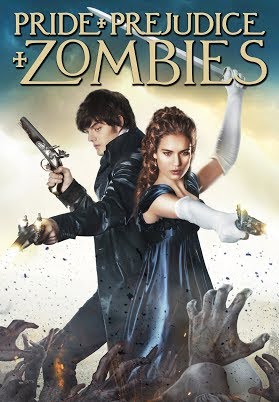 PRIDE AND PREJUDICE AND ZOMBIES

How exactly to judge Pride & Prejudice & Zombies, this bizarre mix of Jane Austen Regency-era romance and schlock horror?  Perhaps the best way is to accept the entire premise is idiotic: Austen and zombies make for poor companions.  Pride & Prejudice & Zombies wants to have it both ways, give us all the romantic battle between Miss Bennet and Mr. Darcy as well as the actual battle between the proper British and the undead.  It's a balance it can't quite keep up, but bless it for trying.

The Bennet sisters have two difficulties in life: the pressure to find suitable husbands and the war against the undead.  The eldest, Elizabeth (Lilly James), a mistress of the blade and the Chinese arts, has no desire to relinquish her warrior skills to any man.   She isn't interested in the newest catch, Mr. Bingley (Douglas Booth), despite his wealth, and she certainly is not interested in his haughty, arrogant friend, Colonel Fitzwilliam Darcy (Sam Riley).  Mr. Bingley is instantly infatuated with her sister Jane (Bella Heathcote), as Jane is with Bingley.  Darcy, for his part, scoffs at all of them...but he does admire Elizabeth's superb fighting skills, which are as entrancing as her dark eyes.

The Bennet sisters have plenty of opportunities to show off their mastery of the Chinese martial arts, which puts them at a disadvantage as the Japanese martial arts are considered more sophisticated by the British.  Darcy is wary of Jane, who appears ill when on route to call on Bingley, suspecting she's been 'infected'.  Elizabeth steadfastly refuses to accept such notions and does her best to keep Darcy's blade and flies away from her.  Jane does recover from her illness, but still Darcy suspects she might be among the undead overtaking the country.

Enter the Bennet's obnoxious, idiot cousin Parson Collins (Matt Smith), the closest male heir to the Bennet's who will inherit their estate upon the death of the Bennet sisters father (Charles Dance).  He first sets his eyes on Jane, but when he's told that she is coming close to an agreement with Bingley, he then sets his eyes on Elizabeth.  She won't have him, especially his insistence on her dropping her weapons.  Things are still unsettled when upon visiting their aunt, the Bennets encounter Lieutenant Wickham (Jack Huston), a dashing officer with a complicated history with Darcy.  At the ball, Darcy overhears Mrs. Bennet (Sally Phillips) boast of Jane's intentions to marry Bingley, which arouses his suspicions she is only after his money.  Little time to worry about that, though, as another zombie attack injures Bingley. 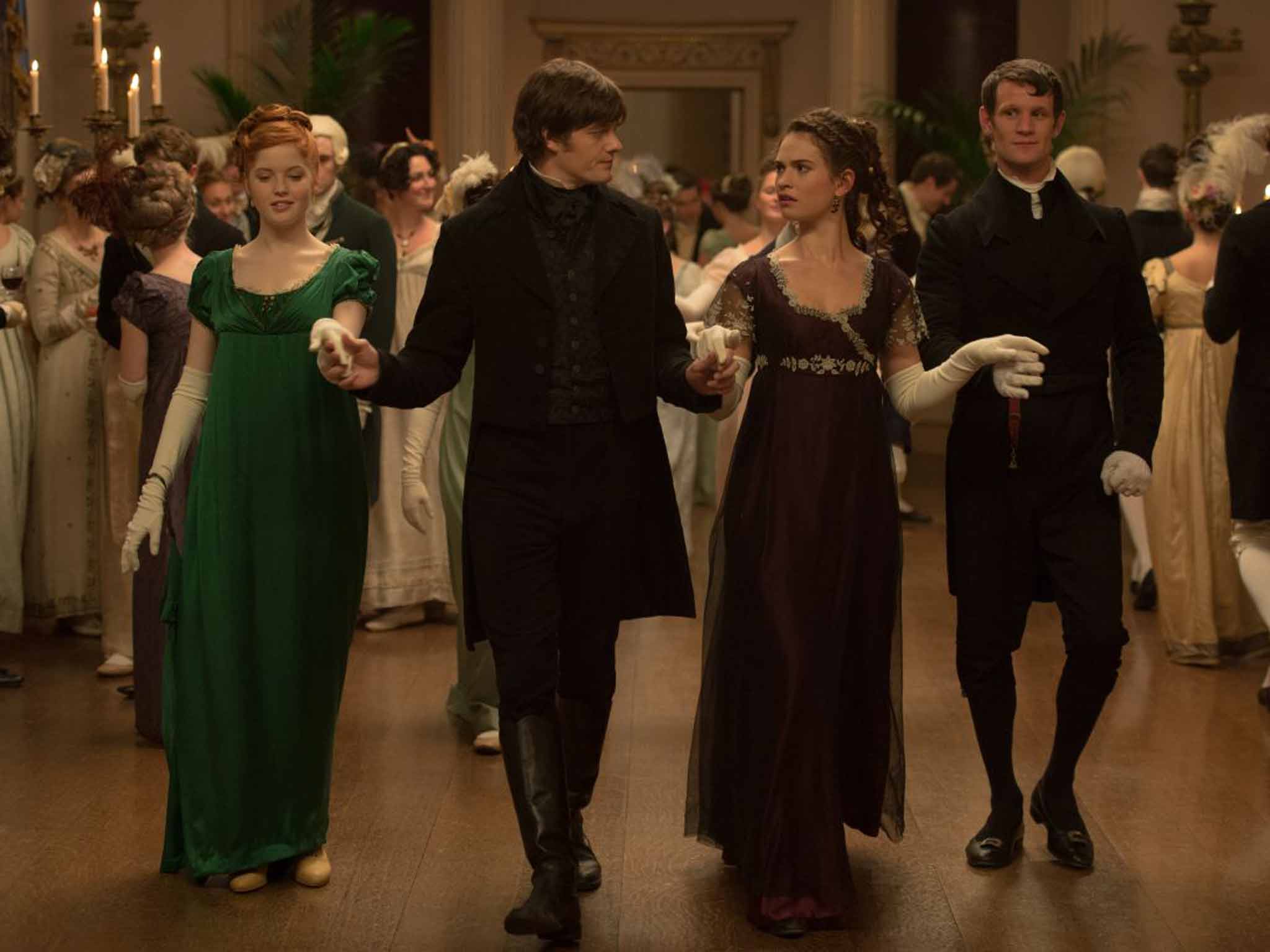 Darcy gets Bingley out of the area, upsetting Jane, who is truly in love with Bingley.  Elizabeth is angered by Darcy's pride and prejudice, and more angered to learn that he has ruined the honorable Wickham.  Making things more complicated is her conflicting feelings for both men, and Wickham's discovery.  He takes her to St. Lazarus, where a group of semi-zombies are living in seclusion.  They are not fully zombies, having substituted pig brains for human ones and keeping a semblance of themselves.

Wickham persuades Elizabeth to help arrange an audience with Lady Catherine (Lena Headley), a world-class zombie hunter, Collins' neighbor, and Darcy's aunt.  The meeting comes through Collins presenting his newest beloved, to his patroness.  Wickham asks for money to help the zombie/human relations, but Darcy is adamantly opposed.  Later, Darcy shocks Elizabeth by proposing marriage to her, which after a physical altercation, she steadfastly refuses.

When Elizabeth returns home, she receives a letter from Darcy explaining himself: he did attempt to protect Bingley from people he considered fortune hunters but failed to see that Jane was not part of any plan, and told her the truth about Wickham.  Wickham, far from noble, had attempted to run off with Darcy's fifteen-year-old sister to elope (and get his hands on the family fortune).  Lady Catherine attempts to battle Elizabeth through a proxy, but Liz is able to defeat him.  News then reaches them that Wickham has abducted the youngest Bennet sister, but no one knows to where.  Elizabeth deduces it is to St. Lazarus, and Darcy, fighting the zombie hordes that have overrun London and threaten to extend beyond the Royal Canal that separates the living and undead, goes too.  He takes along some real brains, which after the rescue sets the formerly semi-civilized zombies into an orgy of human hunting.

To his shock and horror, Darcy discovers Wickham has been undead all along, but is saved at the last minute by Elizabeth.  Jane and Bingley, waiting at the only standing bridge, struggle to follow orders to blow it up, but in the end, they do...just as Darcy and Elizabeth are racing towards it.  After Darcy recovers at his aunt's estate, Mr. Darcy and Miss Bennet finally confess their love for each other, and Parson Collins has a double wedding: Jane & Bingley, Fitzwilliam and Elizabeth. 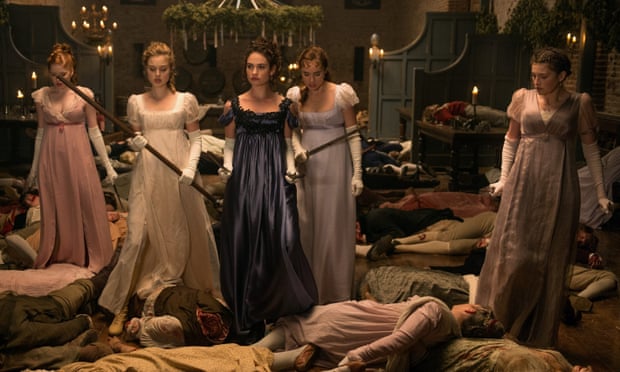 As I said, Pride & Prejudice & Zombies wants to have it both ways: be the novel people know and love, and throw in some zombies at them simultaneously.  Perhaps the Seth Grahame-Smith parody is better than the adaptation, but the film doesn't make me want to read it.  In fairness, I'm one of the handful of people who has no interest in the zombie craze (I've no interested in The Walking Dead), but even then, I think the film could not maintain the balance of these two wildly different genres.

We see this every time we get long stretches of what could be a straightforward adaptation of Pride & Prejudice.  At that point, with no zombies stalking about, we can concentrate on what is a good story told pretty well and with pretty good performances.  About the only time the blending of horror and romance mix well is when Darcy and Elizabeth have a literal fight.  The mix of their ever-so-posh putdowns and them going at it with swords and martial arts is pretty lively and oddly entertaining.

This is lent great credibility by the performances.  James would make a fantastic Elizabeth in a straight adaptation, her mix of anger and demands for independence a great watch.  I've been a fan of Riley's since his breakout role in Control, and here it's nice to see him show a slightly lighter side while keeping within action-hero mode.  I thought well of Heathcote as Jane, and it was nice to see Booth at least not embarrass himself like he usually does, where only his beauty counts for anything (case in point, Jupiter Ascending or Romeo & Juliet).  I think Huston could have been a good rival...in a straight version of the story...and to be honest he too did a good job in playing it straight (even if perhaps a little camping it up would have helped).

Curiously, the best performance was from Smith (and I say this as someone who pretty much detested him as the lead in Doctor Who).  His Parson Collins was deliberately fussy, prickly, idiotic, and obnoxious: exactly what the role required.    Yet with Smith we can see where Pride & Prejudice & Zombies was going wrong.  He had nothing to do with zombies and seemed to be in a straight adaptation of the Austen classic.  As such, he showed that the film, perhaps like the book, was not mashing the two ideas well-enough to be either horror or comedy.

The film also has some issues apart from the mish-mash mix-up.  The cinematography sometimes is so dark it becomes difficult to actually see what is going on.  The battle where Bingley is injured is a case in point.  I think he was dragged down the stairs by the zombies, and Darcy in fear asks Elizabeth, who has been fighting them in the kitchen where both are, if he's been infected.  Truth be told it is flat-out impossible to make out anything that is going on.

The film also stumbles when it wants to build up tension over Jane's potential illness.  Last we see Jane, it looks like she's being attacked by a zombie, and next she is violently ill.  It isn't until much later that we find that she is fully alive and alive, but sometimes the film wants to suggest that perhaps she isn't.  Again, trying to have it both ways.  This whole thing could have been worked out better, rather than leaving things slightly confusing.  It also stumbles with Wickham's reveal (I figured that out long before the film did) and using "St. Lazarus" as the refuge of the undead wasn't particularly clever.  Finally, I did wonder about the semi-zombies, whether the film could have actually have gone in a different direction to have had human/zombie détente.

I will compliment Fernando Velazquez's score, which did what the film as a whole couldn't: keep the balance between romance and horror/comedy/action.   I also enjoyed the fight sequences, that curious mixture of gowns and kick-ass bloodletting.

Again, Pride & Prejudice & Zombies isn't downright horrific.  It isn't particularly clever with its premise, or funny either.  It does make one yearn for what a real, straightforward adaptation with the same cast would have looked like.  THAT I think would have made a far more interesting experience.  When it comes to Pride & Prejudice & Zombies...we could have done with more Pride, more Prejudice, and less zombies.