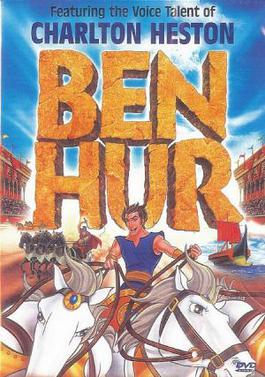 I have seen just about every version of Ben-Hur: A Tale of the Christ, but there was one that slipped through the cracks.  It is the animated version made direct-to-video, and in a certain way, it is a very bittersweet production.  Charlton Heston, who won the Oscar for playing the title character in the 1959 remake of the 1925 silent epic, returns to play both the title character and serve as narrator.  What could have been a triumphant return to his most iconic character instead became his farewell performance, for Heston announced shortly afterwards that he had Alzheimer's Disease and quietly retired from the scene, dying five years later.

The decline of Heston is sadly evident between the product and the post-production. If one watches the special features that have an interview with Heston, he looks weak, stiff, halting, even slightly confused.  When we see him introducing the film and speaking his lines in it, however, he sounds strong and confident, the old Chuck we know and love.  This Ben-Hur is more child friendly and more overtly Christian as I believe it was geared towards the evangelical market.  This does not make it either bad or good, but those who know the 1925 or 1959 versions, or even the 2010 television miniseries might be surprised by some of the changes made to make it palatable to both target audiences.

Ben-Hur opens and closes with a live-action version of the voice of both the main character and narrator, Charlton Heston.  The film sticks pretty close to the story: Judah Ben-Hur, a wealthy Jewish prince in the Roman province of Judea, is at first thrilled to see his old friend, the Roman Messala (Duncan Fraser).  However, there is a dark change in Messala, more mocking of Judah's faith and people.  When the new Roman proconsul to Judea arrives, Judah is watching from his rooftop with his sister Tirzah (Willow Johnson), and some tiles become loose which strike the Romans.  Some Judeans take this as a chance to throw stones at their hated occupiers, and Messala sweeps in to arrest the Hur family, unaware of the presence of their slave Esther (Kathleen Barr).  He orders the house sealed, Tirzah and her mother Miriam (Tabitha St. Germain) arrested, and Judah sent to the galleys.

Judah survives five years in the belly of the Roman ship thanks to his strong faith, and at a sea battle manages to save the life of the commander, Quintus Arrius (Richard Newman).  In gratitude, Quintus frees Judah and adopts him as his heir.  Despite his mastery of Roman pursuits, Judah still longs to know what happened to his family.  Unbeknown to Judah, Quintus had sent his servant to Jerusalem to find out, and is shocked to learn they've turned into lepers. They are immediately turned out of prison and go to the Valley of the Lepers.  Judah insists on searching, and Quintus relents.  Once back in his homeland, he encounters the chariot races there and Sheik Ilderim (Dale Wilson).  He also encounters Balthazar (Long John Baldry), who is in search of The Christ.

Judah has met Jesus Christ before, when He offered him water.  First, though, he must find his family and race the arrogant Messala.  The Roman does not die in the race, but is left crippled.  Judah is left with guilt on both fronts: aware of what has happened to his family and shamed over Messala, where he finds no peace.  Now, they find Him (Scott McNeil) and Judah wants to serve in His army, not understanding it is not an actual army but one of forgiveness.  They go to the Crucifixion and there the Hur women are healed.  Christ is resurrected and Judah, with his wife Esther and their children, tell them about the Christ.

As I said, Ben-Hur was made for the Christian market, particularly towards children, so the focus is less on Judah's bloodlust and desire for revenge and more on faith and forgiveness.  We can tell this because if memory serves right, not once does Judah mention any desire to strike back at Messala or offer hatred as a motivation.  It is faith, not a desire to avenge his family, that keeps him alive in the galleys.

As it is geared towards children, certain things had to be changed.  The chariot race does not lead to any deaths, and Messala not only is not killed, but ends up joining Judah at the Crucifixion, going so far as to ask for forgiveness of him early.

Ben-Hur is also more Christ-centered than previous versions.  First, going against all traditional adaptations, Christ is shown and heard.  Perhaps this is why all future versions violate General Wallace's instructions and wishes to leave Christ speechless and faceless.  In this case, it is understandable, as not hearing or seeing Christ would confuse children.  However, one wonders whether now this violation of tradition has seeped to adults, who in theory would have some knowledge and understanding of Christ and who He was (either historically or faith-wise).

The voice performances are pretty strong, not talking down to children and making things as realistic as possible.  McNeil, who does not speak often as Christ, sounds a bit too much like Heston to where one can be forgiven for thinking that Chuck took three roles. Heston himself manages to make the two roles he has distinct even though there isn't much variation in his own distinct voice.  Fraser was appropriately sleazy as Messala, haughty and arrogant, and Wilson was almost chipper as Sheik Ilderim.  To the film's credit, they made a strong effort animation-wise to make the characters look authentic, using darker tones for the Arab characters and even making the Romans less fair and more olive toned.  Only Judah was essentially white, which I figure is in keeping with Heston's look.

The animation was good, not great, and they did have a mix of computer generated and traditional cell animation.  For big scenes (the sea battle, the chariot race), they relied on computers, sometimes to their detriment (if you look quick, it looks like the soldiers in the sea battle have no faces).  The cell animation was fluid, allowing for expression.

On the whole, I think this animated version of Ben-Hur would be a good way to introduce very small children to both some ideas about Jesus and this story.  By no means epic like its live-action counterparts, it is palatable for its target audience. 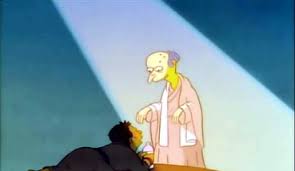