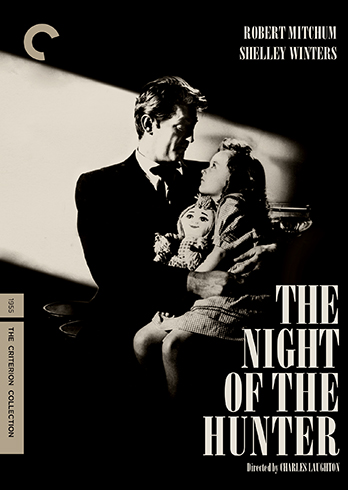 THE NIGHT OF THE HUNTER

Sometimes a film is so built up that when you see it you end up sorely disappointed.  The Night of the Hunter, mercifully, is not in that category.  A horror show of  the darkness that adults place on children, it is a frightening story brilliantly told, with two great performances by actors.

Psychopathic "Reverend" Harry Powell (Robert Mitchum) is a serial killer, mixing his own deranged ideas of God with his greed.  He kills widows and takes their money, all with the belief that God directs him to his victims.  Powell is arrested for car theft and sentenced to a brief time in jail.

Meanwhile,  Ben Harper (Peter Graves) comes rushing to his house after having committed armed robbery that resulted in two people killed.  He finds his children John (Billy Chapin) and Pearl (Sally Jane Bruce) playing in their yard.  Desperate to hide the money, he finds a secret place and tells the two youngsters never to tell where he hid it.  Ben is arrested in front of his son (Pearl being far too young to realize what's going on) and sentenced to death.  It is in prison that Ben and Harry meet and where he learns about the money.  Ben doesn't reveal much, but just enough that Harry knows the children know.

With Ben dead and Harry released, Harry goes to find Ben's widow Willa (Shelley Winters). She is at first concerned about him coming for the money that has never been found, but when Harry tells her Ben told him he threw it in the river, she is relieved and feels God brought Harry to her.  When Willa tells John what "Ben" told Harry, he instantly knows that not only is Harry a liar but a threat.  Pearl, however, is too young and innocent to understand all this, and soon begins to trust and love Reverend Harry.

John, however, will not fall for him, constantly telling Willa that Harry is after the money.  Despite this, her piety and belief lead her to marry Harry, who will not fornicate with his bride.  Willa, believing herself a sinner par excellence, joins him in crusade and in her denying herself as a woman.  Her faith in Harry is so great that when she comes home and overhears Harry bullying Pearl to tell him where the money is (confirming John was telling the truth), she believes it is a sign of her lack of faith than her children's lives in danger.

Harry murders Willa and claims that she ran off, leaving John and Ruby in mortal danger.  Eventually he does get the truth out of where the money was hid (inside Pearl's doll, which the audience already knew), but they manage to escape him and float down the river.  Unaware of their mother's murder whose body is found by John's river-rat friend Birdie (James Gleason), who in turn won't tell because he fears he'll be blamed for it, the children float down the river while the psychopath Reverend pursues them, going so far as to steal a horse.  It takes all of John's grit and determination to keep one step ahead of Harry, a man possessed with almost demonic powers that when he hears him coming far off, John wonders in half-disbelief, half-horror, "Don't he ever sleep?" 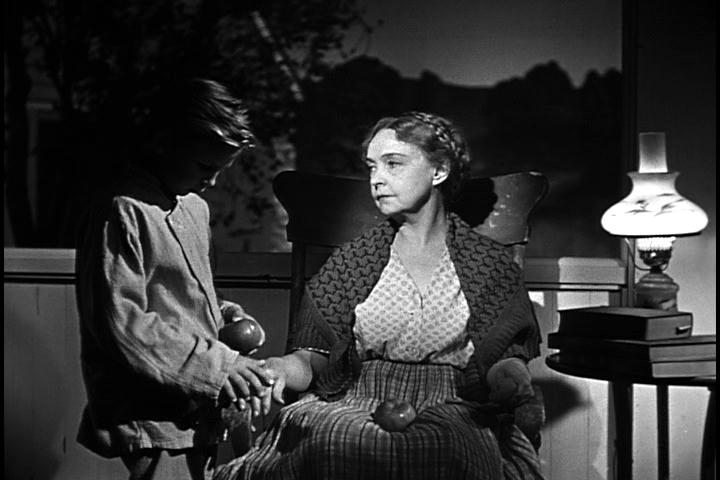 John and Ruby eventually land near the home of Mrs. Cooper (Lillian Gish), a God-fearing woman who has three young orphans already in her care.  She takes John and Ruby in, unaware of the wickedness they've seen and been through, but aware that something is dangerously amiss.  Harry eventually shows up, at first charming Mrs. Cooper's oldest ward, Ruby (Gloria Castilo), a young woman on the verge of sexual awakening.  Ruby tells Harry about the two new youngsters, and he knows it's his chance at both the money and killing them.

Mrs. Cooper, however, is not taken in by Harry's act, as she knows her Bible as well as he claims to.  He stakes her home while she keeps watch, and she manages to shoot him when he sneaks into her house.  Harry takes shelter in her barn and she rushes to get the police.  They come in the morning and arrest him in the same way John's father was, and in his distress he rushes with the doll and thrashes him with it, shouting he can keep the money.  In a coda, the children and Mrs. Cooper are given excessive care by the townsfolk, who want to lynch the mad preacher.  Mrs. Cooper gets the kids and flees to her house while Harry Powell is taken away to the more secure prison, where the executioner for once is looking forward to his job.  Now it's Christmas, and the children thrill to their gifts, while Mrs. Cooper marvels at the strength of children.

Charles Laughton, best known as an Academy Award-winning actor, directed The Night of the Hunter, and the box office and critical failure of the film so devastated him that he never directed another film again.  That is a real shame, for The Night of the Hunter shows that visually and with other actors, Laughton had immense skill at making things come together so well.

Visually, The Night of the Hunter draws from German expressionism with its use of shadows and off-kilter visuals.  When Harry is about to kill Willa, the entire scene is filmed in a very expressionist way: Powell standing, almost posing in his madness, under what look like church arches while the innocent Willa is bathed almost in divine light.  Later, when Powell comes riding close to John and Pearl, the shadow of Powell on his horse dominate the visuals (even though I wonder if John could have seen Harry so clearly, even as he sang his hymn Leaning on the Everlasting Arms). Perhaps the most visually arresting scene is when we come across Willa's body in the lake.  Shot in total silence save for the water, the visual is both beautiful and frightening at once, Willa's hair 'floating' in the water matching that of the seaweed.  Visually it could almost be a painting, but the shock and horror of the innocent and poor Willa's demise hits us all the harder as we see her, tied down, a look of sadness that shows she won't rest in peace.

We see Laughton's brilliance as a director when Harry is waiting outside at night while Mrs. Cooper keeps watch.  Harry has been using Leaning on the Everlasting Arms to polish his preacher cred, but he's no match for this kind old woman, outwardly weak and gentle but internally strong.  She knows her Scriptures far better than he does, and she too sings Leaning on the Everlasting Arms but using different lyrics, trusting in Jesus.  This subtly suggests two things courtesy of Laughton and screenwriter James Agee (adapting Davis Grubbs' novel).  It shows a true battle between good (Mrs. Cooper) and evil ("Reverend" Harry Powell), both using the same weapons (faith).  It also suggests that said faith can be used for evil or good, depending on the motives.

The Reverend is clearly deranged in his ideas of God procuring women for him but his manner is so outwardly pious that he fools even the elect (to use Scripture).  Mrs. Cooper on the other hand makes no great proclamations on her faith, but she lives it out.  She's fully aware of the evil in the world (commenting to her grocer whom she does business with, "It's a hard world for little things"), but she will overcome evil with good (again to quote Scripture).

Again and again Laughton shows us visually how strong the image can create impact and emotion.  A particular moment is when innocent Pearl has cut out a couple of the bills to make impromptu dolls.  John quickly helps her put the money back in the doll, while unbeknown to them Harry is at the door of the house, watching them.  Will he come out in time to see the money?  The tension Laughton builds up is brilliant.

Directing actors, Laughton shows here how well he could do.  I think Mitchum gives his best performance as the iconic Reverend Harry Powell.  He is fascinating as a man totally convinced of his own 'walk with the Lord' while also maintaining his right to kill women and children for his own advantage. In his insanity, his "Love vs. Hate" tattoo story, Mitchum commands the screen.  Shelley Winters' role as Willa is small but no less impactful and tragic, her slow realization that the marriage will not be consummated making her tragically think she is the sinner and not the victim.

Lillian Gish demonstrates that she wasn't just a silent film star unable to speak.  Her Mrs. Cooper was kind but firm, aware of evil but not afraid of it.  She is the polar opposite of Harry: he the darkness, she the light as the two end up battling for the children.

The Night of the Hunter is visually remarkable, with some real moments of tension and excitement (the flight of the children from the murderous Powell is quite intense and harrowing). The performances, particularly by Robert Mitchum and Lillian Gish, are among the best of their careers, with Shelley Winters joining them.  The film is a tragedy but with a happy (or happyish) ending.  Suffer the little children, victims of the evil adults unleash on them.