I Saw The Light: A Review 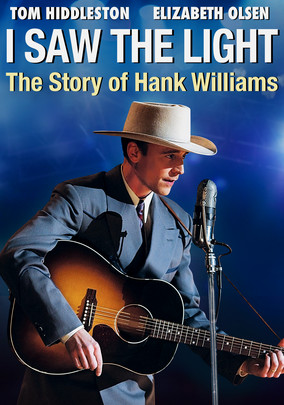 I SAW THE LIGHT

Put this down under "another failed Oscar bid masquerading as a film".

The biopic is the de facto way for an actor to get at least a Best Actor Oscar nomination if not an outright Academy Award.  In the past ten years, the Best Actor Oscar has gone to an actor for a biopic eight times.  Excuse my cynicism, but I get the sense that I Saw the Light, the second biopic on Hank Williams, Sr.*, was Tom Hiddleston's bid at the golden guy.  It seems perfect for Loki's ambitions: it's a biopic...about a famous yet troubled performer...and the actor playing said famous yet troubled performer not only has to adopt a completely foreign accent (another Oscar catnip) but has to learn to play an instrument AND do his own singing in said accent.

Hiddleston, my cynic's heart tells me, was all but ordering his tuxedo.

However, like his fellow Brit Benedict Cumberbatch, whose turn as Australian WikiLeaks founder Julian Assange in The Fifth Estate (complete with accent and fright wig) bombed both commercially and critically, dear Tom will just have to find another property (preferably another biopic) to get his chance at Oscar.  It worked for Benny, who parlayed his 'Sherlock-with-a-cold-who-is-also-a-closeted-homosexual-and-tortured-for-it' bit into Oscar's charms in The Imitation Game (though there was no way anyone would topple the showy and grotesque 'genius-with-disability-who-overcomes' shtick of Eddie Redmayne in The Theory of Nothing.  Biopic is one thing, but 'illness ALWAYS wins').

I think the filmmakers behind I Saw the Light, and perhaps Hiddleston himself, saw the light and realized that this biopic would not get any attention come Oscar campaigning time.  Worse, if they had tried to mount a serious campaign for him, Hiddleston's chances would be severely damaged to where even a legitimately good performance in a good film would be seen with a wary eye.   This explains, I think, why the release date for I Saw the Light was moved from November 2015 (when the glut of Oscar-bait films comes flooding us) to March 2016 (when few if any films with Oscar dreams are released).  It was a quiet release for a film once thought to perhaps be an Oscar contender, and I think most everyone involved preferred that it be given as quiet a release as possible.  I Saw the Light is disjointed, clumsy, confused and confusing, and worse, does not make a case as to why Williams, one of the true legends of Country Music, was worth our time or interest.

Hiram King Williams, better known as 'Hank' (Hiddleston) is a talented singer/songwriter.  His first wife, Audrey (Elizabeth Olsen), is not, though she makes as good a go of it as possible.  Whether Hank knows Audrey has little to no actual singing/songwriting ability is foggy: he duets with her often, even on his early morning radio show, and he stands by her when the rest of his band wants her out, yet...

There are more rifts between him, his wife, and his mother Miss Lillie (Cherry Jones), who apparently thinks no woman is good enough for him...yet also isn't the clingly, Mother Bates-type either.  Hank's great dream is to play the Grand Old Opry, but being a youngster and relatively unknown doesn't help him enter the Country Valhalla.  The turmoil between Hank and Audrey continues, and his boozing and womanizing does not help.  He tries to dry out (I think) and in the interim he manages hit recordings like Lovesick Blues, even if it means another backup group.

At long last, he makes it to the Opry, but again his drinking and skirt-chasing get in the way.  Complicating matters is a.) his official divorce from Audrey, b.) his knocking-up of Billie Jean Jones (Maddie Hasson) whom he tells he won't marry because he's a ruinous husband, and c.) his second marriage to Bobbie Jett (Wrett Schmitt), whom he was seeing simultaneously and who is apparently a better fit for old Luke the Drifter.

Or maybe it was Billie he married and Bobbi he knocked up.  It was getting so confusing trying to sort out the two (of many) women he was screwing around with, and the fact that they had similar names did not make things any easier.  I think he ended up marrying Billie if we go by Bobbi's last name of Jett, remembering that one of Hank Williams' illegitimate children is country singer Jett Williams.   Well, I Saw the Light wasn't too concerned about continuity, so I guess I shouldn't be either.

Anyway, the Opry has no choice but to dump Williams owing to his boozing and his health issues which make him unreliable.  Williams, after years of back pain, finally is diagnosed with spinal bifida, and the alcohol and medication he takes to cure himself makes him a candidate for an early grave.  Defying the "27 Club" by two years, Hank Williams dies on New Year's Day 1953 at age 29.

A scene late in I Saw the Light captures perfectly why this film is a failure in just about every respect.  It's deep into Williams' self-chaotic life, and he's being driven home by his friend and former bandmate Don (Wesley Robert Langlois). Don starts by suggesting he has to have a serious talk with Hank about his life.  Hank appears to be ready to listen, then, Don apparently can't bring himself to speak truth to power and he and Hank go their separate ways.  There are things left unsaid, and I Saw the Light similarly cannot bring itself to form any ideas about Hank Williams.

It's all over the place, and the fault lies squarely with screenwriter/director Marc Abraham (adapting the Hank Williams biography by Colin Escott, George Merritt, and William MacEwan).  He doesn't know what or where or even how to present I Saw the Light, and apparently opts to have as many variations on telling a biopic as he can find.

He has faux-interviews with a couple of Williams' managers/friends (most of whom in the film aren't shown to have much interaction with Williams, let alone a deep and abiding friendship).  He opts for straight filming of scenes, and they are at times excessively artsy (the opening has Hiddleston, bathed in what I figure is divine light, singing I Saw the Light, a gospel song by Williams still sung in churches today).  At other times, they are so lifeless that it all but goads audiences to drop off or worse, laugh at what are suppose to be dramatic and intense moments.

Then again, how can anyone, even people as talented as Hiddleston or Olsen suppose to lift something with dialogue such as "Not for a second does it make up for crushing a person's dreams!"  This Audrey tells Hank when she overhears the argument over whether she has any talent to be on Hank's radio show.  It's a strange set-up: Hank simultaneously agrees and disagrees with the band's assessment of her talents (or lack thereof), telling them she can't sing but insisting she can too.  When they argue in the radio station hallway about this, he tells her they do have a hit record, and that's where she tells him this 'devastating putdown.

Not only is it a bad line, almost hilarious, but it never felt real.  Part of it is I think Abraham's decision to show them essentially alone, which makes it almost look like he had filmed a dress rehearsal rather than an actual take.

Again and again in I Saw the Light, people, whole situations just appear and disappear sans reason or rhyme.  When we first see Miss Lillie, she obviously has no interest in Audrey, but I thought she was just some random waitress at the honky-tonk Williams was performing in.  It took a while to figure out, oh, that's Hank's mamma.  A woman Williams was flirting with, who was at Mrs. Williams' home, just floats in and out and I'm not sure we ever saw her again.

Later, Williams goes to a music festival where he's kept audiences waiting for hours, disheveled, and out of it.  He goes up on stage, starts rambling (in verse from what I could make out) and then...we go to another scene.  The film builds it up slightly to make this an important moment, but there's no follow through.  An early part has him apparently drying out at a detox center in Florida, but the way the film presents it, he's just there.

In short, I Saw the Light jumps around so much that it quickly becomes disjointed, as if only those making the film should know what is going on or who is who.  We never get to know Hank Williams, what made him so special, what made him one of Country Music's greats, a man whose supremacy in the genre is unquestioned and who has few equals (Johnny Cash and George Strait being the only ones who could be mentioned in the same breath...sorry Luke, Keith, and Eric--love you all but none of you are George, Johnny, or Hank).

I'm not blaming Hiddleston or Olsen, who did what they could with such poorly-written parts.  Despite protests to the contrary, I was not overwhelmed with Hiddleston's Southern accent.  It was by no means bad, but I would question if he really was from Alabama if I ran into him in the street.  His singing voice was fine, though not exactly enough again to make me think I was listening to Hank.  Olsen shifted from shrew to harpy to loving and back again, and couldn't make her sympathetic.  Same for Hiddleston, who despite great efforts never could reveal who Hank Williams was or what spark made him so great.  It's more the screenplay's fault than his.  As far as I can make out, all Hank Williams ever did was sleep, screw, and write. We don't know him, and that's perhaps I Saw the Light's greatest flaw.

It's a real shame, because Hiddleston is fine as Hank Williams...not brilliant, but fine.  Hank Williams was a true musical genius, driven by his demons yet in constant search of redemption (a man who can write both Your Cheating Heart and I Saw the Light is a complex figure).  I Saw the Light never did.  It makes audiences so lonesome they could cry.

*George Hamilton, before he became known exclusively for his tan (and nothing but his bronzed, almost waxed, face), starred as Williams in a prior Hank Williams, Sr. biopic with another Williams song for its title: Your Cheatin' Heart.
Posted by Rick at 7:46 AM