I'm back to finish up Season Two of Gotham, a series that has been more focused, more thrilling, and simply leaps and bounds above the good but sometimes confused Season One.  Unleashed gave us some really great acting from just about everyone, some really tense moments, and even bits of comedy.

Acting Captain Harvey Bullock (Donal Logue) and his former partner, Jim Gordon (Ben McKenzie) storm Arkham Asylum to get at the office of Dr. Hugo Strange (B.D. Wong).  Fortunately for Strange, he's shredded as much incriminating documents as he can lay his hands on, frustrating Bullock and Gordon.  Strange and his assistant, Mrs. Peabody (Tonya Pinkins) have greater problems than two Gotham City Police officers.  Their assassin Azrael aka former Mayor Theo Galavan (James Frain) has gone rogue and they don't know where to find him.

Azrael is out hunting for his sword, and not afraid to kill anyone who gets in the way.

Meanwhile, Bruce Wayne (David Mazouz) goes to his frenemy Selina Kyle (Camren Bicondova) for help in breaking into Arkham.  Her friend Bridgit may be inside, one of Strange's sinister experiments.  Selina agrees to go in, but on her own.  As it so happens, Edward Nygma (Cory Michael Smith) wants out after seeing the horrors of Indian Hill, the secret lab buried inside Arkham, but cannot find a way out. 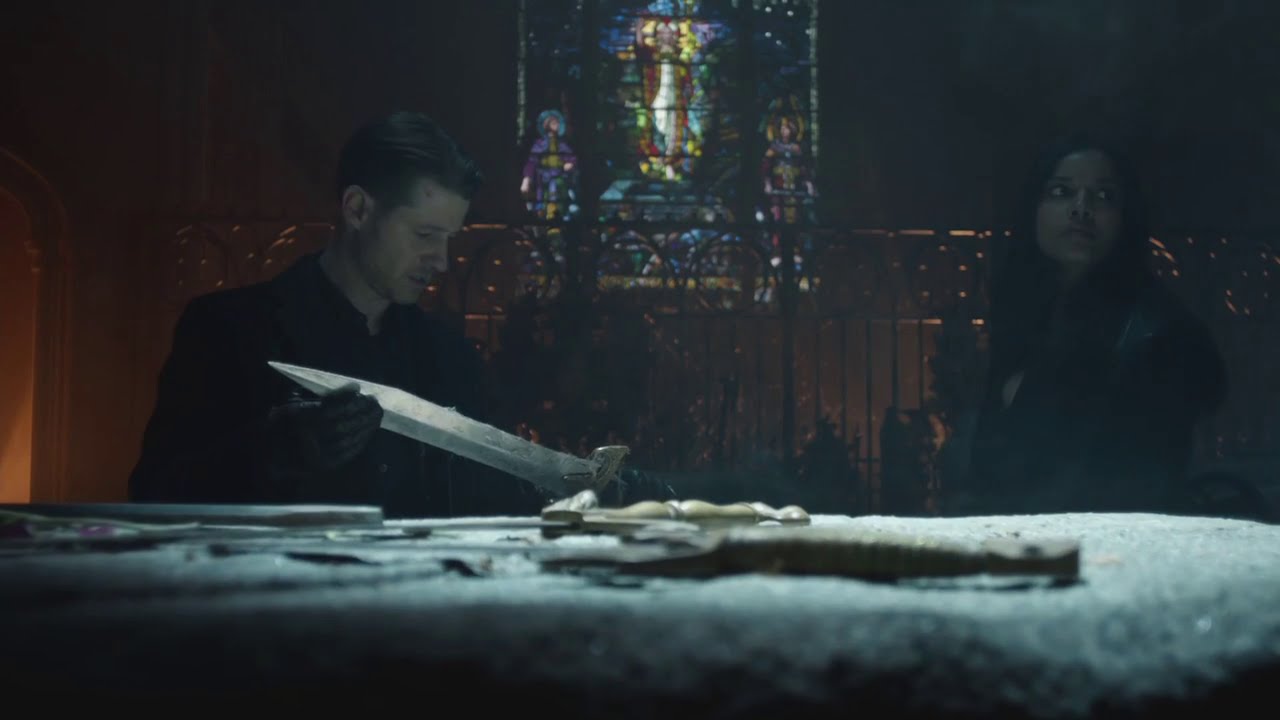 Bullock and Gordon go to Galavan's sister Tabitha (Jessica Lucas) for help, and she reveals the whereabouts of the Dumas Family Sword: in her grandfather's crypt.  A little grave-robbing creeps Bullock out, but Gordon and Tabitha do so anyway.  Azrael appears and despite Tabitha helping jog his memory he still stabs her as a traitor, and brings back memories of his original desire: to kill Bruce Wayne.

Her near-fatal injuries devastate Butch Gilzean (Drew Powell), but they play perfectly into the plans of Oswald Cobblepot, aka The Penguin (Robin Lord Taylor).  He's still filled with rage and fury at what the Galavans did, and in exchange for promising not to take revenge of Tabitha, Butch agrees to join forces with Penguin to bring down Theo/Azrael.

Azrael is too busy trying to kill Bruce, though he's protected by Alfred (Sean Pertwee).  Azrael will not be denied, continuing to go after Bruce.  At first he manages to outwit the crazed ex-Mayor, down to running him down in a car.  Naturally, we're dealing with a completely looney figure, and Azrael manages one last strike: using Tabitha's whip to at first strange Bruce, then bring him to heel.  As he forces Wayne down and is about to swing the sword, Gordon shows up to shoot Galavan.  Still, like Rasputin, Galavan still will not die.

It isn't until Butch and Penguin show up at Wayne Manor that Theo Galavan is finally, finally eliminated.  All it took was a bazooka to literally blow him up.

Selina breaks in, inadvertently crashing into Nygma.  In exchange for helping him find a way out, he will lead her to Indian Hill.  There, she is shocked to discover the extent of Strange's experiments, and finds Bridgit.  She, however, insists that Selina is the newest experiment, and calls herself "Firefly". What was really extraordinary about Unleashed is that there was a pretty strong sense of tension and suspense throughout.  A prime example is when Azrael battles both Alfred and Bruce.  In the former, the battle between the two is so wild that the casual viewer might actually wonder whether one or both will die (an absurd idea given the importance of Alfred in the Batman mythos).  Unleashed gives us no real breathing room as Azrael goes after Bruce, his near-strangling quite terrifying if perhaps a trifle unbelievable (both visually and storywise...you ain't gonna kill Bruce Wayne).

As if that old 'run over guy but he won't die' cliché weren't already bad, we got the 'character overhears important information by others who conveniently talk about what she needs to know' bit too.  That I seriously wonder whether such information dump could not have been more clever.

One aspect that troubled me intensely was the level of violence in Unleashed and on Gotham in general.  At the beginning we see Azrael snap a priest's neck and turn his head around.  Now, we didn't get to see the whole thing, but it was just enough to leave me rather appalled at the rather gruesome nature of it all.  It was a quick cut, but it was still pretty evident what happened.

As a digression, the violence on Gotham has become something that worries me greatly, particularly since many children will watch it due to the Batman connection.  This is the second episode where we see a character literally blown up, and while it was clear that it was a figure that was blown up, I still wonder whether the show at times goes overboard with the violence.  In short, if I were a father I would not let my tween to early teen child watch Gotham. Maybe a sixteen, seventeen year old, but no younger, and even then I'd have reservations about letting the sixteen/seventeen year old watch.

Still, for adult viewing, Unleashed has simply so much to recommend.  All the various stories are coming together fantastically.  You've got knockout performances, particularly by Logue as the now almost-heroic Bullock.  For someone whom I understand in the comics was sleazy and amoral, Gotham's Bullock is turning out to be quite heroic, even if it is against both his will and his instincts.  In what could have been another clichéd moment, Bullock gives an 'inspirational' speech to the GCPD that looks to him of all people for guidance.  Logue turns it a bit around in his performance by showing the hesitancy, the general uncomfortableness Bullock has in this, mixed with a righteous fury at what has befallen his Captain.

Logue even allows for moments of comedy when a clearly uncomfortable Bullock goes into the Galavan Family Crypt.  All the things he's done, and this is what bothers him the most?

It's a fantastic performance, as are the ones of both Mazouz and Bicondova as Bruce and Selina, their friendship being strained and tested.  Bicondova has moments of sheer terror as she watches her friend about to fry her alive, and earlier moments of comedy when she literally runs into Nygma.  Both are startled at finding the other, and she asks, "Forensic Guy?" to which he responds "Street Trash Girl?"

Unleashed is simply a showcase for everyone: Powell showing the heartbreak of Butch, RLT in his burning fury at Galavan, Wong at his cold Dr. Strange, Frain especially in playing such a bonkers part with total seriousness.  In fact, the straight manner Frain uses makes one realize just how bonkers everything really is.

Perhaps some of the clichéd bits knock it down, and the violence is still a bother, but Unleashed is still one more simply excellent Gotham episode.

Next Episode: A Legion of Horribles