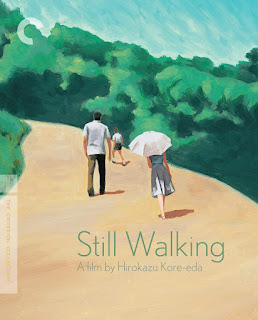 Sometimes the simplest of films, of stories, are the richest. Still Walking is simultaneously uniquely Japanese and universal, touching on elements of grief, regret and potentially hope.

Doctor Kyohei Yokoyama (Yoshio Harada) and his wife Toshiko (Kirin Kiki) are having their children and their own families over for the weekend. Their daughter Chinami (You) and younger son Ryota (Hiroshi Abe) are there, but while Chinami, her husband and kids seem fine, Ryota is not. He is ill at ease there, especially with his new wife Yukari (Yui Natsukawa), a widow with a young son.

The reason for them reuniting now is to commemorate the death of Junpei, the older and favored son. Junpei was going to follow in Kyohei's steps to be a doctor, and Ryota's work as an art restorer is not what the father dreams of. As the weekend goes on, we see that the elder Yokoyamas, outwardly pleasant and respectful, still struggle, as does their son. Weekend over, with vague promises of seeing each other more, we learn that time stops for no one. 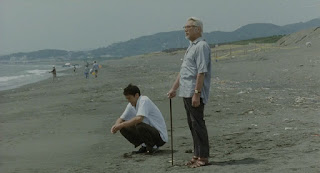 Writer/director Hirokazu Koreeda shapes this story not with big moments, but with small ones. The closest we have to a big moment is when Kyohei attempts to talk his step-grandson Atsushi (Shohei Takana) into the positives of medicine when Ryota walks in. In their tones, we clearly hear that neither father nor son is pleased with the other. Perhaps other productions would have made this a more bombastic, rage filled section.

Instead, Still Walking reveals only their disappointment more than their anger. Almost all of them carry this sense of regret mixed with the grief for Junpei, all of that blending together to impact their current lives. For his parents, Junpei is still the mythical golden child. For his siblings, he is a source of pride and frustration.

Again, in other productions perhaps we would have made the parents more villainous. There are touches of that when they invite the man whose life Junpei saved at the cost of his own. He is a wastrel to them, squandering his life doing nothing. However, when Toshiko becomes convinced that a butterfly that has come into the house and sits on Junpei's picture is Junpei coming back, it is hard to not sympathize with the parents' own grief and disappointment. 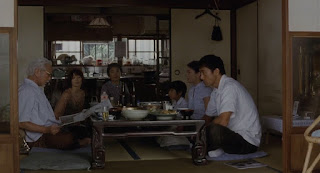 Each performance is excellent, primarily because they are all so quiet. Kiki and Harada excel as the parents, direct and perhaps gruff but also still struggling. As Toshiko recalls their love song, Blue Light Yokohama, we hear in her voice a sense of strained love as Kyohei appears dismissive of the memory. Could those be masks to hide their mix of love and private resentments?

Abe also does very well as Ryota, who carries his resentment over Junpei's shadow mixed with his genuine fears over his marriage and career. Koreeda wisely does not have him or anyone else explode. Again, he gets the actors to convey so much with a quiet method, simple, straightforward.

I think this simplicity and straightforwardness might make Still Walking feel a bit slow, perhaps too quiet for some. Even if it is under two hours, it can feel longer. Nevertheless, one sees in Still Walking a sense that this story is one we can all relate to. The loss of others, the sense of failure or not measuring up, the lost opportunities that we can't get back. These are universal themes.

"We live, with regret, but we live," Ryota recalls when he pays respects to his dead with his new family. For those of us among the living, we remain Still Walking.