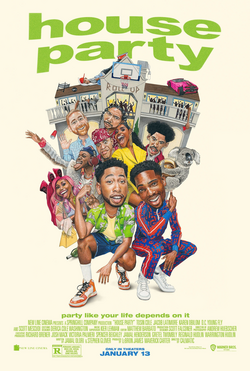 In 1990, a small film featuring a rap duo became not just a big hit but a beloved film, so much so that it was inducted into the National Film Registry. The original House Party was a light, charming affair. Its 2023 remake is anything but. Trading in cringe-inducing stereotypes, with a cavalcade of cameos that might puzzle anyone outside of hip-hop circles, House Party is insulting on a myriad of levels.

House cleaners Kevin (Jacob Latimore) and Damon (Tosin Cole) find themselves in financial straits. Kevin wants to make enough money to pay for his daughter's schooling from pre-K through college. Damon fancies himself a major club promoter but owing to their own incompetence (and being caught on camera literally smoking weed and apparently dry-humping statues), they are fired from their cleaning jobs.

However, there is hope for them both. Damon comes up with the brilliant idea of having a massive house party at their last job site. That mansion just happens to be LeBron James' home. Putting out an APB to party at the King's house, the more eager Damon and more reluctant Kevin have a party that eventually involves crazed koalas, random hip-hop, R & B and basketball stars popping in, a trio of thugs threatening Damon and even the Illuminati. All things, however, end well for all concerned. 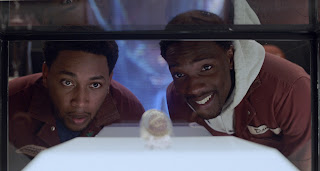 I am loath to compare the original film with a remake because both should stand on their own. I know that the remake may throw in some nods to the original, and I don't object to having cameo appearances from the original cast. It also helps that my memories of the original House Party are not the strongest. What I do recall is that the plot was nowhere near as dumb or insulting as this version.

I think a large part of that is due to how the remake House Party duo is at least a decade older than their original counterparts. Kid & Play were playing high school characters. Latimore and Cole are playing characters who are pushing if not already past 30. As such, we have a wild imbalance between goofy but innocent teen hijinks and grown men (one already a father) who do not shrink from irresponsible to illegal acts. Worse still, the trio of thugs from the Young Threats are just awful, awful stereotypes that are there merely to provide some kind of threat.

Damon and Kevin come across not as lifelong friends but as buffoons who are awful on so many levels. House Party trades in nothing but stereotypes, diving in headfirst into some truly grotesque ideas and acting that in our-post George Floyd/Black Lives Matter era are terribly shocking, even a bit depressing.

Early on, we learn that Kevin's parents are retiring and selling the house to move to Florida. When he asks if he could at least keep some of their kitchen machines, they laugh it off. "Half of this stuff we got in the riots," they chuckle. I do not know if screenwriters Jamal Olori and Stephen Glover thought that was funny, let alone how they thought that was funny. Strange flashbacks to bad DJ jobs by their unreliable DJ come out of nowhere and don't advance the plot.

Perhaps the worst element was on how Kid Cudi, who somehow is a party guest, takes our duo to a gathering of the Illuminati to get a replica of LeBron James' Cleveland Cavaliers' championship ring. It shows how House Party was out of ideas with nowhere to go. It was not going to bother trying to have Kevin and Damon attempt to find this one-of-a-kind ring. Instead, we were going to have this Eyes Wide Shut parody that similarly proved itself pointless. 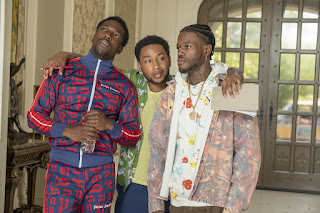 It even somehow ended up being gruesome, with some person's head being cut off quite graphically. I am absolutely astonished that there is more graphic violence in House Party than there was in M3GAN.

House Party is already at a disadvantage for being dumb before the Illuminati get into the picture. Venus (Karen Obilum), the more sensible, upwardly mobile character, would never agree to help these two essentially break and enter as well as put her own job at risk. Yet there she is, dancing up a storm and helping them at nearly every turn.

What was surprising is how lethargic House Party is (and no, that is not a reference to all the pot smoking going on in the film). There doesn't seem to be a sense of urgency or anticipation when they are setting up the actual party. At one point Kevin tells Damon that the party is "out of control", but from what I saw the actual party was remarkably restrained. Did we really need that basketball battle between Damon and LeBron?

My own sense is that no one involved in House Party thought it was any good and knew it. The acting was nonexistent. The various cameos were pointless (though to be fair, I had only the vaguest idea who some of the cameos were and was completely lost on others). The token white character, neighbor Peter (Andrew Santino) was there for no reason apart from providing the koala into the film.

Again, I dislike comparing the original film to its remake. However, it is hard when you have something as wildly divergent as the original House Party and its remake. The original was charming, funny, sweet and openly silly. Its remake is crass, crude, insulting, dumb and unpleasant. There is no joy, no pleasant aspect to it. It is unfunny and a waste of time. Let's call the party off.