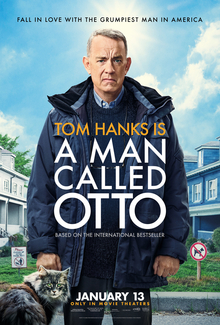 Is there such a thing as a loveable curmudgeon? Apparently, there can be, as A Man Called Otto attempts to prove. It was a nice effort, but it looks like something got lost in the translation from the original Swedish novel and film to what we got.

After his forced retirement and recent death of his wife, Otto Anderson (Tom Hanks) wants nothing more than to enforce the most mundane of rules and kill himself. He does the former with an almost manic venom. The latter though is harder, primarily due to his wacky new neighbors from across the street. Mexican immigrants Marisol (Mariana Treviño) and her pleasant but dimwitted husband Tommy (Manuel Garcia-Rulfo) have two girls, and together they keep interrupting Otto's various suicide attempts with their various requests for help.

Otto marches on through life, helping Marisol (who appears to be the only person he does not have disdain for). He also helps his frenemy's wife Anita (Juanita Jennings), in danger of being removed from her house along with her husband Reuben (Peter Lawson Jones). As Otto contends with life, we see flashbacks to young Otto (Truman Hanks) and his life with Sonya (Rachel Keller). There is their meeting, first date, proposal and tragic loss of their child before her own death.

Eventually, Otto's gruff manner melts with immigrants, children and cats. Fortunately, his crabby ways and early botched suicide attempt lead to using social media to shame those attempting to railroad Anita and Reuben. In the few years Otto has left, they will be generally happy ones with those who love him despite himself. 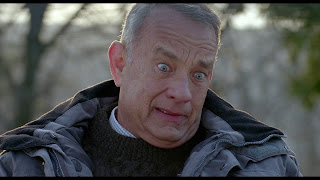 For the life of me, I am astonished that no one, as far as I know, has come up with the nickname "Otto the Grouch" to describe our irascible faux misanthrope. While A Man Called Otto is based on the Swedish film A Man Called Ove, which in turn is based on a novel of the same name, I felt I had seen this story before. The film reminded me, curiously enough, of the animated film Up. It is as if, with some changes, A Man Called Otto was the live-action version of almost everything that happened in Up's opening montage.

It is not that A Man Called Otto did not try to reach my heart. I know that the audience I saw the film with were touched. For me though, there was something slightly calculated about the whole thing. I never believed Otto was as cranky and unlikeable as the film wanted me to believe. Hanks' performance made Otto more curt than truly angry or depressed. Anyone who genuinely wanted to kill himself would have done so regardless of whether they were knocking on his garage door. A Man Called Otto wants desperately to balance whacky with morose, grief among the guffaws. It is a strange blending that does not work.

To be fair, having Otto read a children's story called I Feel...Angry is a clever bit. At least I will put it as a clever bit versus screenwriter David Magee and director Marc Forster's being too heavy-handed with the material.

A major issue is in the editing. For example, we get a scene where Otto watches Marisol and Tommy's girls while Tommy is in the hospital. At the hospital waiting room, a clown comes upon them to entertain them. Very reluctantly, Otto gives the clown a quarter that means a great deal to him (the film reveals why later). We then go to Marisol going outside the hospital and surprised to see Otto coming close to being arrested. After that, we shift back to the hospital where we see Otto going after the clown for not returning the exact quarter that he gave him. 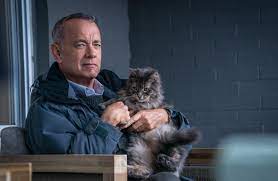 Same goes for the various flashbacks where we see Otto and Sonya's love story. There is something curious about how we go back to a singular turning point in their life together. It does not undercut the story, but it is something we would have already guessed at.

I think Trevino did the best as Marisol, the pert neighbor who genuinely likes Otto and seems mostly oblivious to how cantankerous he is. Garcia-Rulfo had a smaller role as the dimwitted Tommy, but he did well. A Man Called Otto has the novelty of having Hanks' son Truman play the younger Otto. I say "novelty" because the younger Hanks, unlike his half-brother Colin or brother Chet, is not known to have an established acting career. I think this is Truman Hanks' second film overall. He did OK in the film, but his performance suggested, at least to me, that his heart really is not in it.

As a side note, I do not know if featuring Chet Hanks' White Boy Summer blaring from a minor character's car was meant as a tribute or a way to get the other Hanks son in the film, albeit vicariously.

A Man Called Otto aimed to make us care about this irascible yet ultimately caring man. It did not quite hit the mark, but it should appeal to Hanks' generation. Not a terrible film but not as life-affirming as it wants to be.