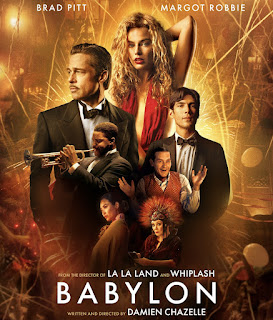 I remember reading with surprisingly great pleasure the Kenneth Anger Tinseltown exposé Hollywood Babylon. Learning that Marlene Dietrich was a "chubby chaser" who allegedly had an affair with Hattie McDaniel was not something I would ever think plausible, but there it is. Babylon, the newest film from cinema wunderkind Damien Chazelle, may have drawn inspiration from the dubious Anger tome. The film does put Hollywood Babylon to shame in terms of gaudy, tawdry elements. Babylon has more than earned its divisive reputation. Some worship it as a turning point in cinema if not human history. I fall squarely on the opposite side: chaotic, incoherent and insane, Babylon is a nightmare of arrogance.

Covering the transition from silent to sound, Babylon goes through various lives that intersect with each other. Young Manny Torres (Diego Calva) is enamored of the glitz and glamour of early Tinseltown. Eager to get in on the action figuratively and literally is Nellie LaRoy (Margot Robbie), a starlet who wants to be a star. Already a star is Jack Conrad (Brad Pitt), who is a box office draw and a lush.

Their lives first connect at a massive bacchanalia high on the Hollywood Hills: Jack as an invited guest, Nellie as a party crasher and Manny delivering an elephant who serves as a distraction to smuggle out a dead woman. Also at this party is chanteuse and intertitle writer Lady Fay Zhu (Li Jun Li), black trumpeter Sidney Palmer (Jovan Adepo) and gossip columnist Elinor St. John (Jean Smart). Over the course of Babylon, our multicultural Oscar-qualifying cast sees their characters rise and fall.

Manny rises from gopher to film executive. Nellie breaks out in film as "The Wild Child". Jack stays high upon the stars, but then The Jazz Singer comes along. The introduction of sound sees this land of decadence swept away.

Jack sees his career fade once sound comes in. Sidney gets to make films via "race" shorts where his trumpeting is a wild success. Unfortunately, he is also black, so there is only so much he can do film-wise. Nellie struggles with the demands of King Microphone and starts sinking into more drugs and gambling. Elinor attempts to make her more posh with disastrous results that literally lead to vomiting. Manny, forever in love with Nellie, attempts to help her, going so far as to deal with psychotic mob boss James McKay (Tobey Maguire), who revels in perversions that would make Caligula blush (to misquote Morrissey).

Ultimately though, time and tide stop for no man. All our characters have tasted fame and found it a bitter and empty thing. Some characters die, some go into self-imposed exile. Manny survives, but now in 1952, a screening of Singin' in the Rain brings him back to those heady days, and the tears along with a love letter to cinema come. 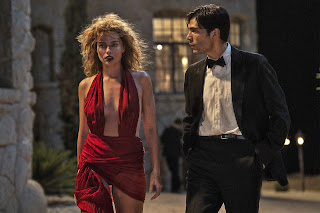 As if that was not already tawdry enough, this sight gag was, I believe, meant to distract the viewer from a conversation between Sidney and another member of his band.

Babylon floods the viewer with such frenetic, over-the-top madness and perversion in the first half hour that is far too much. Yes, one can establish decadence and debauchery in less time. By the time we get to Lady Fai belting out My Girl's Pussy, I think there would be some viewers struggling with motion sickness (the film does enjoy flying all over the place).

A film that features among other things elephant dung flying at Manny, a fight between a woman and a rattlesnake and a man eating a rat hardly seems like a celebration of the magic of cinema.

Babylon is the most chaotic, disorganized film I have seen. Story elements are brought in that are never mentioned again. Moments such as Nellie taking Manny to visit her institutionalized mother, how Lady Fai is both a star and mere intertitle writer, the descent into a literal hell all add up to nothing. The lengthy scene where Nellie is attempting her first sound film runs far too long, especially given that Babylon suggests the entire shoot took a mere eight takes. 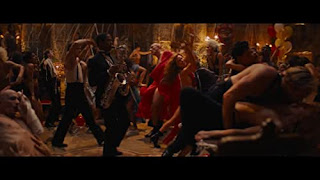 They must have been very long takes, because someone ends up dead. Again drawing from a similar scenario in Singin' in the Rain, the film goes through a nightmare of early sound film technical issues that with sharper editing could have been finished much sooner. Another scene where Nellie (whose career was built as the ultimate flapper) is trying to play things posh comes across as attempting to remake the Singin' in the Rain film within a film The Dueling Cavalier.

Thank Heaven that Chazelle opted not to make The Dueling Mammy.

To be fair, having his black character be made to put on blackface does come close. Yes, there is an explanation for this very unnerving moment. Yes, Babylon wants to make a statement about how African-Americans were pushed into unnerving moments in film (and to an extent are still pushed into such moments). However, Holiday Inn also gives us an elaborate, almost apologetic rationale for its use of blackface. It is curious, at least to me, that the same people who condemn Holiday Inn for its use of blackface appear to see Babylon doing the same as a major cinematic turning point. Yet, I digress.

The same fate of forgetting about people happens to Lady Fay and George Munn (Lucas Haas). He's supposed to be Jack Conrad's BFF, but his sole purpose is to show how he is forever unlucky with women. Informed much later on that he committed suicide, Jack mourns, but the question is "why"? They do not appear that often together, and Chazelle never directs Pitt or Haas to show that they even know each other casually, let alone lifelong friends. 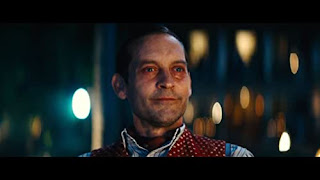 The entire segment with Maguire where he takes Manny to what he calls "the asshole of L.A." is sickening and pointless. Manny's end was reminiscent of, of all things, Pulp Fiction. Albeit unintentionally, Nellie vomiting all over William Randolph Hearst (Pat Skipper) brought back bad Triangle of Sadness memories.

I figure Chazelle was attempting to make a grand statement about how even the most debased freak shows can be entertainment, but Bill Sampson's speech about "the theater" from All About Eve did a better job of that. Again, Chazelle knows much of film history but that does not help Babylon from any standpoint.

Even the few positives I could find, like Justin Hurwitz's score, were tinged with badness. While Voodoo Mama is a great earworm, copying Ravel's Bolero does not help me think Babylon is this masterpiece so many of my brethren insist.

A meandering plot that has a literal elephant in the room, unmemorable to memorably bad performances and a nightmarish length damn Babylon. Some insist Babylon is a love letter to cinema. It is, in reality, a poison pen to film.