I Wanna Dance with Somebody: A Review 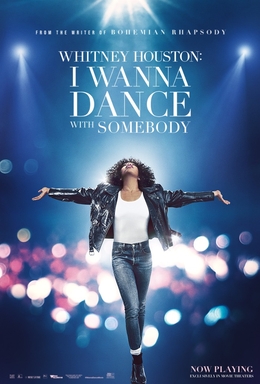 I WANNA DANCE WITH SOMEBODY

Whitney Houston (Naomi Ackie) has an almost divine singing voice. It shouldn't be surprising given that her mother is gospel singer Cissy Houston (Tamara Tunie), and that Dionne Warwick is Whitney's first cousin. Cissy is loving but firm, forever training and pushing Whitney to develop her voice. Whitney, however, wants to do her own thing.

Her own thing includes Robyn Crawford (Nafessa Williams), who goes from best friend to friend with benefits to unofficial girlfriend to personal assistant. None of this sits well with Cissy or John Houston (Clarke Peters), Whitney's father. Nevertheless, Whitney is heard by Clive Davis (Stanley Tucci), head of Columbia Records. He is instantly won over by Whitney's voice and looks, and soon transforms her into a star.

We see her record some of her big hits, the music videos for them, concert performances including her legendary rendition of The Star-Spangled Banner and her feature film debut in The Bodyguard. We also see her marriage to Bobby Brown (Ashton Sanders), her role as a mother to Bobbi Christina, and hints of her drug use. Ultimately, despite going into rehab, Whitney Houston cannot break her drug habit, leading to her death. 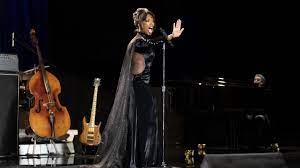 I Wanna Dance with Somebody was written by Anthony McCarten. He is an old hand with musical biopics, having written Bohemian Rhapsody. This is important, because all the criticism the Freddy Mercury biopic received easily apply to the WHITNEY! biopic.

Use of one of the performer's best-known songs for the title? Check.

Deliberately downplaying the tawdrier elements of the biopic subject's life to where the thing that killed them is concealed? Check.

Just as Bohemian Rhapsody was, as I called it, a warts-and-all biopic of Queen and Freddy Mercury minus most of the warts, I Wanna Dance with Somebody is a warts-and-all biopic of WHITNEY! minus most of the warts. Nowhere in I Wanna Dance with Somebody is there the demanding diva, the crazed drug-out harpy, the self-destructive woman. Houston was famous (or perhaps infamous) for her increasingly eccentric public behavior, her crazed devotion to her husband and downright loony antics. 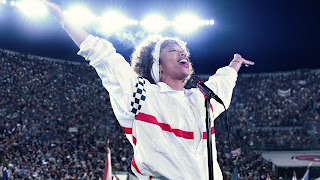 Instead, all we kept getting were the positive moments. The lengths I Wanna Dance with Somebody goes through to downplay Houston's notorious drug use is downright comical. If one judges by the film, the most Houston ever did in terms of drugs is light marijuana use. We see her buying what I presume are harder drugs hidden within a pen (her supplier easily identifiable because he was the only white man "asking for her autograph"). However, if memory serves correct, we never saw her actually use any drugs. I'm not sure we even saw her drink alcohol.

There is not a hint of a suggestion that Houston was entitled, arrogant and completely out of control. Anyone unaware of WHITNEY!'s reputation would think she was almost reluctant to use drugs. When she was sent to a drug rehabilitation center, I actually asked my friend why she would go given we didn't see her use anything of note.

I Wanna Dance with Somebody is an authorized biopic (both Clive Davis and Houston's sister-in-law Patricia Houston served as producers). However, in attempting to downplay if not erase the less-than-glamourous elements of WHITNEY!'s life, I Wanna Dance with Somebody only ends up coming across as shamefully deceptive. The most scandalous element allowed is the less-than-subtle implication that WHITNEY! and Robyn were lovers. This is done by having them kiss repeatedly. They also have a domestic fight when she tells Robyn that she has fallen in love with a man and reverts back to her Baptist roots.

It is curious that I Wanna Dance with Somebody struggles to so much as suggest WHITNEY! had a drug problem but has no problem outing Houston as bisexual or lesbian. It hides what is public knowledge and reveals what is probably not. It just seems such a bizarre decision. 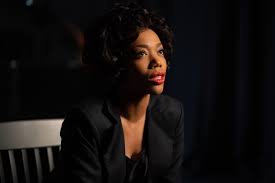 It is not as if I Wanna Dance with Somebody is not trying to be good. Kasi Lemmons is a good director, and she manages to recreate many of WHITNEY!'s best moments. Of particular note is the reenactment of her It's Not Right but It's Okay music video. The sets, visuals and Ackie's performance all combine to make it very close to the original. Lemmons also got some good performances, particularly from Ackie as Houston, at least as far as the script lets both of them work.

Peters and Tunie were also strong as John and Cissy Houston, and Tucci got Davis' voice and mannerisms down. All the actors did what they could with the material they got and bless them for doing all they could to make it work. Sadly, Sanders' Bobby Brown was lost in the shuffle, where both actor and character were barely in the film.

All that work and effort to recreate WHITNEY!'s greatest moments, however, come across as shallow. We got to see WHITNEY! at her best. We just never got to see Whitney Houston, the woman behind The Voice.

Playing more like a "Greatest Hits" long-form music video that whitewashes the less savory aspects of WHITNEY!'s life, I Wanna Dance with Somebody is great for the music but gives us nothing about the diva. Just as Reelz Channel's The Great Pretender was a better Freddy Mercury biopic than Bohemian Rhapsody, their Whitney & Bobby: Addicted to Love was a better and more insightful one for WHITNEY! Come for the music, but leave learning nothing about this talented but troubled, self-destructive woman.