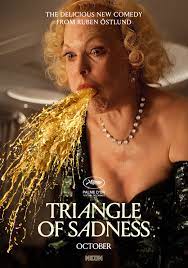 Ah, the idle rich. People who are inept, unaware, slightly if not totally bonkers but have the misfortune of having a lot of money. Triangle of Sadness is, from what I gather, a takedown on the bad and the beautiful. What I actually saw was an unnecessarily long film that hits its target because its target is a million miles wide and an inch deep.

Separated into three parts, Triangle of Sadness begins with Part 1: Carl and Yaya. Carl (Harris Dickinson) and his girlfriend Yaya (Charlbi Dean) are supermodels in a difficult relationship. It is difficult because modeling is one of the few industries where women earn more than men, thus reversing traditional gender roles.

As these two struggle in their relationship, we shift to Part 2: The Yacht. Carl and Yaya board a luxury ship which will serve a mutual purpose: the ship will get publicity from Yaya's influencer status, and she will get to showcase her seemingly fabulous life. Aboard our ship of fools are Russian oligarch Dimitri (Zlatko Buric), his wife Vera (Sunnyi Melles), nice old couple Winston and Clementine (Oliver Ford Davies and Amanda Walker) who made their fortune as weapons manufacturers, tech billionaire Jarmo (Henrik Dorsin) and Therese (Irene Berben), who due to a stroke can utter only "In den Wolken" or "Up in the clouds".

The captain, Thomas (Woody Harrelson) is locked in his cabin, drunk on both alcohol and Marxism. The crew is instructed to cater to the guests' various whims no matter how odd, culminating in a forced swim to please Vera. Unfortunately, this little whim costs the crew valuable time in food and ship preparation. The Captain's diner is a disaster: bad food and a storm causing mass vomiting and chaos. The pirate raid the next morning literally sinks the ship.

At last, we are in Part 3: The Island. Dimitri, Jarmo, Therese, Carl and Yaya survive the sinking, as does Nelson (Jean-Christophe Folly), a black crewmember whom some still think was with the pirates. Also surviving are ship purser Paula (Vicki Berlin) and Abigail (Dolly de Leon), the Filipino toilet cleaner. Abigail is the only one who can build fires and gather food, as our group of elites is either too stupid or too arrogant to do either. Unfortunately for them, Abigail becomes de facto dictator in our One Percent Lord of the Flies world. Her power is so great she can forbid Carl and Nelson from rations after they took pretzels for themselves, then uses pretty boy Carl to satisfy her sexual appetites in exchange for privileges. However, are they truly alone on the island? It may be that they are actually better off than they realize, but Abigail won't give up power so easily.

Triangle of Sadness (the title coming from the area in the forehead that wrinkles) sank for me at Part 2, the longest section of this nearly two-and-a-half hour film. As a side note, the original French title of Sans Filtre (Without Filter) to my mind is even more on-the-nose. I tuned off when we met "Clemmie and Winnie". Naming our war profiteers after Sir Winston Churchill and his wife, Clementine, was too overt for me to tolerate.

A lot of Triangle of Sadness was so terribly overt in its alleged takedown of vapid elites that I am genuinely puzzled how anyone could think it clever, let alone funny. For a comedy, I did not laugh even once at Triangle of Sadness. Given how I managed to laugh at terrible comedies like Bros or Marry Me, it says how poor writer/director Ruben Ostlund worked at this.

I go back to Triangle of Sadness' overt nature. Every thing is spelled out in such large letters that it is never real. Right from the get-go when Carl and Yaya are arguing over the restaurant bill, I saw not plausible real people or even characters. Instead, I saw actors saying words written for them that did not sound real but forced. I know of no couple who would use terms like "gender roles" when having a fight over money.

I do not know any yacht crew, let alone captain (even if he was a socialist lush) who would force his crew to take a swim merely because some rich bitch insisted on it. Everything in Triangle of Sadness is too overt, to openly insincere, for me to accept it as anything other than a bad film that takes up far too much time. 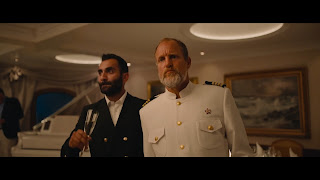 I do wonder if that was the whole point: to make things so openly bad, forced and insincere. All the performances were exactly that: performances. Each actor behaved as though they were not only fully aware they were "acting" but were aware audiences would never see them as remotely real. No amount of posturing would make be believe that, once stranded, the survivors save Therese would not pull themselves together to do work.

It is one thing to take orders from Abigail. It is another thing to meekly submit to her proletariat tyranny. "In there, cleaning toilet. Here, I am Captain," Abigail declares when Paula attempts to pull rank on her. All that Ostlund needed to do was tell them, "Look at me. I am the Captain now!"

Curiously, and this may be a bizarre comment, Triangle of Sadness seems to have taken part of its plot from of all things, a Golden Girls episode. Like in the Season Two episode Vacation, our survivors think they are stranded on a desert island only to discover that they are actually on the wrong side of a resort. I kept wondering why our group of wealthy idiots or our working-class heroine never bothered to explore the island.

Triangle of Sadness is simply too forced in its allegory of the rich abusing their workers and the vapid nature of the beautiful people. Many times we hear and see messages of "Everyone's Equal Now" (words that appear behind the catwalk) but hammering the hypocrisy of this idea over and over again makes it too obvious that no one in Triangle of Sadness really thinks that. Arguing between capitalism and Marxism (Captain Thomas insisting he is not a Communist) as the ship spins out of control, again, too obvious.

As for the notorious vomiting sequence, I was not appalled by it. I have seen vomiting before, so I was not shocked by seeing it on screen.

Since I never bought into this world, I never bought anything in the film. Going all-in on the idiocy only made me aware that Triangle of Sadness was nowhere near as funny or clever as it thought itself. It also made me have some sympathy for its devils. Finally, it is simply way too long.