The Fabelmans: A Review 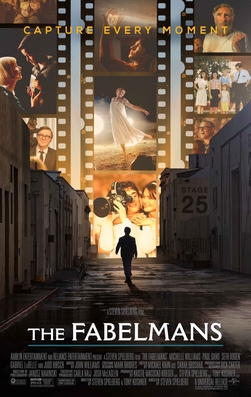 When is a biopic not a biopic? This is the question that haunted my viewing of The Fabelmans, the third film from a major director loosely based on his life (after Alfonso Cuarón's Roma, Kenneth Branagh's Belfast and maybe Paul Thomas Anderson's Licorice Pizza). The Fabelmans is not a celebration of cinema and its transformative power. It is almost a celebration of Steven Spielberg by Steven Spielberg. That does not make it a bad film. It does make it a misguided one.

Sammy Fabelman first fears, then is enthralled by his first movie, Cecil B. DeMille's The Greatest Show on Earth. The climatic train crash in particular both terrifies and thrills him. His engineer father Burt (Paul Dano) and his piano-playing mom Mitzi (Michelle Williams) indulge their son by getting him a train set for Hannukah and letting him use the family camera to film his own train crash.

Burt's computer career takes him from New Jersey to the wilds of Arizona, where they continue being one of the few Jewish families around. Fortunately, the Fabelmans have each other, and the family friend "Uncle" Benny Loewy (Seth Rogen), Burt and especially Mitzi's BFF. Benny, who has a very intense friendship with Mitzi that Burt is either oblivious to or chooses to ignore, manages to move to Arizona too.

Sammy (Gabriel LaBelle) soon wraps himself in filmmaking, taking what would have been a simple Boy Scout photography badge into making a Western that involves his Scout troop and his sisters. Burt is pleased, though he sees filmmaking as a mere hobby. Mitzi is supportive, but Sammy captures her and Bennie being far too chummy on a camping trip. This puts a strain on the Sammy/Mitzi relationship.

This, along with Burt's second move to northern California and her mother's death, puts a mental break on Mitzi. It also ends their marriage, Mitzi too enraptured with Bennie to stay away from him. Sam has his own issues, particularly with the jocks who bully him for being Jewish. Sam manages to get a girlfriend, Monica (Chloe East), though whether she likes Sam for himself or sees him as a project to convert him to Christianity is unclear.

As a side note, I think she's more Catholic than evangelical. I don't know many evangelical Christians who have that many pictures of Jesus in their homes.

High school is heaven and hell for Sam. The highs of making a Senior Ditch Day film, the lows of Monica breaking up with him. Amidst the turmoil, a year heals enough for Sam to push his way to work at the very bottom for Hogan's Heroes. It also gives him a chance to meet legendary director John Ford (David Lynch), who tells him the importance of where the horizon should be. And with that, Sam Fabelman begins his cinematic career. 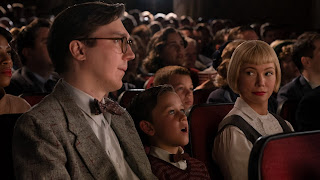 The Fabelmans is as thinly-veiled a Steven Spielberg biopic as Steven Spielberg could make that it almost becomes a guessing game which elements in the film are fiction and which are not. Spielberg has been open about how The Greatest Show on Earth was the first film he remembers and how it influenced his decision to pursue filmmaking. A film that the fictional Sammy and the real-life Steven made as a Boy Scout share the same title: Escape To Nowhere. Sam and Steven were Boy Scouts who reached Eagle Scout status. Steven & Sam both lived in Arizona. Sam & Steve's families were the few Jewish families around whatever neighborhood they lived in. Steve & Sam's parents divorced. Sam & Steve have three sisters.

At one point, one of the bullies, Logan (Sam Rechner) angrily then tearfully confronts Sam about how the Ditch Day movie portrayed him as almost a god-like figure. After they reach a rapprochement, Logan threatens Sam about ever telling anyone about his tears. "I will never tell," Sam tells him, then adding, "unless I make a movie about it". So, we are saying that this did happen, and that hereto unknown bully now has something he considers shameful put on the screen over a half-century later? 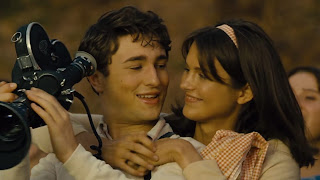 I am at a loss to understand why so many of our Baby Boomer auteurs, entering the twilight of their lives and careers, are opting to make these semi-autobiographical films that are "love letters to cinema". I cannot recall anything like this coming from a Welles, a Capra, a Lean or a Hitchcock. Maybe Fellini's Amacord and Roma, but apart from those I am surprised by this rush of nostalgic films on the early days of a filmmaker's life. The closest I can think of is The Quiet Man, thought that was more John Ford's love letter to his native Ireland than it was to cinema.

Unlike Roma or Belfast, The Fabelmans is simply too close to director/co-writer Steven Spielberg's life to be considered fiction. Those films focused on either outside characters (Roma's maid Cleo) or on a single segment of the filmmaker's life (Belfast's Buddy living through The Troubles) and both for brief time periods. They used these figures as outsiders to see their world and how it influenced them. The Fabelmans, co-written with Tony Kushner, decided to instead go through what seems to be pre-filmmaking life of its subject.

As a side note, I would have loved if The Fabelmans had ended with "not Joan Crawford" slapping "not Steven Spielberg" for trying to direct her in a "not Night Gallery" episode. 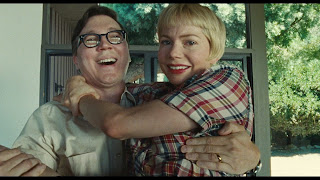 The Fabelmans' greatest flaw is that Spielberg is simply too close to the subject to be objective about it. He is blinded by seeing his life story emerge from the screen to notice some poor performances. Judd Hirsh has one scene as Uncle Boris, a former lion-tamer who warns Sammy that being creative will tear him apart but that it will be worth it. I understand some are suggesting a Best Supporting Actor nomination for this one scene. I am astonished that this Yiddish schtick could be seen as anything other than hammy and over-the-top.

I have no strong view on whether Michelle Williams is a Lead or Supporting Actress in The Fabelmans (though lean towards Supporting). I do have a strong view that Williams makes Mitzi look pretty bonkers from the get-go, and I do not know if that was the intent. She made Mitzi at times hysterical in every sense of the word, slipping into caricature. To be fair, you cannot have lines saying she named a newly acquired monkey "Bennie" and make it sound rational. Rogen was pushing the eternally funny guy bit but was never realistic. As Sam's grandmother observed, "Bennie is not your uncle and he is not funny". True on both counts.

That is not to say The Fabelmans does not have good performances. Gabriel LaBelle makes a strong debut as Sam, a boy who loves film but sees his life as basically an observer. His confusion over the sign of the cross, the hurt about Mitzi's intense bond with Bennie (she states that it did not go beyond emotional infidelity, so I'm taking her word for it) and fear when meeting the legendary John Ford all go so well together. I would say that LaBelle looks a lot like a young Spielberg, which is a problem in attempting to separate fact from fiction. That, however, is not LaBelle's fault.

Paul Dano is excellent as Burt due to him having the least showy part. He has to play calm and efficient, caring but realistic. It is to Dano's credit that he does more by doing less, especially when paired with the all-guns-blazing Williams.

As a side note, as far as I know neither Dano or Williams are Jewish, which makes it interesting how today many audiences insists that only "X actors play X roles".

Finally, there is the issue of the title. I am sure that I am not the only one who noticed the pun of "Fabelman" and "Fable Man". Are Spielberg and Kushner suggesting that they are "fable men", our modern-day Aesops? To my mind, that only adds to a sense of self-aggrandizement to the whole project.

The Fabelmans again is not a bad film. It has some positives, but Steven Spielberg should have followed the Roma/Belfast route where he either focused on a small part of the main character's life or saw it through an outside character. This is a de facto Steven Spielberg biopic made by Steven Spielberg. That closeness, that struggle to separate the director from the character, pushes The Fabelmans as less an homage to the power of film and more the ultimate vanity project.