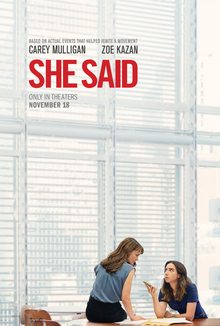 Can a film die from its own nobility? She Said is a film that is fully aware it is "important", along with "courageous" and "noble". It, however, dramatically fails to actually be any of those things, ending it surprisingly hollow for such an important topic.

That figure is Miramax head Harvey Weinstein, of whom stories have been whispered about for decades. Actresses Rose McGowan and Ashley Judd (the latter playing herself) have spoken about their experiences with Weinstein, but have either been dismissed or not heard. Twohey and Kantor start delving deeper into this explosive story.

Their eventually joint investigation is not helped by many people either refusing to speak on-the-record or even speak to them at all. They fear reprisals, career damage and the powerful Weinstein lawyers. Some, however, are still so traumatized by their experiences that they cannot bring themselves to confront their pasts. In one odd circumstance, a non-disclosure agreement signed by Rowena Chiu (Angela Yeoh) and Zelda Perkins (Samantha Morton) strictly forbid them from seeing a therapist about their experiences. Despite all the obstacles and the pressures of their own lives (both Twohey and Kantor attempting to balance work and marriage/children, with the former struggling through postpartum depression), they continue until Harvey Weinstein faces a reckoning. 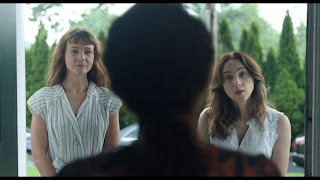 She Said carries with it an air of importance that borders on parody. A particularly unintentionally hilarious moment comes after Kantor speaks with Irwin Reiter (Zack Grenier), a Miramax executive who knows many dirty secrets. After insisting on a five-minute meeting where he constantly looks over his shoulder, Kantor leaves and notices a black vehicle slowly driving behind her. It is only when she looks back and starts walking slightly faster that the vehicle starts to drive away.

It is hilarious because here, She Said wants to push a narrative that Harvey Weinstein is some kind of almost mob-like supervillain versus a powerful and reprehensible figure. The film is apparently inches from suggesting that Weinstein was going to put a car bomb in Kantor's vehicle or train snipers at Twohey's baby. She Said continues to suggest something that never comes across: the menace that Weinstein is beyond pushing women metaphorically and literally.

The film wants desperately to create a sense of menace and fear about Weinstein, but it simply is not there. The "black SUV slowly following our intrepid reporter" was probably the nadir of this suggestion. It may have well happened: I never read the nonfiction book that Rebecca Lenkiewicz adapted. However, it comes across as slightly funny bordering on self-important. Weinstein did pay off several accusers, but the suggestion (vague as it was) that Kantor and Twohey's lives were in literal danger seems absurd. I do not know if Harvey Weinstein, loathsome as he is, would literally murder reporters to silence them. 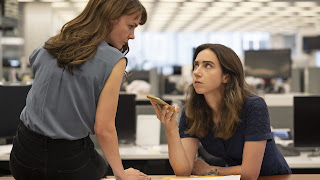 Director Maria Schrader opted for a very sparse manner in She Said, with slow scenes that have little drama. I was surprised that Mulligan and Kazan showed little to no emotion through most of She Said. That is not to say they either didn't show any emotion or tried to. Mulligan snapped furiously at a drunk guy trying to pick her up at a bar, as if she was holding back anger until now. One can wonder why this guy was tipsy at lunchtime, but there it is.

Her anger might have come from the postpartum depression Twohey was suffering from, which apparently was cured by going back to work on such an emotionally-charged story. Through most of She Said, there seemed to be something brittle, on edge about Twohey. Mulligan failed to make her a three-dimensional figure or even the avenging angel she saw herself as. Instead, she came across almost as smug and hostile, particularly when speaking with Lanny Davis (Peter Friedman), one of Weinstein's major lawyers. Mulligan's face expresses barely concealed contempt for Davis, which undercuts the film's suggestion that Twohey was an impartial journalist determined to get to the truth no matter where it lay or what it revealed.

As a side note, this is the second project Mulligan has worked on that has this "avenging angel against the patriarchy" role after Promising Young Woman.

Mulligan and Kazan gave weak performances, though the latter was worse. Her Kantor came across as almost a junior intern in this newspaper world. Some of her scenes, such as when talking with Rowena's husband Andrew (Edward Astor Chin) looked more like filmed rehearsals than actual performances.

As a side note, I kept wondering why Andrew had an Australian accent, though whether that is because Chin the actor or Andrew the character is Australian She Said cannot answer.

In one particularly bad moment, Kantor and Twohey are walking down the New York City streets together. "It's like an ocean of wrongdoing," the former says. "Can you imagine all the Harvey Weinsteins out there?" she metaphorically asks. The line delivery is bad enough, but the dialogue here does not sound like actual speech. It sounds like speechmaking, which is worse.

She Said also has a strange plug for a parallel between Weinstein and former President Trump and O'Reilly. The film begins with what I think is an unnecessary section about Trump's own loutish behavior. I figure the filmmakers were aiming at how the powerful men always get away with it, but it seems a case of gilding the lily or grinding axes.

Patricia Clarkson and Andre Braugher were underused as New York Times editors. Other smaller performances, such as Morton, Yeoh and Jennifer Ehle as another victim struggling with breast cancer, did stand out. It might have been better to have followed their stories versus Twohey and Kantor.

There is a coldness in She Said that weakens the good intentions. It squarely aims for a present-day All the President's Men or even Spotlight. I would argue that She Said borrows very heavily from the latter in terms of production and style. Sadly, it may have tried for its style, but it did not have its substance.

Perhaps She Said's failure comes from the fact that those who were not aware of the Weinstein story never get a great sense that they should care. Weinstein is almost a shadow, someone so powerful he could almost hire assassins to eliminate troublesome women. For those who are aware of the Weinstein story, they also know that the press, rather than being crusading speakers of truth as She Said presents, were just as enabling as those who worked for Weinstein all those years. It is hard to take seriously a film about Harvey Weinstein from an industry that not only went out of its way to cover up his actions but feted him.

Some of us remember how often Harvey Weinstein was thanked at awards, down to Meryl Streep calling him "God". It may not strictly be a whitewashing of Hollywood and the Fifth Estate's role in enabling the abuse, but it is close.