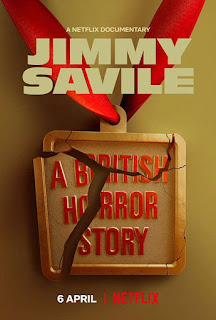 The name Jimmy Savile means little to nothing to American audiences. The British, however, were mad about this flamboyant, eccentric television host. His programs ranged from the kid-friendly Jim'll Fix It (where he granted wishes that children had written to him) to the music presentation show Top of the Pops. His death was mourned by the British public. It also burst wide open what had been whispered about for decades: the Sir James Savile was a pedophile. It went beyond merely lusting after Lolita-type girls. The scope, length and coverup of Savile's sexual abuse was horrifying when uncovered.

Jimmy Savile: A British Horror Story attempts to cover the scandal that erupted when the truth came out. It is unfortunate that in a way, the documentary too fell under Savile's fame to give the victims their time.

Using archival footage from Savile's decades-long career and newly-filmed interviews, Jimmy Savile: A British Horror Story divides its story in two parts. Part 1: Making a Monster recounts his rise from Northern miner to radio DJ, when he grew to become the number-one DJ in the country. With his outlandish behavior and bizarre wardrobe, he became a natural for television. He had a wild persona that also appeared to reveal an extremely charitable one. He soon became a massive fundraiser for hospitals, raising millions of pounds for such organizations as the Leeds General Infirmary, the Broadmoor Hospital for psychiatric help and the Stoke Mandeville Hospital, which specialized in spinal injuries.

This charitable work earned him the affection of the upper echelons of politics. Figures such as Margaret Thatcher and the-then Prince of Wales feted him. The latter even pushed successfully for a knighthood. It wasn't until after he became Sir James that the fainted, most tepid question about Savile's alleged predilection for "little girls" even made print. 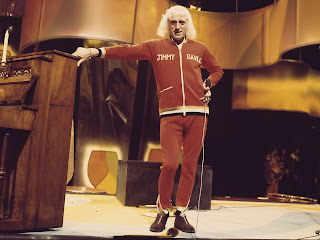 It is only now in Part 2: Finding the Monster, that we begin delving into the nightmare Savile created. Though there had been whispers about Savile, few people questioned his public persona as just merely eccentric. The eccentricities extended to being a porter at the hospitals he raised funds for, with 24 hour access and even private rooms for him. Anonymous letters sent to an underfunded Child Abuse Investigation group from Scotland Yard went unfollowed. When he was finally brought in for questioning in 2009 (two years before his death), he was defensive and dismissive of the allegations.

Moreover, no one was willing to speak publicly to charge Savile with anything. It was only after Savile's death that his myriad of victims felt free to speak publicly of Savile's decades-long predatory behavior had done to them. Friends Reunited, a British version of Facebook, was full of anger and condemnation for all the loving tributes Savile was receiving. The producers of a documentary that Savile's former employer, the British Broadcasting Corporation, had rejected, took their work to the rival Independent Television which broadcast The Other Side of Jimmy Savile on their Exposure program. The scandal horrified the public that had so loved Savile.

Savile's victims had ranged from ages 5 to 75. They dated as far back as the 1950s. Horrifying tales of molestation to rape sickened the public. It was to where Savile's grandiose headstone, down to its cruelly worded "It was good while it lasted" inscription was taken down in the dead of night rather than wait for someone to do it. 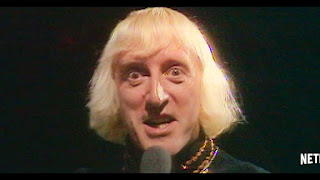 Perhaps the closest comparison that American audiences of A British Horror Story would understand is that of Bill Cosby. The man who had been "America's Dad" being a serial rapist shocked generations who had grown to love "The Cos". Jimmy Savile, however, was more than just an avuncular host. It would be as if a combination Art Linkletter, Bob Hope and Dick Clark had raped children for decades with higher-ups either not interested or covering it up to protect their brand and reputation. The horrors in A British Horror Story, however, did not come as thoroughly as I think they could have and should have.

Director Rowan Deacon had all the elements to make his two-part series gripping television. It could have been a condemnation of the culture of celebrity that shielded Savile. It could have given a voice to the hundred of Savile's victims. Instead, A British Horror Story ultimately ended up being almost curiously fixated on pop psychology and the very celebrity that Savile used to commit monstrous crimes.

We get vague suggestions that Savile's Catholicism and close relationship with his mother may have colored his actions. Could his charitable work have been a way to absolve himself from his crimes? Was there something unnatural about how close he was in his early years to "Duchess" (Savile's nickname for his mother)? The idea that Savile used his charitable work as cover to allow himself entry into places where vulnerable people could be at his disposal appears not to enter Deacon's mind. Rather than suggest that Savile put up a front, he plays on the notion of "Catholic guilt" and potential absolution.

In a sense, that almost seems to let Savile off the hook, to suggest that whatever good he did was a way to cleanse himself from the evil. It would be easier to say Savile was evil and used his position to violate people, full stop.

A British Horror Story also wants to push the Savile/Thatcher and Savile/then-Prince Charles connections into something more lurid. Again, rather than put up the idea that Thatcher and the Prince and Princess of Wales were taken in and duped by Savile, Deacon seems to bring up Savile's connections to the British Prime Minister and Royal Family for unclear reasons.

Thatcher may have heard the whispers of Savile's nymphet fixation, but it is not as if she was procuring young girls for him. It is plausible that HRH the Duke of Edinburgh may have also heard about Savile's attractions to tween girls, but there is no way of knowing he did. A British Horror Story, by bringing this up and putting more focus on the relationships, does not tackle the corrosive nature of celebrity to hide crimes. 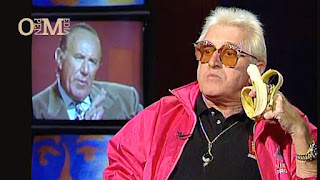 I think a greater focus should have been put on the press, which had the story (or at least inklings of it) and did little to nothing. It's not until close to the end of Savile's life that one reporter, Lynn Barber, does the most gentle inquiry to Savile himself when she asks about rumors that he likes young girls. To be fair, no victim wanted to speak out openly prior to Savile's death. Also, Savile had become close friends with police, who sadly dismissed the accusations against "our Jim".

Still, I think A British Horror Story let the press off rather lightly.

It also takes up too much time going over what the British public already knew about Savile's colorful persona. Part 1 takes up nearly the whole hour and a half covering his career that it gives the last few minutes on a police interview and the first questions asked openly. Part 2 takes so long speculating on how Catholicism might have been a way for Savile to clear his conscience that by the time we get to his crimes, the program is nearly over. Sam Brown is the only victim to speak in A British Horror Story about her experiences on-camera (the few others via archival footage). Her sections are sad and painful to hear: the guilt she carries, the experiences themselves. It seems a terrible disservice to focus more on Savile's funeral than on Brown's story.

One of the oddest parts of A British Horror Story was how much foreshadowing the film does. Savile's comments about his outside activities or open flirtations were, at the time, seen as humorous or at least merely part of his eccentric image. We see a montage of him saying, "My case comes up next Thursday," clearly taken as a joke about his life off-camera but now through hindsight seen as admissions of guilt. Things he said decades ago about the Loch Ness Monster or how he's a "very tricky fellow" can be seen today as creepy. However, at the time, they were not intended as such.

I do not know if one can make the connections between what he said then and what we know now.

As a side note, I thought that My Case Comes Up Next Thursday would have been a good alternate title for A British Horror Story. However, could it have been too jokey for the subject matter?

Jimmy Savile might have done good in the millions he raised for various organizations. There may be, surprisingly, people who still think well of him. Jimmy Savile now is reviled, more so given he got away with it. Jimmy Savile: A British Horror Story is a lesser primer on the monstrous acts he did than a condemnation of a corporate culture and a public too dazzled with fame to bring him to justice. It may have been good while it lasted, but for those who suffered through his evil work, it will never be over. 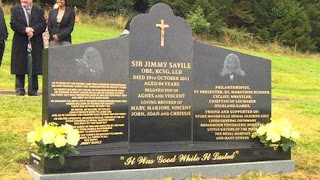