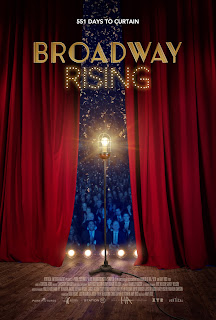 BROADWAY RISING
After the September 11th attacks, Broadway closed for two days and was part of a campaign to bring people back to New York City. Nineteen years later, the lights of Broadway were closed again, this time for eighteen months. Broadway Rising tells the story of those on the stage and behind it on how they struggled but managed to mostly come back. Interesting if at times showcasing some odd tangents, Broadway Rising will interest those who follow The Great White Way.
Interviewing various people over those eighteen months, we learn the triumphs and tragedies of some of Broadway's leading lights and those who keep the shows going. We do get to hear from people as Virginia Claire, who starred as Glinda in Wicked and Tom Kirdahy, a Broadway producer who lost his partner, playwright Terrance McNally to COVID. We also hear from those who work behind the scenes, removed from the bright lights and marquees.
Of particular note is Ernie Paylor, a stage doorman at Jagged Little Pill who due to COVID eventually lost his leg. Dancer Adam Perry may look super-fit, but he endured long COVID as well as a forced change of job from the stage to floral design.
This forced pause as well as the mass protests brought about a reevaluation for others working in theater. Figures like stage director Miranda Haymon and playwright/actress Jewelle Blackman found the lack of black figures and stories on Broadway part of a larger systemic racism in theater. After New York Governor Andrew Cuomo closed the Great White Way on March 12, 2020, the order to reopen came on May 5, 2021, with Opening Night scheduled for September 14. Now the various shuttered productions race to have everything set and ready to welcome people back. 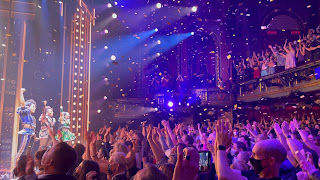 I think people who are not well-versed in Broadway will find some of the stories Broadway Rising tells more interesting than others. We do hear from those whose livelihoods depend on performing, like singer Claire (who became a mother during the interim) or dancer Perry (who sees that as he approaches 40 and with injuries may not be able to continue a stage career). However, I think we sometimes forget the large support crew that works on these shows. It is hard to not think on stage doorman Paylor, who courageously comes back to Jagged Little Pill with a prosthetic leg.
It is also hard not to react emotionally to someone like Kirdahy. Despite his wealth and influence on Broadway, we see he too went through a difficult and painful ordeal; hearing him shift from the present tense "is" to past tense "was" when talking about McNally is a reminder of the loss people suffered due to COVID.
Other elements in Broadway Rising will either puzzle or trigger people. For example, the various Zoom meetings and classes may evoke painful memories of the forced lockdowns and the misery of not having human contact. The various masks may also bring about terrible memories for some.
Director Amy Rise allowed the speakers to say what they thought, but there is an issue with that. The various talks about systemic racism and Broadway essentially not being "black enough" do not relate well with how Broadway Rising is about how the theater survived the worldwide pandemic. The chaos unleashed post-George Floyd may be a worthy subject, but it does not blend well with what people who go into Broadway Rising might think it is about. 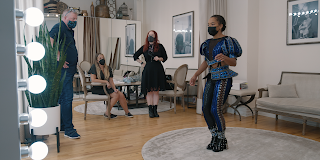 "(Theater) is not void of any systems of oppression, because it is related to capitalism. It is related to supremacy and hierarchy," declares Haymon. How exactly COVID shutdowns are a failure of capitalism or supremacy (and I'm assuming she meant "white supremacy") is left unclear. Going on about Broadway being that "system of oppression" and using the term "BIPOC" may throw people off.
The oddest section may be when we hear from Pass Over playwright Antoinette Nwandu. "We are the healers!", she shouts out to the reunited cast and crew. "We are here to heal our people so they can go out and save the f---ing world!". There is something slightly pompous and contradictory about Nwadu's ideas.
Those elements may be good for a documentary about the lack of representation on Broadway, which is curious given how Broadway is probably more open to minority actors and writers than film or television. That, again, might put people off Broadway Rising. However, on the whole the stories from those who make their living in make-believe begin forced to deal with reality should pique people's interests.