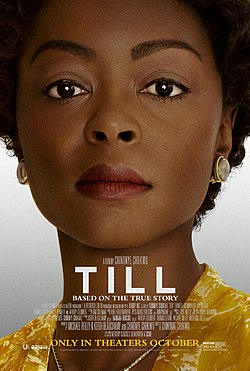 There are, for the most part, two types of biopics. There is the insightful biopic, the type that works to get into the mind of the subject and explore his/her world. Then there is the reverential biopic, the type that works to canonize the subject to where you think he/she almost walks on water. Lawrence of Arabia is a good example of the former. Gandhi is a good example of the latter. Till, the biopic of Mamie Till-Bradley, veers closer to the latter. While it suffers from a perhaps excessive running time and a lack of strong vision, Till is also elevated by a strong central performance.

Mamie Till (Danielle Deadwyler) is forever fretful for her only son, Emmett "Bo" Till (Jalyn Hall). She warns her precocious fourteen-year-old about how different life is for a "Negro" in Mississippi than it is in their hometown of Chicago. Nevertheless, Emmett goes to the Deep South to visit his cousins in August 1955.

Mamie still worries for Emmett, mentioning at least twice that this is the longest they have been separated. Mamie's fears are sadly and horrifyingly founded. While down in Money, Mississippi, Emmett forgets that there are unwritten rules for blacks when they interact with whites. In a wildly misguided effort to compliment shopkeeper's wife Carolyn Bryant (Haley Bennett), Emmett whistles at her. This one wolf whistle sets off a chain of events that sent shockwaves throughout the world.

A few days after the incident, Carolyn's husband Roy (Sean Michael Weber) and his half-brother JW Milam (Eric Whitten) force their way into Emmett's uncle Reverend Moses' (John Douglas Thompson) house and take him by force. As news hits Mamie, in her heart she knows Emmett is dead. His mutilated body is found three days later.

Mamie, against advice, decides to have an open casket so the world can see what was done to her son. This horror is too great for even the Mississippi justice system to ignore, and a trial of Roy and JW is set. Mamie, despite the best efforts of black activists, knows too that these white men will not be convicted. Using her mother's pain, Mamie Till-Bradley will now advocate for true justice for all. 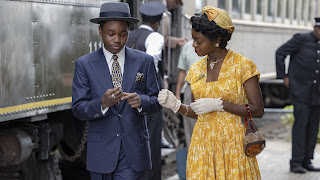 Till tackles a necessary story, particularly in these deeply troubled times when race relations have become so fraught. Till is very respectable, and therein lies the issue. Everyone involved in Till acts as if they are fully aware of the importance of telling Mamie and Emmett Till's story to where it comes close to being remote, a dry history lesson versus a story of a mother's grief turning into courage.

I could not help thinking how strong Till would have been if a more experienced writer and/or director had helmed the film. My mind thought of someone like a Spike Lee or Harriet's Kasi Lemmons, if they or someone else had helmed the project. Instead, it is Chinonye Chukwu in her third feature film who directed and cowrote the film (with Keith Beauchamp and Michael Reilly).

Till feels terribly distant, remote, removed from both the horror of Emmett Till's murder and Mamie's grief & courage. There is something a bit off about most of the acting. I found many of the performances very stiff, ones that suggest the actors were again fully aware that Till is "an important story". It is, and the subject matter merits being treated with compassion and delicacy. Instead, there is an almost odd restraint in most of Till that keeps viewers slightly separate from things.

I do not think it is the fault of the actors, but of their directing. There was an unfortunate element of forced foreshadowing to Mamie's deep anxiety. It might be historically accurate, but it also pushes audiences to be forever waiting for the moment when the situation comes upon us. I in no way advocate for a graphic depiction of Emmett Till's torture and killing. However, by keeping things restrained to the degree they were, the full impact of the horror does not hit the viewer to the degree that I think it should. 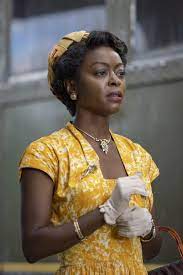 There is also a curious element of introducing us to important figures who should be more impactful. The closing credits mention how Medgar Evers (Tosin Cole), who drove Mamie to where she was staying during the trial, was himself murdered. However, given he and his wife Myrlie (Jayme Lawson) share one if two scenes at the most, it does not have the impact it should have.

As a side note, Whoopi Goldberg, who plays Mamie's mother Alma Carthan in Till, played Myrlie Evers in Ghosts of Mississippi.

That is not to say that we do not get flashes of what Till could have been if helmed by more experienced hands. The scene where Mamie is at the morgue, looking over the mutilated corpse of her only child, is deeply heartbreaking. The entire scene is well-crafted: we are held back from seeing Emmett's brutalized corpse for a long time, then we get bits of what remain, until Mamie finally lets out the deep, shattering wails of grief. It is impossible not to react to this scene of unbearable agony, and Deadwyler is deeply moving here. It again is impossible not to shed a few tears at this moment.

Deadwyler gives a strong performance as Mamie, a woman of true courage who pushes her grief and anger down in the pursuit of justice for both her son and other mothers' sons victimized by hate crimes. It is, however, again the screenplay that restrains her from time to time. For example, I thought Till could have benefitted from a moment where Mamie's firm resolve to show her son in his horrifying condition came about.

Instead, she just comes in and says she wants an open casket. What motivated her to take this step? What struggles, if any, did she have about her taking this momentous step? Till does not reveal them, opting to just move forward. It is curious that later in Till, we get a long take of Deadwyler on the stand, with only the voices of the defense and prosecutor speaking to her. Deadwyler rises above the material, but once again I sense a hesitancy to show the mix of anger, courage and a mother's grief while testifying.

Till was respectable. What it should have been was fiery, passionate, firm. I am glad that Mamie Till-Mobley's story now has been told on film. I only wish it had been done both sooner and better.