Two Documentary Short Film Reviews: Stranger at the Gate and What They've Been Taught

The following are reviews of documentary short films, Stranger at the Gate and What They've Been Taught. 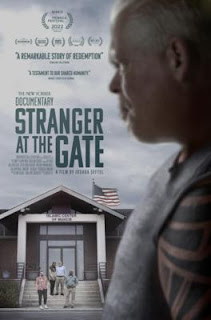 STRANGER AT THE GATE (30 minutes)

Stranger at the Gate tells the story of Richard "Mac" McKinney. A twenty-five-year veteran, his posttraumatic stress disorder affected more than his personal life. Once out of the military, McKinney began to actively consider bombing the Islamic Center of Muncie, Indiana, where he lived with his wife and daughter.

In an effort to case the joint, he discovered to his shock how welcoming the Muslims at the Center were. One of the influential members, Dr. Saber Bahrani, even hugged McKinney's legs, which surprised him. After eight weeks of visiting the Center, accepting the community's welcome, he decided to convert to Islam.

Stranger at the Gate makes clear that McKinney was not radicalized by outside sources but by his own inner demons. Decades of killing Muslims in combat, and the aftershocks of September 11th, turned him into a potential terrorist himself. I say "potential" because he ultimately did not commit his planned attack. Stranger at the Gate reveals universal truths: kindness and compassion are the greatest weapons against intolerance and darkness. This trait of loving others is one taught in many faiths, particularly the three great monotheistic religions of Judaism, Christianity and Islam. It also, not overtly, shows how veterans are in strong need of post-service care. If the Islamic Center members had not treated him with gentleness and caring, things might have turned out very differently to tragic results. Director Joshua Seftel uses his interviews well, with the various subjects speaking directly to the camera. There are no reenactments, though at times the various shots and pauses to suggest the more dramatic elements of the planned bombing were a bit much.

Treating everyone with compassion, with love, with care. Some things are true regardless of one's faith or lack thereof. Would that we all learn and apply such truths. 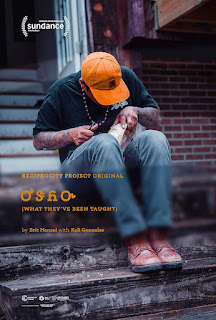 WHAT THEY'VE BEEN TAUGHT (9 minutes)

What They've Been Taught is on the idea of creation. An artist from a Western viewpoint would say he/she "created" a piece. A Cherokee, argues Cherokee Elder Thomas Bent, would not take such a view. Rather, a person is taking the raw material and "making it into" or "making it into a thing". "You are not the Creator," Elder Bent offers.

Rather, we are here as guests. As such, we must have reciprocity with the world. All that is here does not belong to us. We, the living, use what is here but must also leave something behind. It does not have to be something large or monumental. One can offer a simple prayer, and that will suffice.

What They've Been Taught can be seen as a meditation about the world and both what we give and take from it. Director Brit Hensel shows us how a Cherokee takes a piece of lumber and "makes it into a thing", in this case a mask that is worn in the film. The ideas that Elder and first language speaker Bent shares are neither new nor even exclusive to Cherokee. Michelangelo spoke about how he did not create his marble marvels. They were already there, and all he did was bring them out. To be stewards of what we have is an idea found in the Old Testament. This is, I believe, a reason why the Israelites were so adamant about not creating graven images, lest they consider themselves creators who can dare replicate the Creator.

It is a brief film, but it does make one think.

It is curious that the two documentary shorts, Stranger at the Gate and What They've Been Taught, do touch on what I think of as universal truths. There is the importance of treating everyone with love, compassion, courtesy and respect. The idea that "we are all created in God's image" is an ancient one, though too many times we forget to be respectful to our fellow man. We forget that, for all our worries about tomorrow, we are not guaranteed tomorrow. As such, what we do now to, as the saying goes, leave the world better than how we found it, is also so important.

Stranger at the Gate and What They've Been Taught, if anything allows the viewer to pause and think on these truths, and on why we fail to apply said truths.