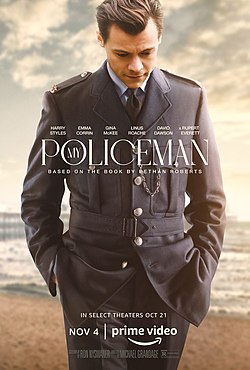 MY POLICEMAN
My Policeman is Harry Styles' second stab at transitioning from pop star to serious dramatic actor. I can see why Styles and/or his team would find My Policeman so attractive (no pun intended). The story revolves around deep romantic and repressed emotions, one that attempts to dive into the tortured lives of a love triangle. My Policeman is a pretty-looking film with era-appropriate styles (again, no pun intended). It also is substandard fare on a subject that we have seen before, save for Harry Styles' ass.
That is new.
Flipping back and forth between what should be present-day and 1957, My Policeman involves the romances of Tom Burgess. In the present-day sections, Tom (Linus Roache) is extremely upset that his wife Marion (Gina McKee) has brought the stroke-afflicted Patrick Hazelwood (Rupert Everett) to their home. Marion struggles with Tom's overt hostility but reading Patrick's journals from his early life and times help her perhaps understand things.
In 1957, young Marion (Emma Corrin) fancies her friend's brother Tom (Styles), just starting his career as a policeman while she begins her teaching training. A furtive courtship begins, but with the twist of a third party. That is museum director Patrick (David Dawson). Tom and Patrick met on police business, and Tom wants Patrick and Marion to educate him on things like music and books.
They soon become fast friends, but the marriage of Tom and Marion is a bit of an issue. As My Policeman goes on, we learn that Tom and Patrick had become romantically and sexually involved, but the closeted Tom would find being an openly gay or bisexual policeman impossible, especially as homosexuality was still a crime. Patrick is not closeted but not openly gay. Marion eventually gets wise to what's been going on.
Patrick and Tom going on a work-related sojourn to Venice is the last straw for Marion, and from there their various lives are affected, ruined and hurt by all these secrets and lies. Will there be a reconciliation of hearts before it is too late? 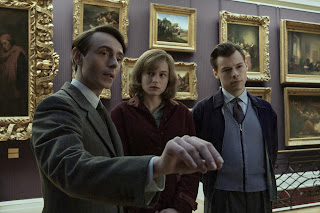 Having indulged in the pleasures of the flesh with female characters (and his director) in Don't Worry Darling, Styles now opts for some potential queer-bating in My Policeman. This story of repressed gay romance, adapted from Bethan Roberts' novel, is frankly a few years too late. It, perhaps through no fault of its own, seems to crib from other gay-themed films like Call Me By Your Name and especially Brokeback Mountain. There is even a scene that, while not exactly mirroring Brokeback Mountain, is too similar to be casually dismissed as accidental.
To be fair, in this version the wife does not literally observe her husband in passionate lip-lock with his BFF, but the suggestion is clear enough for her to be equally, or perhaps more exaggeratedly shocked. I say "exaggeratedly" because some of the acting is borderline laughable. The audience watching with me literally laughing at what is meant as a serious drama validates that idea.
I think Corrin was directed by Michael Grandage to play Marion as if she were playing a caricature of Diana, Princess of Wales. The mostly soft tones, the shy glances, almost suggest she is auditioning for The Crown. Her older counterpart McKee was no better, forcing the drama to veer dangerously close to mannered and skimming farce.
I do not think that it falls on the actors alone. Roache too was forced and exaggerated, really working hard to make the drama real but having the opposite effect. Curiously, this is the second film that I have seen where Roache plays a closeted figure. In Priest, he was the central character, and I think one of My Policeman's major flaws is in how we get not just a maddening back-and-forth but a curiously jigsaw structure from screenwriter Ron Nyswaner.
My Policeman already has a bad habit of jumping from the past to the present, cutting away what drama that was slowly building. Worse, it structures the past in a way that jumbles things much more. We are introduced first to Tom and Marion, with Patrick coming in later. After more past-and-present, we then go back to Tom and Patrick for their story.
Even more confusing, we have present-day Marion reading Patrick's journals and it appears she is shocked by the revelations. They should not be shocking to her because she was fully aware that Tom and Patrick were lovers.
Everett had little to do apart from, in a halting manner, ask for cigarettes. Dawson was much better as the younger Patrick. While a bit more fey to be seen as straight, Dawson reveals a man who has fallen in love with a man who simultaneously returns his affection but locks himself away. Patrick gives himself body and soul to Tom, and unlike Tom is not afraid or ashamed of his feelings and desires.
There is a quick smile when his assistant tells him a policeman is here to see him. To see that smile instantly turn into trepidation upon seeing two other officers coming to question his vices reveals a strong performance. 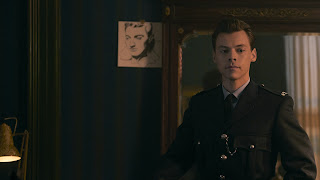 Let us move on to Harry Styles, who now has his heart set on being his generation's Gene Kelly (he sings, he dances, he acts). Harry Styles can be called "an actor" insofar as he is physically capable of saying words written down for him. As to creating a way to make those words sound as if they come from a character, he is not an actor. He has an admittedly pretty but expressionless face. It is a surprisingly stiff face no matter what the situation Tom is in.
What should be a struggle for Tom to express his desires carnal or romantic come across as blank with Styles. Another actor, one with more training and experience, might have made his conflict real. Styles could not. Take the scene where Tom and Patrick consummate their desires. In a slightly drunken stupor, Tom stars running his finger up and down Patrick's neck. This leads Patrick to start fondling Tom, culminating to Patrick going down on Tom. Tom essentially hitting on Patrick comes out of nowhere, as we have had no suggestion that Tom has any interest in Patrick or any other man. Being hesitant around Marion is not proof enough to say Tom is gay.
That conflict, that unspoken desire, never comes across in Styles' performance. Give him credit, perhaps, for trying. However, it is so clear that Harry Styles is trying. He is not acting.
The only time Styles seems to come alive is during the tasteful, dare I say artistic, sex scenes between Patrick and Tom, of which there are quite a few. These scenes are at least more romantic and real than something like Bros. It should be said that Styles struggles not just with a lack of acting ability, but with a script that hampers pretty much everyone.
My Policeman is also hampered by focusing more on the lush production values and score than on the conflicting love stories. Its jumbled screenplay and similarities to other films, plus some cliches such as having soft music playing while Patrick is beaten, pushes My Policeman to be almost a parody of the earnest gay love story. Plot points, such as Marion's BFF having her own secret, come and go. Other plot points are left curiously unanswered.
Why is Marion shocked at Patrick's journals when she knew what he and her husband were up to? What happened after Tom was exposed? What happened in between 1957 and present-day to keep Tom and Marion together? All these questions are left unanswered. I put it to how My Policeman was going hither and yon, unable to focus long enough on anything.
My Policeman is not terrible, but it is rote and sadly unoriginal. Respectable if poorly structured with weak acting save for David Dawson, My Policeman should have been retitled Brokeback Brighton.
DECISION: C+
Posted by Rick at 5:57 PM