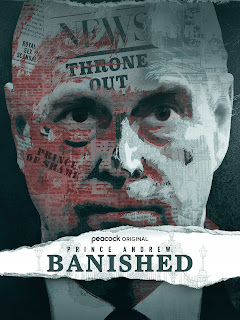 You are the company you keep, or so the saying goes. Prince Andrew: Banished suggests that such is the case with the disgraced Duke of York. A sordid tale of sex, entitlement (figurative and literal), arrogance and immaturity, Prince Andrew: Banished hits mostly familiar marks but moves fast and makes for interesting, albeit sad, viewing.

Using archival footage and recent interviews (including a now-infamous BBC Newsnight interview with Prince Andrew) Banished covers how, over time, the-then His Royal Highness became embroiled in a salacious sex and sex trafficking scandal. As the second son of Her Late Majesty Queen Elizabeth II, Andrew was the spare. As such, he grew up extremely spoiled but surprisingly poor, at least by Royal standards.

While his elder brother Charles was both responsible and wealthy, Andrew flittered about in life. He expected freebies wherever he went. In a certain way, Andrew never grew up: his eccentric collecting of teddy bears testifies to a strange immaturity. Described by one of the interviewees as "an infantilized brat", Andrew had one brief moment of maturity and glory when he served in combat at the Falklands War.

Apart from that though, Andrew made a habit out of making a spectacle of himself. He and his then-wife Sarah Ferguson (aka Fergie) were tacky and tawdry, convinced their Royal titles should give them more than what others thought they were worth. Out in America, two figures soon allowed Prince Andrew to be feted and financially rewarded to the level he thought he should.

There was British expatriate Ghislaine Maxwell, daughter of a disgraced tycoon who nevertheless still managed to move in high circles. With her was American financier Jeffrey Epstein, a man of low reputation. It was a match made in hell: Maxwell and Epstein could bask in the light of a member of the House of Windsor, and said Windsor could be treated to the finer things in life, no questions asked. Among those finer things were a virtual harem made up of underage girls who were not there by choice.

When the scandal over the Duke of York's connections to a convicted pedophile finally broke, it created more than a furor. Prince Andrew's efforts to defend his friendship with Epstein led to a disastrous interview which ended up making things worse. That he thought the interview had gone so well showed a man divorced from all reality. With him stripped of his military and HRH titles by the Queen shortly before her death, Andrew now is just there. 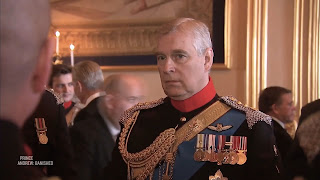 "This entire sorry saga boils down to sex and greed," journalist Annette Witheridge witheringly observed.  Banished paints a pathetic portrait of a pathetic, even almost tragic figure. He was Her Majesty's favorite child (his attending to the Queen at Prince Philip's memorial service despite the scandal attests to that idea). From his birth, Andrew had two terrible flaws: a sense of entitlement and a sense of grievance over his position. Unlike the wealthy Charles or the less wealthy but not extravagant Anne, Princess Royal or Edward, Earl of Wessex, Andrew craved the high life.

To get that high life, he abused his position shamefully and shamelessly. He parlayed a created post of Special Envoy for Trade not so much to promote British industry but to get handouts and shady deals with people of dubious backgrounds. Banished portrays Andrew as essentially a teetotaling sex addict, someone who did not smoke or drink but could not get enough of the pleasures of the flesh.

This addiction to sex and money eventually got him entangled with Jeffrey Epstein, one of the strangest figures to emerge in recent memory. Banished barely touches on Epstein's other shady connections with former and future Presidents Bill Clinton and Donald Trump, understandable given the subject. However, Epstein was a man who moved in high circles, ones that Andrew was delighted to touch on.

In a certain way, Banished makes one almost feel sorry for the Duke of York. Even the few clips from the Newsnight interview make one cringe at how amazingly stupid this man is. Banished suggests that Andrew had been in an entitled bubble for so long he genuinely thought he would be believed no matter how bizarre and idiotic his answers were. It shows a man totally unprepared for the intense questioning, as if he is making up his answers as he goes along.

The Epstein/Andrew connection was a mutually beneficial relationship, and Banished makes the case that a toxic mix of hubris and idiocy brought down more than one individual.

Prince Andrew, Duke of York is not a victim, one of the interviewees states. This is true. Virginia Roberts Guiffre is one of the victims. However, Banished makes one wonder if Prince Andrew's fall was not somehow preordained.

In the end, who would have figured that in among the Yorks, it would be Fergie who ended up the more respectable one?