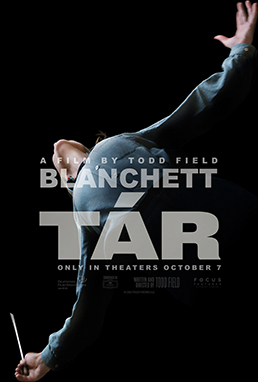 In this age of cancel culture, we have seen more than one artist face a "reckoning" about his/her life. Said artist, or any public figure really, can be living or dead. Tár, the first new Todd Field film in sixteen years, tackles this heady topic. A punishing length pushes Tár down, but the central performance elevates it just enough to make it viewable.

Maestra Lydia Tár (Cate Blanchett) is not only a renowned music conductor and composer, but a legend among the public. Once mentored by Leonard Bernstein himself, Lydia is now among the rare premiere conductors known to the public at large. She is also openly gay and an EGOT (Emmy, Grammy, Oscar and Tony winner). She advocates for more female composers and conductors, serving as mentor and teacher to the next generation.

Lydia is not tolerant of any woke mindset dominating Julliard students. She berates student Max (Zetphan Smith-Gneist) for not playing Bach due to Max being in his own words a BIPOC who thinks of the composer as merely "a white cis heterosexual male". Lydia goes back to Germany, where she conducts the Berlin Philharmonic and her partner Sharon (Nina Hoss) is concertmistress. Lydia is a seemingly detached hard nut to crack, showing only real fondness for their daughter Petra (Mila Bogojevich).

Lydia is seemingly professional with her longsuffering assistant Francesca (Noémie Merlant), but there are storm clouds gathering in the horizon. A former protégé, Krista Taylor, is a shadow on Lydia's life. The exact nature of their relationship is vague, but Lydia advises her fellow conductors not to hire Krista. Lydia is too focused on completing her recordings of all the Mahler symphonies to think on Krista or on her growing fascination with rising cellist Olga (Sophie Kauer). After Krista's suicide, the situation metastasizes into a scandal, one threatening Lydia emotionally and career-wise. Soon other elements start emerging to ruin Lydia, everything from a vindictive Francesca to an edited video of her berating Max, altered to suggest she was saying racist and anti-Semitic things. 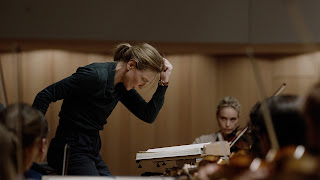 Tár is a punishing two hours and forty minutes, and you feel every single minute of it. For some, this is a good thing. For others, it is a marathon of endurance. I fall somewhere closer to the former, as I found Tár sometimes dragged, particularly in the first half. I joke that at one point, the sudden thunder of music was there to wake the audience up.

Tár may be a bit like classical music: too grand and aloof for even more receptive audiences. Perhaps that is why Field opted to center Tár around this rarefied world. That she was both female and a lesbian would make Lydia more rare, though the film makes clear the latter is not an issue and the former a minor one at that.

As side notes, I remember my city's symphony orchestra having a female conductor: Maestra Sarah Ioannides. It is a curious thing that the male "Maestro" was used for Lydia Tár when "Maestra" has been used with little to no controversy by the few female conductors that have come before. Moreover, I think that the title "Tár" (complete with accent) makes Tár appear more opaque than it ought to be. Even one who would enjoy listening to the complete Mahler collection would look at "Tár" and think, "What ever is that?"

Tár is dominated by cold greys, suggesting a sterile world. The dream or fantasy sequences were too artsy for my tastes, with almost funhouse mirror reflections of potential sexual harassments. A mention by Lydia's predecessor Andris Davis (Julian Glover) of "Jimmy Levine" brings to mind the scandal that erupted when longtime New York City Metropolitan Opera conductor James Levine was accused by several men of sexual molestation. That, however, may be one of Tár's great flaws: it might be too "insider" for most. 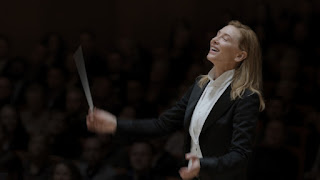 Fortunately, Tár is also dominated by Cate Blanchett's masterful performance. As Linda (Lydia, it is strongly suggested, is a stage name to mask more humble roots), Blanchett is efficient when defending Bach, slicing Max's woke posturing as such. "Don't be so eager to be offended," she counsels. When being perhaps too tender with Olga, or more open with Petra, Blanchett dominates the screen.

We see Lydia as brilliant but also not fully aware of how others see her actions. Her arguments and tenderness with Sharon reveal a woman both lashing out and in need. The big moment is when she storms onto the stage where her frenemy Elliot Kaplan (Mark Strong) takes over her scheduled conducting. It reveals all those suppressed emotions she would not allow herself: vulnerability, rage, fear. The laughter she erupts into when the new owners of the apartment next door ask if she will be "making noise" with her piano playing, along with accompanying mock-song on an accordion, are oddly funny and frightening.

Tár, I suspect, may be a bit esoteric for many. The length too is an issue. I think those issues Tár touches on (accepting the art but not the artist, the fury of mob reactions) could have been delved into better. Despite what could have been negative to criminal acts that Lydia Tár may have done with past females, you do have some sympathy for her at the end. To see this Grande Dame of Classical Music reduced to conducting a symphony for cosplayers is a sad sight. I do not exactly accept the end given how others accused of impropriety have survived, but sad nonetheless.

I can offer the mildest recommendation for Tár, with the added caveat to see it at home. Like in a symphony concert, that allows for an intermission.