Roma is a pretty languid film, moving slowly as we cover a year in the life of a Native maid to a wealthy Mexican family. It isn't a bad film by any stretch, but it is coming close to being perhaps the most overrated film of 2018.

Roma covers a year in the life of Cleo (Yalitzia Aparito), maid to a wealthy Mexico City family in the Roma neighborhood.

As a side note, if you've heard that the family is 'middle-class', I can tell you it ain't. I know of no middle-class family that can afford a housekeeper, a cook and a chauffeur with the house this family had, but I digress. 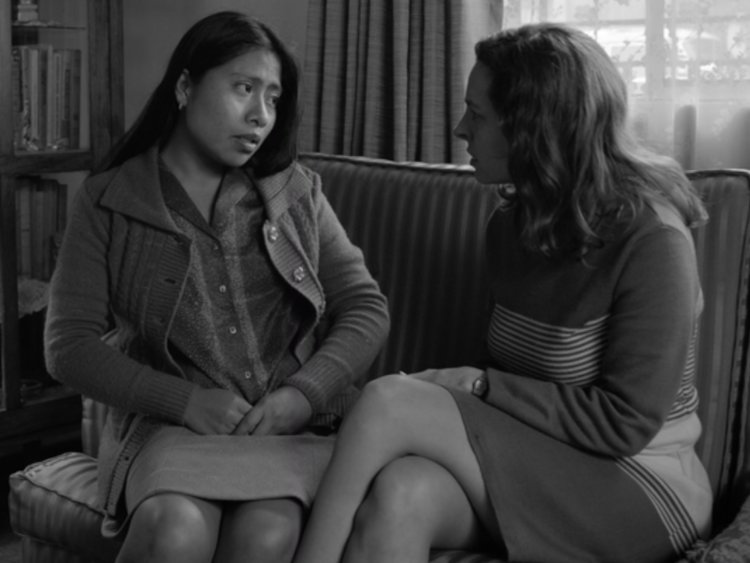 Despite her condition her employer Miss Sofia (Marina de Tavira) stands by her. Sofia has her own issues which play out in Roma: her own marriage to Dr. Antonio (Fernando Grediaga) is collapsing, leaving her to care for their four kids and with only Sofia's own mother to stand with her.

As the year continues, Miss Sofia and Miss Cleo go with the children to the children's cousins hacienda for Christmas and New Year's, where they get hints of the social discontent from the common people to the elites. Miss Cleo and Sofia's mother also see the Corpus Christi Massacre while shopping for a crib. More shocking is that Fermin, who by now has told Miss Cleo not to contact him again lest she wants her and the baby dead, is a paramilitary member who was party to killing a protester who fled to the store for shelter.

The shock causes her to go into early labor and she loses her daughter. As Roma comes to an end, Miss Sofia takes the kids on a 'vacation', but really a way for Antonio to get his things, which she tells the kids of their impending divorce. Miss Cleo tearfully admits she did not want her baby.

At the end of the film, now with us in 1971, Miss Cleo returns to her duties and Miss Sofia has a new start.

Roma is a well-crafted film in that writer/director/cinematographer Alfonso Cuaron keeps things thoroughly grounded. He is especially fond of keeping things at eye level, with the camera moving slowly, almost always from center to right and back again.

I imagine he also was deliberate in evoking his childhood memories with his black-and-white cinematography and at least one shout-out to himself (the clip of the science-fiction film Marooned an echo of his own Gravity).

As a side note, Gravity is known around my house as "two hours of Sandra Bullock crashing into things". The authoress of that quote is my mother, who like Cuaron is Mexican. She has yet to be impressed with his oeuvre, Roma included.

As I think of it, Roma and Gravity have something else in common: the near-lack of action. This year of unfortunate events is slow, perhaps deliberate but not something earth-shattering. That is how it might be, but I was not completely won over to this story of knocked-up maids and their sad employers.

It might be that Miss Cleo was a bit too passive. When Fermin tells her to essentially get lost, he throws in some karate moves and shouts, which make things unintentionally hilarious. Not that seeing him use a shower rod while doing more martial arts full-frontally nude wasn't already hilarious (Mom was howling with laughter at that, which I don't think was the intent).

If I were Miss Cleo, I'd have whacked Fermin in his extensive balls. I know a few Mexican women, and none of them are anywhere as docile as Miss Cleo or even Miss Sofia. They wouldn't get drunk and bemoan how 'women are always left alone'. They'd get drunk and slam their car onto their husband's mistresses.

Roma, I suspect also, has a good deal of symbolism rattling around itself. There's the house, which is spotless on the public/first floor but a mess in the upstairs/family quarters. There's the film Miss Cleo and Fermin are watching when she tells him she's pregnant, where we see a crashing plane. The juxtaposition of a happy wedding after Miss Sofia tells the kids of the breakup with them seeing the celebration is a bit too on-the-nose for my taste. The large car forever struggling to fit into its small driveway, (and even once where Miss Sofia, illogically, jams herself into two large trucks on the street), until she gets a new, smaller car, symbolic of her smaller but more manageable life.

I'll confess not understanding the symbolism (if any) of having some guy dressed as El Cucuy singing some oddball song after the peasants burn part of the hacienda's field on New Year's Eve, but to each his own.

Finally, Roma seems to borrow from early Fellini, such as in the traffic jam that holds up Miss Cleo getting to the hospital or the village where Fermin is at, complete with a campaign rally involving a human cannonball. I saw elements of 8 1/2, La Dolce Vita and I Vitelloni, but again that might just be me.

Give credit where it's due: Aparicio gave a strong performance for being a non-professional as Miss Cleo, the embodiment of a long-suffering native domestic. I would say Miss Cleo is a bit too passive (an earth tremor scene causes her to have no reaction) and she did a lot of staring out, but on the whole when asked to show some emotion she did a very competent job. One also sees Roma as a very nice-looking film with Cuaron keeping things extremely simple.

To me, ultimately, Roma felt like Mexico's answer to The Help: minority maids and the white women who love them. Roma may have been named for the Mexico City neighborhood it is set in, but after seeing it, a better title might have been Diary of a Sad Housekeeper.