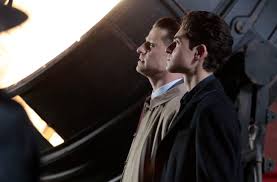 Year Zero, the premiere episode of the fifth and final Gotham season, does what a season premiere should do: set up the stories for the season, in this case a shortened final one. Perhaps this is for the best, as Gotham could be a bit overstuffed in a regular 22-episode run. At last, we have what perhaps we should always have had: a more Bruce Wayne/Batman-centered series versus a Jim Gordon-centered one. Year Zero is not a bad way to start but nothing more.

We get a quick flash-forward to Day 391 of Gotham in the grips of chaos, with the unlikely alliance of Captain Jim Gordon (Ben McKenzie) and Harvey Bullock (Donal Logue) with their frenemies Oswald Cobblepot aka The Penguin (Robin Lord Taylor) and Edward Nygma aka The Riddler (Cory Michael Smith).

Then we shift to Day 87 where we learn what has happened since No Man's Land. The city island is held by various factions, including Penguin, The Scarecrow (David W. Thompson), the Sirens Barbara Kean (Erin Richards) and Tabitha Galavan (Jessica Lucas) and the GCPD. There's mention of a war between Mr. Freeze and Firefly, but we didn't see that, alas.

The Gotham City Police Department is holding on despite being cut off from supplies at the government's orders, but help comes from Bruce Wayne (David Mazouz), who will defy the embargo and bring in a helicopter with supplies. He does this in part to help his own frenemy, Selina Kyle (Camren Bicondova), who gets surgery to keep her alive but may never walk again.

The shipment is attacked, a fight breaks out between Penguin, the GCPD and the Sirens for it, costing Tabitha her life and Penguin to return to hobbling. Each group faces their own internal issues, with Scarecrow causing havoc save for the helicopter attack.

Edward, for his part, is struggling to find himself, puzzled and angered over why he keeps ending up in a different place each night, fighting his dual natures without much if any control over either.

Barbara swears revenge on Penguin, and Captain Gordon, ever loyal to his principles, will fight to regain Gotham for good and for the good.

What Year Zero did, as I said, was set up the stories for this upcoming season. In that respect, it did its job well. We even got a tease about what the future holds: eventually sworn enemies will find it necessary to join forces for a common good/goal.

What we did not get were answers to some questions, which I figure will be teased out later. For example, when last we left Gotham both Edward and Lee Thompkins were essentially dead, placed in the hands of mad scientists Dr. Hugo Strange.

What exactly did he do to Riddler? What did he do to Dr. Thompkins, whom we have not seen? Jumping 87 days leaves us with no explanation as to how Riddler/Ed came back. While we know he will find his way to being his old selves again, I do hope we get an actual answer.

Year Zero also has a bit too much 'poetry', such as when we open with We'll Meet Again playing as our disparate group joins up. Drawing a bit much from Dr. Strangelove?

However, sometimes that 'poetry' worked, such as when Bruce is attacking Scarecrow's men in the dark. We can firmly see Mazouz becoming the Dark Knight, and he really has grown into this complex figure.

There were quite a few standout performances, such as Mazouz and Bicondova, who is drawing on the emotional aspect of our Catwoman as she struggles with her paralysis. Taylor is consistently great as Pengy whether he's raging or being sarcastic, finding humor in the most dangerous of circumstances.

Smith did not have much to do but his confused Edward worked well. I would fault Richards as being slightly over-the-top, but given that's how our Bonkers Babs is, I cut her some slack.

On the whole Year Zero is a good but not great way to set up this abbreviated Season Five. It will be interesting to see not just how much they pack into twelve episodes but how they pack in not just all these characters but the Joker and the upcoming Bane.

Next Episode: Trespassers
Posted by Rick at 12:32 PM